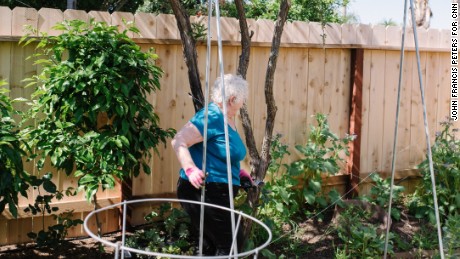 Christine Sheppard is one of more than 800 cancer patients suing Monsanto, the maker of Roundup, claiming the company failed to warn consumers about a risk of cancer from the weed killer. Monsanto insists Roundup is safe.

"I found out something was wrong because my right leg swelled up enormously," Sheppard said. "They did an ultrasound and found I was completely full of these lymph nodes. It was stage IV large-cell lymphoma."
Grueling chemotherapy treatments have started robbing her of mobility. "It's a strange nerve thing," she said. "I don't always know where my feet are. I have to look down to see where they are."
And the symptoms "will be progressively worse. There's no cure. Eventually, I will probably end up fairly immobilized."
Christine Sheppard said she has to take pills every four hours to avoid "hopping and screaming" in pain.
For 12 years, Sheppard had no idea what might have caused her non-Hodgkin's lymphoma -- until a group of cancer researchers reported that glyphosate, the key ingredient in the popular weed killer Roundup, is "probably carcinogenic to humans."
Read More
That's the same herbicide Sheppard said she sprayed on her coffee farm in Hawaii for five years.
"I was incensed," said Sheppard, 67. "We had no idea."

Eventually, I will probably end up fairly immobilized.

Sheppard is one of more than 800 cancer patients suing Monsanto, the maker of Roundup, claiming the company failed to warn consumers about the risk of cancer associated with Roundup products.
Monsanto says there's no proof that glyphosate is carcinogenic. In fact, it cites a report by the Environmental Protection Agency's Cancer Assessment Review Committee that said glyphosate is "not likely to be carcinogenic to humans."
But the former chairman of that committee offered to stop an independent review on whether glyphosate could cause cancer, according to a plaintffs' motion to compel his deposition. And that has left Sheppard even more incensed.

The World Health Organization's International Agency for Research on Cancer caused a stir in March 2015 when it said glyphosate is "probably carcinogenic to humans," meaning it can lead to cancer.
"For the herbicide glyphosate, there was limited evidence of carcinogenicity in humans for non-Hodgkin lymphoma," the report states.
"The evidence in humans is from studies of exposures, mostly agricultural, in the USA, Canada, and Sweden published since 2001. In addition, there is convincing evidence that glyphosate also can cause cancer in laboratory animals."
That report spurred hundreds of non-Hodgkin's lymphoma patients to sue Monsanto.
Sheppard, with her cat Sebastian, said her right leg "swelled up enormously," to the astonishment of her doctor.
Timothy Litzenburg's law firm represents more than 500 of them. He said most of the patients didn't know about a possible link between Roundup and non-Hodgkin's lymphoma until the report came out.
"It would not surprise me in the least if there are 2,000 to 3,000 cases by the end of the year," Litzenburg said. "This is the most-used herbicide in the world ... from the largest farm operations to backyard gardens. It's ubiquitous."

We are suing because our clients got cancer from Roundup.

But many other companies also sell products containing glyphosate. Why aren't they targeted in these lawsuits?
"This is an oversimplistic answer, but Monsanto invented/discovered it, they held the patent for many years, they are the EPA registrant for glyphosate, and they continue to dominate the market," the attorney said.
"Furthermore, we are not alleging that our clients got cancer from glyphosate alone. We are suing because our clients got cancer from Roundup. ... Roundup contains animal fats and other ingredients that increase the carcinogenicity of the glyphosate."