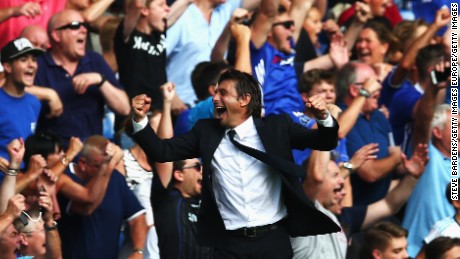 (CNN)A year on from one of the worst top flight title defenses in the history of English football, the Premier League trophy is once again in the hands of Chelsea.

After a campaign of ignominy and disharmony under Jose Mourinho, the Blues are 41 points better off than at this stage in 2015/16.
Read More
While Mourinho was the architect of his own downfall -- squabbling with club doctor Eva Carneiro before his undignified departure in December 2015 -- Conte has been the architect of Chelsea's revival.
His passion is infectious, and emanates from every pump of the fist.
Chelsea can conceivably finish this season with 93 points -- the most by any Premier League team aside from Mourinho's record-breaking side in 2004/05.

But how have they done it?
Conte used the word "work" 21 times in his first Chelsea press conference in July 2016.
The Italian made it clear that the players he had inherited would need to "fight," insisting, "When you finish 10th in the league ... the problem is not only one person."
He was right. That person, Mourinho, left because of alleged "palpable discord" in the changing room, but the issues at Stamford Bridge ran deep.
Interim boss Guus Hiddink may have steadied the ship following his appointment in December 2015, but Chelsea still finished just 13 points above the relegation zone and as close to 18th as sixth.

I hope we can surprise people, that there is a small flame flickering that can grow into a blazing inferno — Antonio Conte, July 2016

Of the three clubs that made headline managerial appointments ahead of this campaign, the greatest expectations came from Manchester.
City and United spent a net total of $245 million on new players between them in the summer of 2016, rekindling the rivalry between Pep Guardiola and the Special One.
Conte, meanwhile, quietly went about his business.
He had been here before, taking charge at Juventus when the Italian club was similarly resurfacing from the abyss -- coming to terms with the "Calciopoli" corruption scandal and Juventus' resultant demotion to Serie B.
Within a year, the former midfield general had led Juve -- dubbed the "Old Lady" -- to the Serie A title, the first Italian side to do so unbeaten since 1979.

Conte's influence was sufficient to prompt Juventus defender Leonardo Bonucci to compare his boss to a "hammer."
Fellow Italian Andrea Pirlo, meanwhile, wrote in his 2014 autobiography: "When Conte speaks, his words assault you."
The new manager has certainly shaken Chelsea's fallen stars into action.
Only Neymar boasts more completed take-ons than Hazard in the top five European leagues this season.
Between August 2015 and 23rd April 2016, star player Eden Hazard didn't score a single Chelsea goal.
Mourinho had claimed his forward was the "best player in England" but, just as he had thrilled on his way to winning the 2014/15 PFA Player of the Year, Hazard quickly became symptomatic of the club's wider malaise.

Antonio Conte: 'I felt in my heart to go and clap the fans and also wish every single Middlesbrough player good luck for next season.' pic.twitter.com/0WToUqB1tv

Under Conte, the twisting, turning Belgian has thrown off last season's shackles to score 15 goals in 35 appearances.
Now he epitomizes Chelsea's dynamism.
This season, he has completed over 50% more take-ons per game (dribbles past an opposition player) and taken twice as many shots.
The 26-year-old could have passed when he picked up the ball in his own half during February's fixture against Arsenal.
Instead, he shrugged off the attentions of Francis Coquelin and waltzed past the Arsenal back line before slotting past