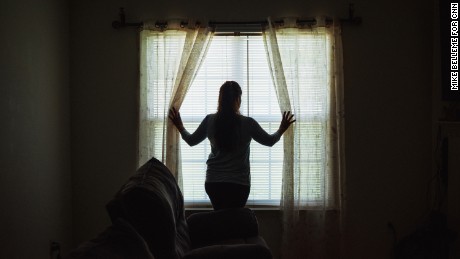 Miriam, a 39-year-old undocumented immigrant from Mexico who's lived in the United States for more than two decades, just bought her first house last year in Winston-Salem, North Carolina. But the housekeeper and cook says she's afraid to decorate much or invest more in her home as the threat of deportation looms. "Fear is growing," she says.

Winston-Salem, North Carolina (CNN)The protesters chant in English, then in Spanish, as they belt out their rallying cry.

"The people, united, will never be defeated!"
"El pueblo, unido, jamás será vencido!"
Winston-Salem's leaders are hours away from deciding whether to declare this a "welcoming city" for immigrants. And at a rally on the steps of City Hall, supporters of the measure are making their case one last time.
"Now do it in Arabic!" someone shouts. Demonstrators cheer as a woman wearing a hijab approaches the microphone.
Read More
But then, everyone freezes. A counter-protester paces in front of them, briefly sending a chill through the crowd. Some people laugh. Others look stunned.
The woman is wearing a bright red T-shirt that says "TRUMP 2016." She has a matching sparkly flower in her hair.
She doesn't say anything. And she doesn't have to. The hand-written cardboard signs she's carrying make her message clear:
"President Trump says NO! Obey the Law!"
"A Sanctuary City is against the LAW of our land."

Two views of the future

Valeria Rodriguez Cobos glares at the woman in the Trump T-shirt. She's frustrated to see her getting so much attention, even though the woman is far outnumbered by pro-immigrant protesters.
Rodriguez Cobos has been coming here for months as part of a group of activists pushing for Winston-Salem to become a sanctuary city. The 25-year-old's mission: using her voice for those who have none.
She has a green card, but most of her friends and family don't. And as she stands on the steps of City Hall tonight, she knows she's carrying the weight of thousands of people who need help, but aren't here simply because they're too scared to show up.
The neighbors who panicked when they saw a white van circling their apartment complex, terrified that ICE agents were about to swoop in. The children at her church who went running when police neared their playground. The friend who just asked her to take care of her kids if she gets deported.
The counter-protester winds her way into the building. A demonstrator waving a sign saying "HUMAN RIGHTS" follows close behind.
The crowd resumes chanting, louder than before.
A proposed resolution declaring Winston-Salem a "welcoming city" brought a contentious debate to City Hall and drew sharp criticism from state lawmakers.
From inside, Joan Fleming can hear them. And it's making her uneasy.
She thinks back to riots she lived through as a child growing up in the 1960s. Her father was a police officer then. She thought of him as she came to City Hall today, carrying an American flag tote bag stuffed with petitions. He raised her to respect the importance of law and order.
Back then, when violence flared during protests, she'd wait by the door of her family's home in Kinston, North Carolina. Every night she feared her father wouldn't make it back alive.
Now as she sits inside the City Council's meeting room, those fears have been replaced by new ones -- growing concerns about what Fleming believes could be just around the corner, and what she feels is lurking in plain sight.
She's already warned the City Council about what she fears will happen if they pass the "welcoming city" proposal: Felons will flock to Winston-Salem.
"There are thousands of chances per month for you or your loved one to be killed by a suspected illegal drunk driver," she told officials at last month's meeting.
Tonight she hopes they'll remember what she said.

Echoes of a larger fight

This was the scene on Monday, April 17, in one corner of Winston-Salem, North Carolina, as a controversial vote loomed.
But it could be anywhere in America in 2017, as increasingly divisive debates over immigration expose feelings simmering beneath the surface.
President Donald Trump made cracking down on illegal immigration a focal point of his administration.
He took steps to retaliate against so-called sanctuary cities, vowing to cut off funding to local governments that don't cooperate with the feds. He doubled down on his message that undocumented immigrants can be a danger to communities, creating an office focused on victims of immigrant crime.
Critics say Trump is highlighting crime as a pretext for plans to kick out as many undocumented immigrants as possible, regardless of whether they pose a threat.
Since he took office, immigration arrests are up and illegal border crossings are down. But so far, Trump also appears to be deporting fewer people than his predecessor.
It's too soon to say whether these early numbers will translate into a trend.
But spend a day in this Southern city, where the salvos of national political battles echo loudly, and you'll see signs of a deepening shift beyond what's measured with statistics in spreadsheets.
Tensions are high. So are suspicions. And there's one thing both sides have in common: fear.

At first, Dan Besse thought his resolution declaring Winston-Salem a welcoming city would sail to approval.
The city already prides itself on being a place that's made immigrants feel at home. Industrial, manufacturing and construction jobs, plus a low cost of living, made Winston-Salem an attractive destination.
Now the city that once saw race as a matter of black and white is more than 15% Latino -- the largest percentage in any major city in the state. More than 10% of its residents are immigrants. And the Pew Research Center estimates that about 25,000 undocumented immigrants live in the metro area, roughly 4% of the total population.
Besse is an attorney who's been on Winston-Salem's City Council since 2001. He thought his proposal wouldn't rock the boat much because it wasn't creating new rules or overturning any old ones. But he'd heard about mounting fears for immigrants in his city -- about parents who were too scared to take their children to doctor's appointments or leave them in after-school programs, about threats to local mosques.
And he wanted to send a symbolic message.
"A lot of folks don't feel safe," he said, "and they really need this kind of reassurance that their local elected representatives are on their side."
Dan Besse, a Democrat on Winston-Salem's City Council, saw his "welcoming city" resolution as a palatable compromise. Instead, it became a flashpoint for the national immigration debate.
So at a February meeting, Besse unveiled a resolution that he says intended to do just that. It was a compromise move that skirted the word "sanctuary" and some of the more controversial measures activists had proposed, such as a pledge to limit cooperation with federal law enforcement.
Among its proclamations: "Whereas, the current national environment of excessive fear and suspicion directed by some toward immigrants, refugees, and other newcomers calls for cities like Winston-Salem to reaffirm our commitment to providing a welcoming and inclusive community for all."
In this left-leaning city with a City Council where seven of the eight members are Democrats, it was the kind of message that sounded like an easy sell.
Maybe a few years ago, or even a few months ago, it would have been.
Besse's proposal cleared a committee and seemed to be gaining steam among his colleagues. But it wasn't long before it sparked an uproar. First local Republicans rallied against it. Then state elected officials took aim.
At a meeting in Raleigh, they told Winston-Salem to bury the welcoming city measure or risk losing funding.
"There will be consequences if Winston-Salem does this," one state senator warned.

As she gets ready for the vote, Joan Fleming sits at her kitchen table, staring at her laptop screen.
A wood carving of the continental United States hangs behind her, near metal sculpted into cursive lettering that says "Faith" and "Love."
A magnet on her refrigerator says, "Friends don't let friends vote Democrat."
The lifelong Republican is no stranger to rallying around a