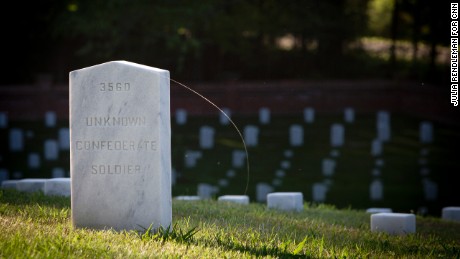 Petersburg, VA - April 26: A few Confederate soldiers are buried at Poplar Grove National Cemetery, their grave markers are distinguished by a pointed, instead of rounded, top. (Photo by Julia Rendleman for CNN)

(CNN)The first time Carol Hull set foot on Poplar Grove National Cemetery near Petersburg, Virginia, she was focused on a single grave -- that of her great-great-grandfather.

But as she continued to visit the 9-acre cemetery, the gratification of finding him grew into a festering anger.
The burial grounds were in disheartening disrepair.
The grave markers for identified Civil War soldiers, which had once stood upright, years ago had been removed, cut shorter, and laid flat on the ground. Many of the headstones were damaged and broken.
Hull was outraged. "His life was every bit as important as those (buried) at Antietam, Gettysburg and Arlington," she said.
Read More
Carol Hull during her first visit to pay homage to her soldier ancestor.
Hull's great-great-grandfather and the thousands of soldiers who lie around him in Poplar Grove recently were granted that respect.
After years of decline, the cemetery was rededicated late last month following a comprehensive rehab. The story of the effort to correct a wrong is being told this Memorial Day weekend with tours. Officials concede that no other National Park Service cemetery has required this level of work.
But it was a long time coming.

How the cemetery fell into disrepair

Water covers graves after a rainfall before the rehabilitaton project began in late 2015.
Poplar Grove's plight was the result, at least in part, of misguided good intentions and lack of resources.
In 1933, the care of the cemetery was transferred from the War Department to the National Park Service, which had little experience in managing cemeteries.
To save on grass cutting costs and to create a more parklike appearance in the cemetery, officials decided during the Great Depression to alter the headstones. Some 2,300 upright markers were made into flat stones, and about 3,400 blocks for the unknown were sunk into the ground, increasing the risk of damage and wear. In some instances, multiple soldiers are buried in one plot.
The "Tombstone House" a few miles from the cemetery was coated with the lower part of headstones.
For the upright headstones to be converted to flat ones, the bases of the stones had to be cut off. Hundreds of those bases were sold to a nearby resident, who used them on the exterior of his home and to pave a small sidewalk.
In the following decades, no significant upgrades were performed at the cemetery, which is maintained by Petersburg National Battlefield.
The headstones had weathered, many becoming indecipherable and broken; the recessed federal shield filled with grime. After rainfall, water would pool occasionally on graves.
The cemetery's wall lost bricks. Its flagpole collected rust. Its lodge looked tired.
"The appearance of a cemetery must be excellent, said Sara A. Leach, senior historian with the National Cemetery Administration, an agency of the Department of Veterans Affairs that advised the park service. "The headstones are clean, no debris around. The grass is green and the sod is even."
Dawn Caruso, of Succasunna, New Jersey, first visited in 2012 to see the grave of her ancestor, Pvt. James M. Leonard, who was killed in 1864 at age 19. "We were absolutely horrified with the cemetery, how it was not cared for," she said.
Still, though there was no money for a thorough overhaul, park staff did what they could to maintain the grounds.
Park ranger Betsy Dinger first began working at the Petersburg National Battlefield nearly 20 years ago, and she built a rapport with descendants of soldiers. Each Christmas until the cemetery closed for repairs, Dinger placed a wreath on Pvt. Leonard's gave.

Workers put in new headstones last summer at Poplar Grove National Cemetery.
Thousands who gave the last full measure of the devotion, to borrow the words of President Abraham Lincoln, had found themselves in a degraded final resting place at Poplar Grove.
All but a few dozen of the 6,100 graves in the cemetery belong to Union soldiers. A few Confederates and veterans from the Spanish-American and both world wars also rest at the cemetery.
Among the Civil War fallen are Native Americans, 331 African-Americans and two Medal of Honor recipients. About one-third of them are known.
Pvt. James Dixon enlisted in Maryland.
Besides grass cutting and an annual placement of flags, for a long time there wasn't much programming or attention given to Poplar Grove, Dinger said. There are opportunities to talk about the diversity of those interred at the cemetery.
Hull's great-great-grandfather, Pvt. James Manassa Dixon, was killed in August 1864 during the prolonged Federal siege of Petersburg. The 21-year-old soldier with the Maryland 4th Regiment Infantry left behind a wife and young daughter.
Hull, from Hagerstown, Maryland, said the family for years didn't speak much about the Civil War; members fought for both sides. "You can imagine that it was a sore subject," he said.
<img class="media__image media__image--responsive" alt="The faded grave marker of John Stine (below) once lay on the ground at Poplar Grove National Cemetery." data-src-mini="//cdn.cnn.com/cnnnext/dam/assets/170427134740-04-07-poplargrovecemetery-15-small-169.jpg" data-src-xsmall="//cdn.cnn.com/cnnnext/dam/assets/170427134740-04-07-poplargrovecemetery-15-medium-plus-169.jpg" data-src-small="//cdn.cnn.com/cnnnext/dam/assets/170427134740-04-07-poplargrovecemetery-15-large-169.jpg" data-src-medium="//cdn.cnn.com/cnnnext/dam/assets/170427134740-04-07-poplargrovecemetery-15-exlarge-169.jpg" data