Texas lawmakers are asking President Donald Trump to help them build a wall – no, not that wall. Instead of a border wall built to keep immigrants from crossing into the state illegally, this wall would protect the critically important cities of Houston and Galveston from the devastating storm surge of a powerful hurricane.

Texas General Land Office (GLO) Commissioner George P. Bush sent President Trump the request in a letter, which was cosigned by more than 60 state and local leaders in Texas this week, asking for “$15 billion in federal funds to protect this vital area.”

The Houston and Galveston bay areas are critically important to our national infrastructure, with 428 million tons of cargo flowing through the region annually. In fact, the Port of Houston and the Port of Beaumont are the 2nd and 4th busiest ports in the United States.

Each line represents a hurricane that has tracked within 50 miles of Galveston, Texas since 1850.
Judson Jones/CNN

The region is also a critical hub for the nations petrochemical resources. The nation’s largest Strategic Petroleum Reserve is in Freeport – which is responsible for over half the country’s jet fuel and the number one energy supplier to the US Military – which makes protecting it “crucial to national security” said Bush in the letter.

Unfortunately, this economically vital region is also extremely vulnerable to hurricanes with 20 different hurricanes coming ashore within 50 miles of Houston since records began in 1850.

This includes the Great Galveston Hurricane of 1900, which killed at least 8,000 people and is the deadliest natural disaster in US history.

Despite this, Texas leaders warn that the bay area is “largely unprotected from hurricane related storm surge.”

This vulnerability was highlighted in September of 2008 when Hurricane Ike devastated the Texas coast, causing $29.5 billion in damages and killing 74 people. Ike was the third costliest hurricane in US history, but could have been significantly worse.

The storm did not hit the Port of Houston directly, and weakened to a category 2 storm before landfall. In the letter to President Trump, Commissioner Bush claims that “a direct hit from (Hurricane Ike) would have resulted in over $100 billion in damages.”

The most critical piece of infrastructure in the proposed coastal barrier system will likely be something called the “Ike Dike,” a combination of seawalls like the Galveston Seawall, natural-looking embankments along beaches, and flood gates at the bay entrances, designed to protect the coastline from storm surge. The Ike Dike was initially proposed by Dr. William Merrell, a professor and researcher at Texas A&M University in Galveston, shortly after Hurricane Ike hit the region.

A large part of the city of Galveston, Texas was reduced to rubble, as shown in this September 1900 photo, after being hit by a surprise hurricane Sept. 8, 1900. More than 6,000 people were killed and 10,000 left homeless from the Great Storm which remains the worst natural disaster in U.S. history.
AP

“I saw what happened to people when Ike hit,” said Merrell, “many left and never came back.”

“Poor people were impacted disproportionately,” Merrell told CNN, “and for them there is no recovery, protection is the only way to do it.”

The idea of investing in protection, rather than in recovery after the storm, is one that has been gathering steam over the past several months. The idea of a “coastal spine” consisting of barriers, walls, and gates “naturally had some naysayers,” said Merrell, “but over time we have been able to show them that we can integrate the system into the fabric of the coast, and we have built pretty broad support for the project.”

The support is evident in the wide variety of local leaders that signed their names to the letter sent to the President Trump, which includes more than 20 of the regions mayors and numerous chamber of commerce presidents.

The concept of the Ike Dike leans heavily on existing seawalls and floodgates in the Netherlands. The Dutch Delta Works project, which protects the vulnerable coastline of the Netherlands from strong North Sea storms, has been called one of the “seven wonders of the modern world.”

“The engineering is nothing new,” says Merrell told CNN, “it’s worked for the Dutch for 26 years.”

Merrell further explained that the flood gates that protect Rotterdam are 1,183 feet wide, whereas the ones designed for the Houston ship channel are about 800 feet.

While $15 billion is a significant price for the “hurricane wall,” a look at the numbers shows it is likely money well spent (and after all, “the other wall” President Trump wants to build in Texas is likely to cost between $12 billion and $21 billion). 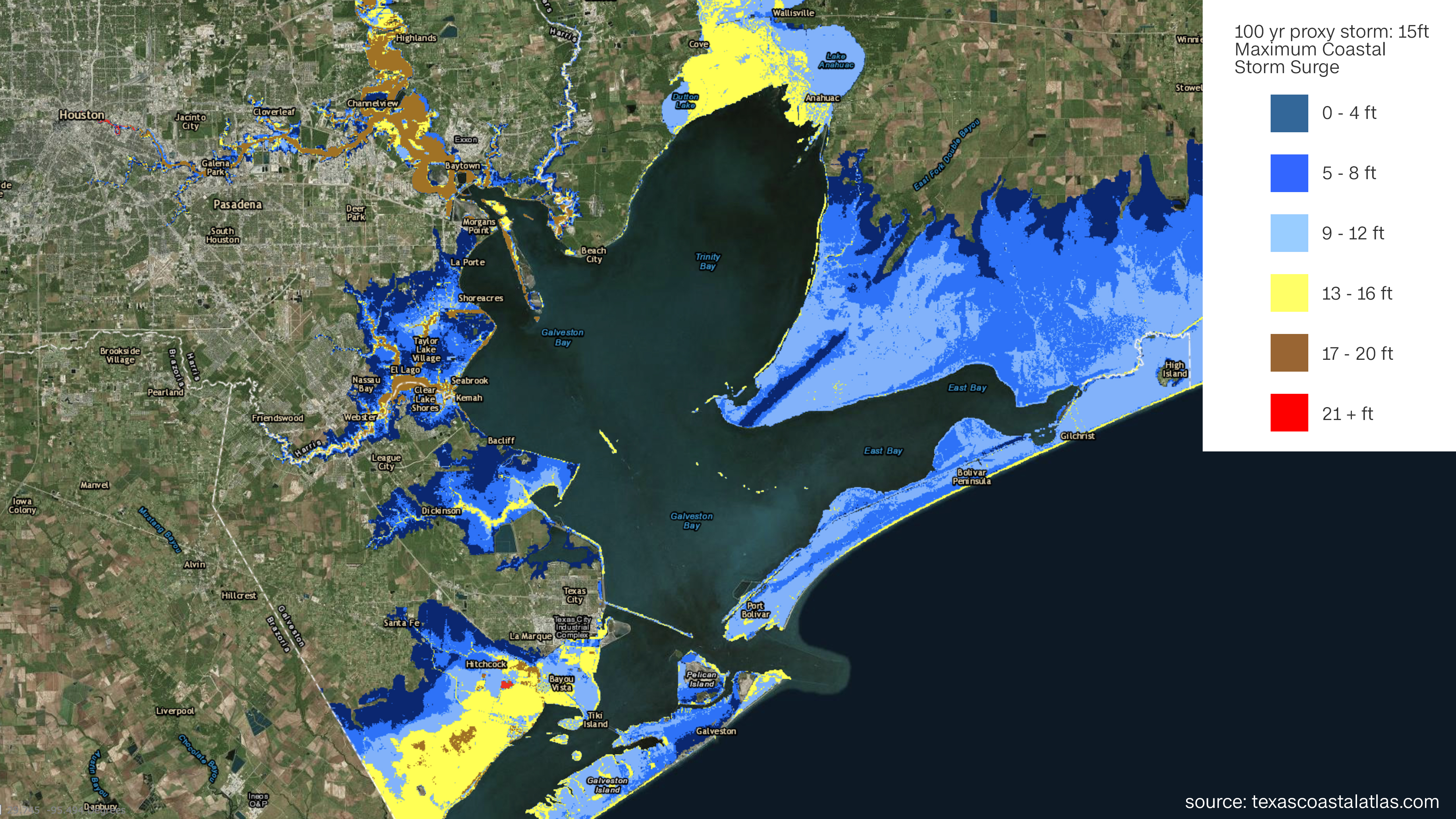 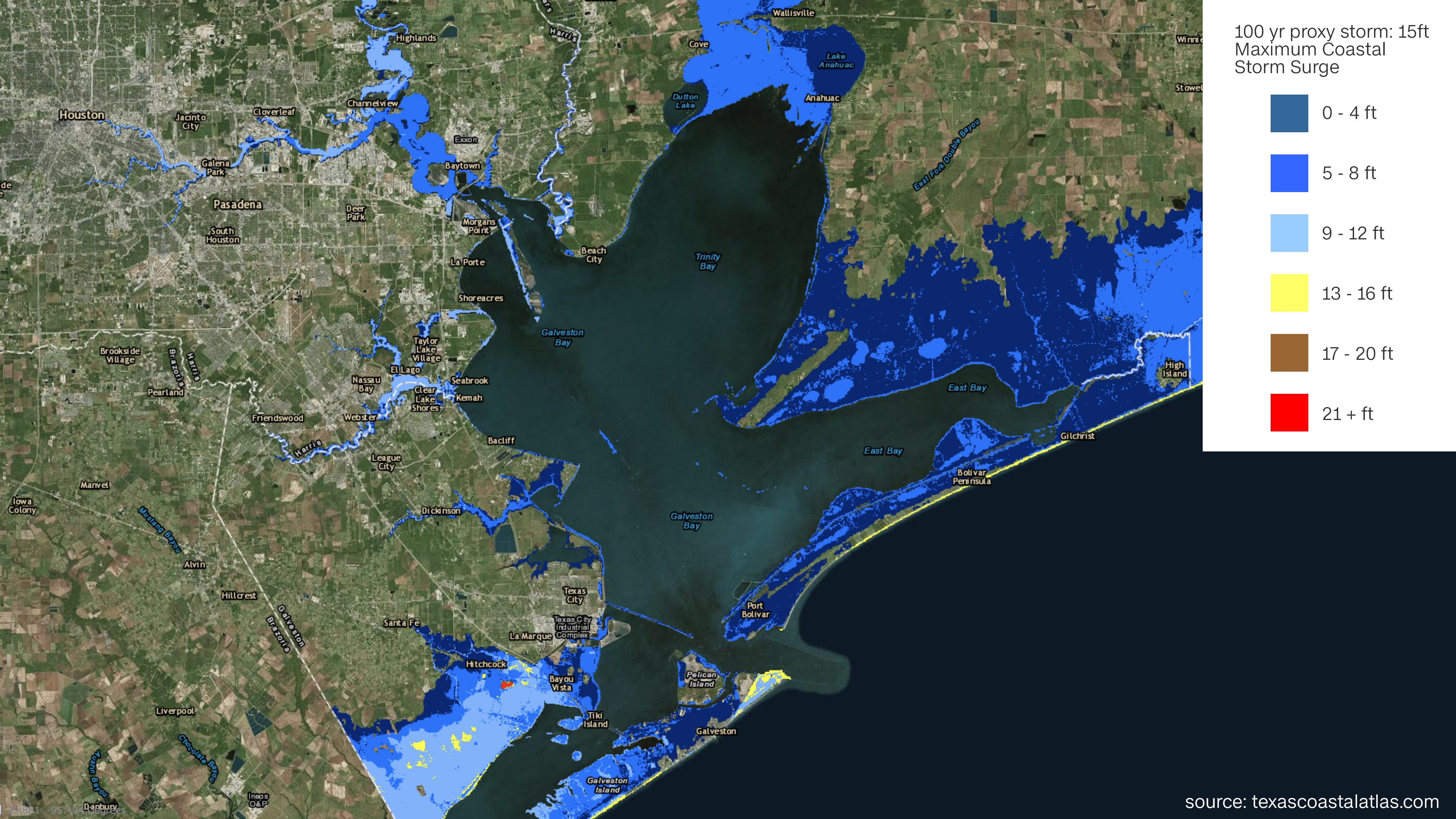 Bush’s letter states that the Houston/Galveston port systems “produce over 3 million direct and indirect jobs nationwide,” not to mention the 6 million people that live and work in the region.

“The return on investment would be significant,” Merrell said, “they spent $16 billion to protect New Orleans.”

The proposed coastal barrier system “would be built to a 100-year event standard,” according to the Texas GLO – but even that might not be enough.

“With climate change warming the oceans and creating rising sea levels, what is a 1 in a 100-year event in 2017 may be a 1 in 10-year event 30 years from now,” said CNN Meteorologist Chad Myers.

And while no man-made system can protect from the wind and the rain associated with a strong hurricane, the proposed coastal barrier could significantly reduce the storm surge, which often is the deadliest and most destructive part of the hurricane.

The Texas GLO and their academic partners have used computer models to conclude that the coastal barrier “would have prevented 87% of the damages incurred by Hurricane Ike.”

Considering the $29.5 billion price tag from Ike, which was considered a “near-miss,” building the coastal barrier could pay for itself after one significant hurricane.

“The barrier is essential,” Merrell pleaded, “its cost-effective to do it … it’s really a no-brainer.”