Parents can start talking to kids about gender at a very young age, one expert says

What happens when you bring a group of sixth-graders together to meet – for the first time – someone who is transgender? You get an easy and honest conversation that speaks volumes about how we can talk to our kids about gender and how much we can learn from their openness.

“What gender do you think I am?” Hennessy asked 11 sixth-graders in New York City who are members of SheKnows’ unique Hatch program, which focuses on teaching digital literacy and citizenship to the next generation. The program is in its fourth year. 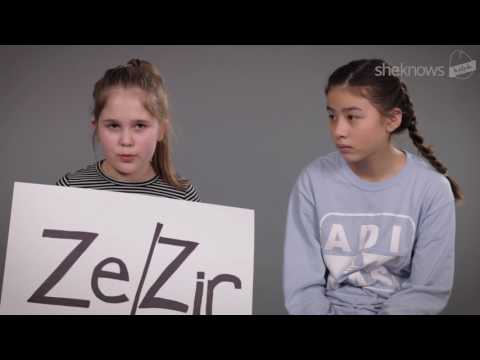 There is silence for a second, and then one girl says “male” and another says, “I heard earlier that you were transgender.”

Hennessy, an actor in New York City and co-host of the podcast “Kill Me Now” with comedian Judy Gold, says they are both right.

“I’m a transgender male,” he says.

And then the questions begin. “When did you first realize you were transgender?” a boy asks before the conversation turns to terms the kids may or may not have heard before: transgender, agender (when you don’t identify as male or female), gender fluid (you feel more masculine one day, more feminine the next) and sexual orientation.

Hennessy hopes the new video of the Hatch workshop, released Thursday, will be seen by children and parents across the country and lead to more understanding about people like himself who are born with reproductive organs that do not match their gender identity.

When your young daughter says 'I'm a boy'

He then explains to them what being transgender is. “And boom, they get it right away,” he said.

Maverick, 12, knew what transgender was before taking part in the Hatch workshop. His mom is a sexuality educator who has been talking to him about sexuality and gender since birth. But he had never met anyone who was transgender until Hennessy.

“I thought it was a very powerful experience for me,” Maverick said. “I’m not sure about other kids, but I think meeting a transgender male for the first time was a very impactful thing in my life.”

The experience gives him a better understanding of how other people think, he said. “I think it just tells me more about others and how to act with them and respect them in different ways.”

Reed, who’s also 12 and participated in the workshop, said it’s very helpful to meet and talk with someone who is transgender or watch them in a video.

Logan Levkoff is a sexuality educator who has taught and designed many of the sex education programs used in private schools throughout New York City and the surrounding areas. She is also the mother of Maverick and an 8-year-old daughter. Gender is a constant conversation in their household.

Transgender kids: Painful quest to be who they are

“We’ve always spent a lot of time talking about what it means to be a boy and what it means to be a girl and maybe more importantly, the fact that there is not one definition of boy and girl and anything in between,” said Levkoff, author of “Got Teens? The Doctor Moms’ Guide to Sexuality, Social Media and Other Adolescent Realities.”

Her advice for parents, when it comes to how and when to start talking to kids about what it means to be transgender and gender in general, is to first figure out what exactly they want their kids to know and then recognize what their own limitations are and the gaps in their own knowledge.

“The likelihood is that for a lot of parents, they may not have any personal experience, which means that you have to get some information and education and also be willing to tell your child, if they have a question for you, to say, ‘You know what, I don’t know what the answer is, but I’m going to find it out for you,’ ” said Levkoff.

Hennessy, who grew up in Maui, Hawaii, at a time when there was no dialogue about being transgender, said parents should absolutely take time to learn more about it.

“Just Google it. Google transgender. Google transsexual. Google tranny, and it won’t take that long,” he said. “Just learn a little bit. All you’ve got to do is start. You don’t have to learn everything all at once … It’s a lot simpler than people try to make it, so we have all these definitions and words to define things, but it’s really super simple. … We overthink it.”

Hennessy didn’t hear the term transgender until roughly five years ago. Before that, he always felt “off,” he said. “I felt totally born wrong since day one.” Ashamed about being in a woman’s body, he had bound his breasts ever since he started developing. “I would wear two sports bras and one of my dad’s extra-large shirts … and any time the wind blew up against me, I would pull my shirt up off of my chest.”

How parents can learn from their kids

Like Levkoff, Hennessy can’t emphasize enough how the more honest and open you are with your child about sexuality and gender, the better.

Levkoff, who also is author of “Third Base Ain’t What It Used to Be: What Your Kids are Learning About Sex Today and How to Teach Them to Become Sexually Healthy Adults,” believes there really is no such thing as what conversation is “age appropriate.” It all depends on the individual.

“There are some young kids who are really capable of some really sophisticated thought about gender and sexuality, and there are some adults who are completely incapable of having a mature conversation, so age doesn’t determine whether or not someone can handle this, but I think it’s important for parents to remember that from the time our kids are born, how we dress them, how we allow them to express themselves, how we allow other people to talk to them or the assumptions they make about them, are all little doses of education about gender and expression,” she said.

What is clear, at least from the video featuring Hennessy and the Hatch participants, is that there’s a lot parents can learn from kids, especially about topics such as gender.

“I think parents should learn from kids, because kids are more exposed to all this stuff now … and parents, their generation wasn’t as exposed,” said Reed, one of the young participants. “It shouldn’t just be kids learning from parents. It should go all ways.”

Levkoff said she is “constantly amazed” at how “color- and gender-blind” today’s kids are. “And by the way, not all of them, because they are a product of us,” she said. “But their default setting isn’t to be intolerant. Their default setting is to just be open, and that’s really an incredible thing to watch.”

Hennessy said most parents teach their kids to love equally and to eschew racism. He hopes they will also find ways to teach them to be open and accepting of another person’s gender.

“When someone is coming to you with something that is different from your experience, just give them a chance to tell their side and believe them and don’t try to change them, because by trying to change them, you’re telling them that their existence isn’t good enough,” Hennessy said.

What is the best way to talk to kids about gender? Share your thoughts with Kelly Wallace on Twitter @kellywallacetv.