Not every book is suited to be adapted to the screen, and so it might be with “American Gods.” Producer Bryan Fuller is known for his exquisite visual and unconventional narrative touches (see NBC’s “Hannibal”), but this disjointed attempt to execute Neil Gaiman’s weird, sweeping supernatural novel feels like a half-cooked meal.

Indeed, after previewing four episodes of surreal flashbacks, intriguing cameos and vague hints at the larger plot, “American Gods” has barely advanced the central storyline. While there’s some pleasure to be derived from watching a series exhibit the audacity to spoon out tidbits on its own “Twin Peaks”-like terms, the project’s appeal likely depends on one’s tolerance for near-incoherence when arresting pictures are the tradeoff.

The program’s almost-saving grace resides in the form of Ian McShane – a towering presence in HBO’s “Deadwood” – who plays the mysterious Mr. Wednesday. Both menacing and whimsical, he has a chance (or maybe not so chance) encounter with the just-paroled convict Shadow Moon (Ricky Whittle), released from prison a few days early. 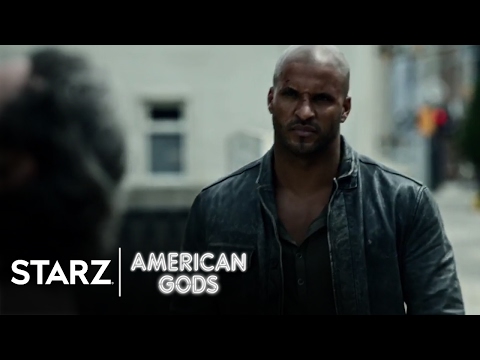 Shadow has just discovered that his wife died in an accident under upsetting circumstances. Understandably distraught, he is recruited by Wednesday to work for him, and they gradually embark on a cross-country pilgrimage that brings them into contact with an assortment of beyond-strange characters.

The premise, for those who haven’t read the book, is a collision between old gods and new, between the mythical powers rooted in our past and the new ones (Media, technology) that Americans have come to worship.

Yet despite an intriguing assortment of players – Gillian Anderson, Kristin Chenoweth, Pablo Schreiber – in smallish roles (some of whom, notably, have yet to appear four hours in), Fuller and collaborator Michael Green don’t look to be in any hurry to connect dots. Nor does it help that each episode opens with a disconnected scene – Vikings, the physical personification of death – that points to a larger end game without spelling out much of anything.

“Do you know who he really is?” Shadow is asked in regard to Wednesday – a tantalizing question at first, which becomes less enticing, despite McShane’s mischievous charisma, with each passing hour.

The result is a show filled with striking imagery – artful sprays of blood, exaggerated sexual encounters, nightmarish visions – that lacks sustained momentum. And while there’s been an outbreak of such surreal series, from “The Leftovers” to “Legion,” the net effect of “American Gods” – seemingly determined to dazzle with its eccentricity – feels like nothing quite so much as an elaborate waste of time.

Granted, Gaiman’s following and the book’s cultish nature should generate considerable curiosity, catering to the sort of passionate niche upon which a pay channel like Starz relies.

Those not immersed in the title’s ins and outs, however, should be forewarned: “American Gods” might oscillate between light and shadows, between past and present, but in terms of articulating a comprehensible story, it feels like a lot of smoke and mirrors.