Humans were in America 100,000 years earlier than we thought, study claims

Discovery at a dig site in San Diego shows there was human activity in North America 130,000 years ago

Up until now, scientists agreed the oldest record of human sites in North America was about 15,000 years ago

The remains of a mastodon discovered during a routine excavation in California shows possible human activity in North America 130,000 years ago – or about 115,000 years earlier than previously thought.

Paleontologists with the San Diego Natural History Museum discovered the remains of the elephant-like animal more than 20 years ago. But it wasn’t until now that scientists were able to accurately date the findings, and possibly rewrite the history of the New World as we know it.

“This is a whole new ball game,” Steve Holen, co-director of the Center for American Paleolithic Research and the paper’s lead author, told CNN. The discovery changes the understanding of when humans reached North America.

These are some of the Mastodon bones found at the excavation site.
San Diego Natural History Museum

The study, to be published this week in the science journal Nature, said the numerous limb bones fragments of a young male mastodon found at the site show spiral fractures, indicating they were broken while fresh.

The scientists say they found what appear to be hammerstones and stone anvils at the site, showing that ancient humans had the manual skill and knowledge to use stone tools to extract the animal’s marrow and possibly to use its bones to make tools.

The discovery took place in 1992 by museum paleontologists, who were doing routine work at a freeway expansion in San Diego County. The site was named Cerutti Mastodon site, in honor of Richard Cerutti, who made the discovery and led the excavation.

Museum paleontologist Tom Deméré, who was involved in the excavation and has also been part of this study, said the project took five months and covered almost 600 square feet. He described the decades-long project as an “incredible odyssey.”

“We early on realized that this is a special site,” said Deméré, adding later the group was “salvaging fossils as they were being found.”

Five large stones, which were used to break the bones and teeth of the mastodon, were found alongside the animal’s remains, according to the study. The site also contained fossils of other extinct animals, including dire wolf, horse, camel, mammoth and ground sloth.

Scientists specialized in various fields, from archaeology to the environment, have done research at the Cerutti site since its discovery.

Advanced radiometric dating technology allowed scientists to determine the mastodon bones belong to the Late Pleistocene period, or 130,000 years old, with a margin of error of plus or minus 9,400 years.

“The bones and several teeth show clear signs of having been deliberately broken by humans with manual dexterity and experiential knowledge,” Holen said in a press release.

Experts agreed that the earliest records of human ancestors in North America is about 15,000 years old, but the discovery of the Cerutti site “shows that human ancestors were in the New World ten times that length of time,” said paleontologist Lawrence Vescera.

“This site really nails it because the evidence is really clear.”

What the science community says

The study’s findings have been met with some skepticism.

The consensus among experts is that humans settled in North America from Asia by crossing the Bering strait about 20,000 years ago.

John McNabb, an archaeologist at the University of Southampton, UK, told Nature he questions how humans crossed the wider sea line between northeastern Siberia and Alaska 130,000 years ago.

“Until we actually find a skeleton at this site, or at the site of a comparable age in the America, it’s all open to speculation and we just don’t know,” McNabb said.

The first Americans: Clues to an ancient migration 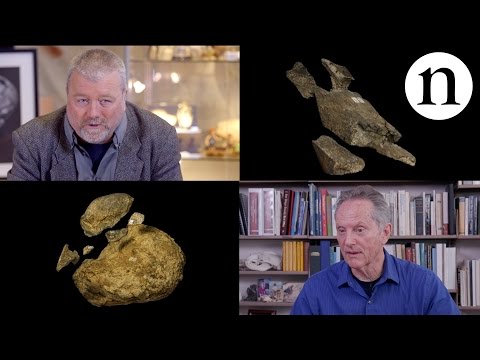 The 11 scientists involved in the study told CNN it’s too early to tell the impact of the new findings. For now they want the general audience to see it and understand it, and for their peers to study it – and even challenge it.

The archaeological treasures found at the Cerutti site will be on display at the San Diego museum. And a partnership with the University of Michigan will allow for even more people to see 3D models of some of the specimens at their Online Repository of Fossils.