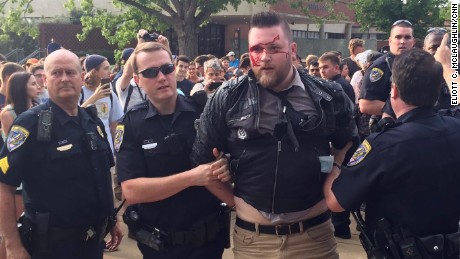 A protestor is arrested after a fight at Auburn University's Foy Hall on April 18.

(CNN)Free speech came to fisticuffs before alt-right white nationalist Richard Spencer could even begin his speech at Auburn University.

Students encircling the brawl said a Spencer supporter began jawing with an antifa, or anti-fascist, protester over Spencer's right to speak. A punch was thrown. The men spun through the crowd, swinging fists and grasping for headlocks before thudding to the ground.
It was over in seconds with both men in cuffs -- one of them bloodied -- and carted off to jail.
Auburn had tried four days earlier to cancel Spencer's speech Tuesday night. But a federal judge forced the public university to let him exercise his First Amendment rights.
Photos: A history of free speech on campus
Photos: A history of free speech on campus
College and universities have long been hubs of free speech -- and hotbeds of protest. In this 1964 photo, civil rights groups picket a speech by Alabama Gov. George Wallace at the University of Cincinnati in Cincinnati, Ohio. The controversial Wallace, a leading spokesman for segregation, denounced a newly passed civil rights bill as a federal power grab.
Hide