Evacuations resume in Syrian towns of Al-Fu'ah, Kafraya, and Zabadani

Saturday's bombing hit people who were leaving their towns

The evacuation of civilians and rebels from several besieged Syrian towns resumed on Wednesday, Syrian state media and a monitoring group reported.

The population swaps between opposition and regime-held areas had been halted after a suicide bombing ripped through a convoy of buses Saturday, killing 126 people, including 68 children, who were being evacuated as part of the same deal.

Women and children look out from a bus window.
OMAR HAJ KADOUR/AFP/Getty Images

On Wednesday morning, a convoy of buses rolled out of the pro-regime Shia villages of Al-Fu’ah and Kafraya, which have been under crippling siege for more than two years.

At least 109 of those killed in the suicide blast on Saturday were evacuees from the same government-held towns.

Syrians board a convoy of buses.
OMAR HAJ KADOUR/AFP/Getty Images

“At dawn today, at least 45 buses carrying about 3,000 people from Al-Fu’ah and Kafraya villages, in the northern and eastern suburbs of Idlib, left the two towns in the direction of the city of Aleppo, which is under the control of the [Syrian] regime,” Rami Abdul Rahman, the head of the UK-based Syrian Observatory for Human Rights, told CNN. “Among the evacuees are about 700 pro-Syrian regime fighters.”

As residents left Al-Fu’ah and Kafraya, roughly 300 people from the rebel-held town of Zabadani, near Damascus, departed for opposition-held areas, Rahman said.

An elderly man waits to board the convoy.
OMAR HAJ KADOUR/AFP/Getty Images

State-run Syrian Arab News Agency (SANA) reported that 11 buses “carrying armed men and their families” left Zabadani and the surrounding areas, without specifying the number of people that were evacuated.

Workers try to put out a fire at the site of Saturday's bombing.
Aref Watad/Anadolu Agency/Getty Images

Saturday’s attack targeted a convoy of buses carrying thousands of people, all of whom were being evacuated under a so-called Four Towns Agreement.

The deal, negotiated by rival sides in Syria’s six-year conflict, involves four towns hundreds of miles apart – Kafraya and Al-Fu’ah in the country’s north, and Zabadani and Madaya in the southwest.

No group has claimed responsibility for the bombing, which struck buses that were parked at the time.

SANA reported that the same convoy hit in the attack continued on to regime-held parts of Aleppo. 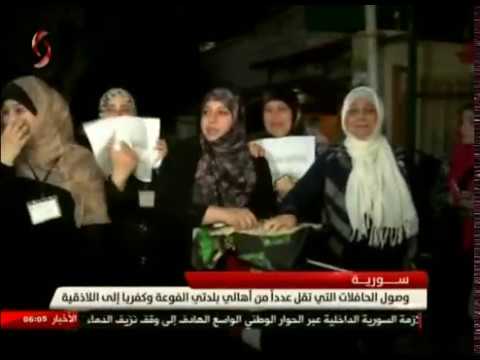 Video shown on Syria’s Al-Ikhbariya state news channel showed evacuees from regime-held Kafraya celebrating as they arrived in the coastal province of Latakia.

“We escaped from death,” a woman told Al-Ikhbariya, crying. “Is this joy, is this sadness because we left our families? I don’t know. The circumstances are very hard, but praise be to God.”