Greenland's glaciers play a role in Earth's rising sea levels, so a crack is concerning

Something caught Stef Lhermitte’s eye last week as he pored over satellite images of Northwest Greenland’s Petermann Glacier, one of the largest glaciers in Greenland.

“I saw a small line and thought ‘that seems new,’ ” said Lhermitte as he described the discovery he made, almost by accident, as he was testing a methodology to detect melt that requires making animated GIFs from the black and blue grainy images of Greenland captured by the European Space Agency’s Sentinel-1 satellite.

Lhermitte, an assistant professor at Delft University of Technology in the Netherlands, checked other satellite records and determined the crack showed up in July 2016, but to his knowledge, had not been noticed by anyone.

Greenland is responsible for about one-third of the sea-level rise the Earth is experiencing, so a new crack and potential breaking off of one its largest glaciers is concerning. 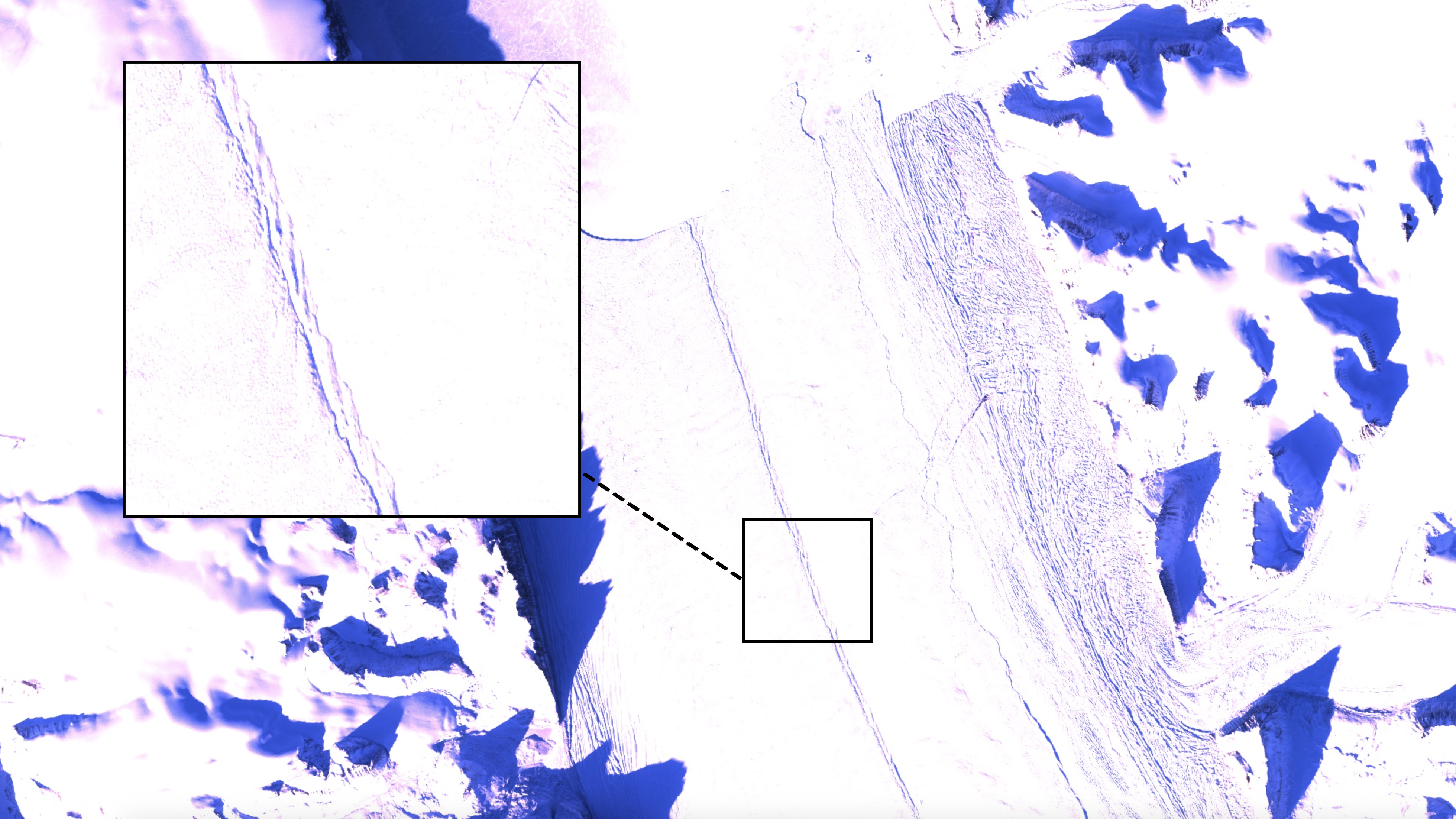 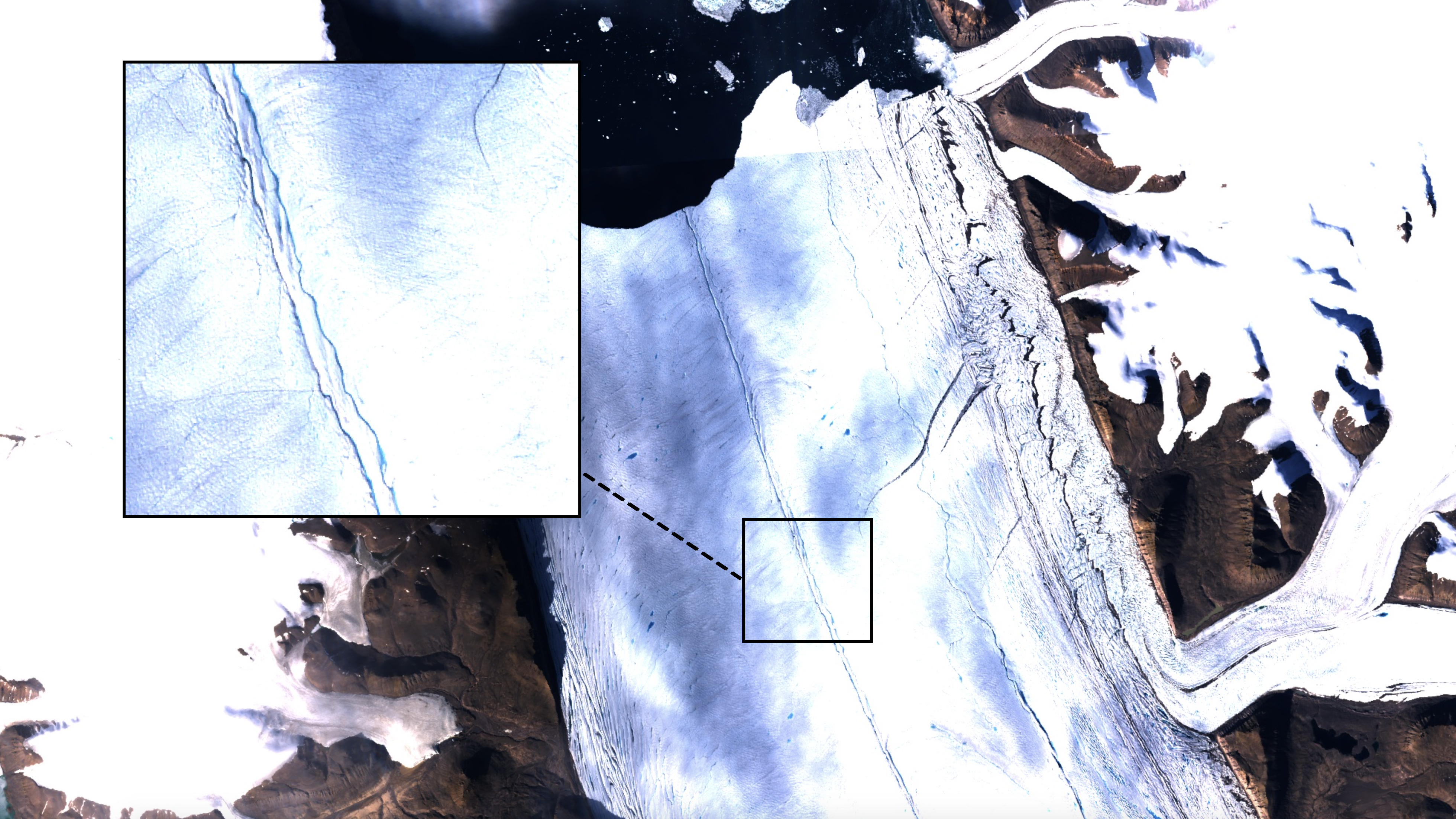 Lhermitte took his findings directly to Twitter, tweeting several images of the crack and searching for help determining its significance.

“Several of my initial tweets have question marks at the end. … I had a hypothesis but was not sure,” Lhermitte said.

Is this recent internal crack in #Petermann glacier the prelude of a new @Petermann_ice island? 1/5 pic.twitter.com/V8qKF1MwmC

His tweets caught the attention of NASA’s program scientist for the cryosphere, Tom Wagner, who directs NASA’s polar research. Wagner pointed them out to a member of his team, Joe MacGregor.

MacGregor was in Greenland leading a unique research campaign called Operation IceBridge, which makes low-level flights over Greenland and Antarctica’s ice sheets to create 3-D views of the ice with the intent of understanding its rapid changes.

MacGregor said Wagner emailed him, “asking if we had flown over this area where the crack was spotted.”

As fate would have it, Operation IceBridge had one flight left over Petermann Glacier for this year’s mission, and it was scheduled for the next day.

The crack Lhermitte found was only a few hundred meters from the planned flight path for the last flight, a flight MacGregor said was “already going to be the most important flyover of Petermann Glacier.”

“Everything came together perfectly,” MacGregor said. “Even the weather cooperated,” as sunny skies provided a crystal-clear picture of the ice surface below.

The Operation IceBridge flight confirmed the existence of the crack and scientists were able to map the area in detail using sophisticated onboard equipment.

The glacier acts as a barrier between the ice sheet and the open ocean and as the glacier retreats and large portions of ice calve off into the ocean, the less resistance these glaciers provide, which speeds up the contribution to sea-level rise from the land ice.

A closeup of the crack.
NASA/DMS/Gary Hoffmann

The new crack also indicates the potential for a large iceberg to break off the glacier. It has already happened twice this decade. In 2010 a large ice island broke off that was roughly four times the size of Manhattan, and in 2012 one broke off that was about half that size. The combination of the rift occurring farther upstream, as well as coming after the two other major calving events so quickly, “would be extremely unusual if not unprecedented,” said MacGregor.

Glacial retreat is not unique to Petermann Glacier. It is commonplace at many of Greenland’s largest and most important glaciers, which is why research in these regions is so important.

The flight over the new crack provided a glimmer of hope, however.

Kelly Brunt, a scientist aboard the flight, is an expert in ice shelf rifting. She noticed the eastern edge of the rift ran into a “medial flowline,” a river-like flow in the center of the glacier.

“Rifts can stall when they reach the softer ice, like that found in the medial flowline” MacGregor said.

Brunt commented on the Operation IceBridge Facebook page, after the flight, that the medial flowline “may exert a stagnating effect on the propagation of the new rift toward the older one.”

This could prevent the two rifts from joining to create a huge calving event, but much more research will need to be done, as well as close observations of the new rift in the glacier.

In this case, the research collaboration came together perfectly, and according to Lhermitte, it “shows how valuable both remote sensing and observations can be when researching the rapidly changing polar landscape.”