The Trump doctrine? Don’t do what Obama did

Trump is a reactive person by nature

For the third time in the last 10 days, the Trump administration sent a very clear message to the world: There’s a new gang running things in Washington now.

“The era of strategic patience is over,” Vice President Mike Pence said during a trip to the DMZ on Monday.

Pence’s muscular rhetoric comes on the heels of President Donald Trump’s decision to strike the Syrian airbase where a chemical attack was staged and to drop the “mother of all bombs” on a ISIS tunnel encampment in Afghanistan.

In all three instances, Trump and his administration are going out of their way to highlight the clear differences in their approach from that of the Obama administration.

If you voted for Trump, these are welcome changes to an American foreign policy that too often kowtowed to the world community rather than asserting American exceptionalism first, last and always.

If you voted against Trump, you see this aggressiveness – in rhetoric and action – as a deeply dangerous development from a president who is badly out of his depth when it comes to foreign policy.

No matter which side of that divide you find yourself, what’s clear is that Trump’s approach to these issues is very different than that of Obama. Which, I think, is the point.

Trump is someone of deeply flexible political views. (He was a Democrat for years before running for president.) In many ways, he defines himself and his views only in opposition to others. He is reactive by nature – in his words, a natural counter-puncher.

During the Republican primary, it was easier to say what he wasn’t – “low energy” Jeb Bush or “Lyin’” Ted Cruz” – than to say what, in his heart of hearts, he supported. “You’re not going to be able to insult your way to the presidency,” Bush famously told Trump.

Bush to Trump: You Can’t Insult Your Way to Presidency 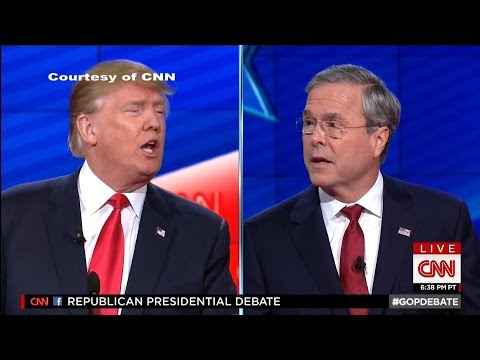 And yet, that’s exactly what Trump did. His general election race was far less about what he would do and far more about what Hillary Clinton either wouldn’t or couldn’t do. And it worked.

Now, without an obvious foe to define himself against, Trump appears to be working out his foreign policy views by asking “What would Obama do” and then doing the opposite.

That isn’t a comprehensive foreign policy, of course. But it’s only 88 days into his presidency; few presidents have a fully-formed worldview at this point in their tenure.

What makes Trump unique among is that he appears to be primarily defining what he believes in reaction to the positions staked out by Obama. If Obama was for it, Trump is against it – and vice versa.

It remains to be seen how long Trump can keep up this “anti-Obama” approach – or how well it might work. But, what we now know – and what Trump hopes the world knows, too – is that his administration will look almost nothing like the one that came before it.