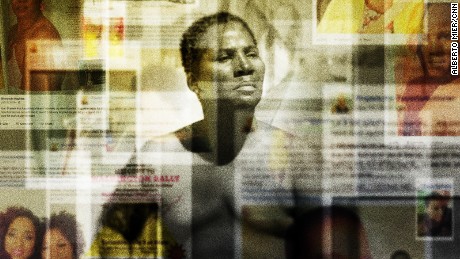 Through frequent posts on Facebook, Paulette Leaphart garnered the support of thousands of fans. But some of what she posted raised questions and worked against her.

(CNN)Behind the double-mastectomy scars that run across her bare chest, she had a story to tell.

So late last April, Paulette Leaphart embarked on a 1,000-mile walk from her childhood hometown of Biloxi, Mississippi, to the halls of Congress in Washington.
And she did it topless.
The breast cancer survivor screamed for a cure and demanded better and more affordable health care. She wanted women without breasts to believe in their beauty and be proud of their strength. By showcasing and embracing her scars, she hoped to inspire others to do the same.
Her journey was bold, visual, moving. It offered a hero to admire and, given Paulette's audacious decision to walk shirtless in the face of strangers, a rich spectacle to witness. It spoke to African-American women, who face the highest breast cancer mortality rate. It inspired legions of survivors. And it spoke to many who'd lost someone to the disease.
Read More
It seemed a storyteller's dream. But reality would eventually intrude.
Documentary filmmakers were first to seize on Paulette's potential -- after she approached a producer who was out on a shoot, lifted up her shirt and said her story needed to be told. A stunning trailer for "Scar Story," in which the film crew would follow her entire walk, was released in late October 2015.
A Kickstarter campaign to help fund the film went up weeks before the walk began, attracting enthusiastic donors. Journalists flocked to Paulette, eager to tell her story. Even megastar Beyoncé took notice and featured Paulette in "Lemonade."
I saw the trailer on Facebook and, like so many others, was hooked. In a world hungry for heroes, whose stories of inspiration bring us light amid darkness, Paulette seemed to feed that craving. After making a few calls and learning she was walking with her 8-year-old daughter, no less, I hopped in my car, picked up my amateur photographer stepson, and headed to North Carolina to walk with her.
Some stories land on a journalist's plate like manna from heaven. They're perfect morsels you can't wait to share. Others arrive a mess of ingredients with no recipe to follow. This one started the first way and finished the other.
After walking with Paulette for a full day, I left with more questions than answers. No matter how much I hated to admit it, aspects of her story simply didn't add up. And the more I kept digging, the more inconsistencies I found: about her past and her cancer treatment, about how much she was actually walking, even about her motivations.
Part of me wanted to walk away -- from Paulette and the story. If even one woman's life was saved thanks to a conversation Paulette started, wasn't that enough? So what if our hero was flawed?
But then I thought about the thousands of people following Paulette on Facebook, all the journalists who covered her journey and the online video viewed more than 20 million times.
And I realized: This story wasn't just about Paulette. It's about our need to find -- and, for some of us, become -- heroes. It's about the unchecked storytelling and self-promotion that thrives on social media. It's about the disappointment we feel when reality jolts us awake from our reverie.
In our desperation to believe in people, do we dole out passes too easily? Had we, in our collective enchantment with Paulette, all become blind?
Shameka Fulston, left, and others join Paulette Leaphart for a community walk in Charlotte. Fulston planned to rejoin Paulette for the last 100 miles of her walk but left Charlotte feeling disenchanted.

A vision from God

I caught up with Paulette at a house outside Charlotte, North Carolina, where she and her daughter were staying. The grill was fired up, food filled the counters and the music was pumping. Paulette, who wore a T-shirt emblazoned with the words "Living beautifully," greeted me with a hug.
"The walk has given me back everything the devil stole from me," she told those in the room, as they gathered to pray for her journey.
The hostess said she opened her home because she'd lost her own sister to breast cancer. As her tears fell, she told Paulette, "That's why I wanted to take care of you."
Dusk turned to night, and I kept my eye on the time. When we spoke by phone, Paulette had warned me she woke up at 4:30 each morning and walked 20 to 40 miles each day except weekends, which were for rest. She had to cover that sort of ground, she explained, if she wanted to meet her goal of reaching Washington by June 27, her 50th birthday. I'm in decent shape, but walking at least 20 miles on little sleep scared me.
"Oh, we're not starting 'til 9 a.m. tomorrow," Paulette finally told me as the night wore on. A community walk was planned in downtown Charlotte. I breathed a sigh of relief.
The next morning, the crowd was passionate but small -- about three dozen women, men and children. Many wore pink, and most had been touched by breast cancer.
"Five years in October," said one woman. "Nine years cancer-free," said another, sporting a "Fight Like a Girl" T-shirt. "Mom died in 2004," said one man, who survived lymphoma himself.
A woman who'd driven through the night to be here took off her shirt to reveal her own tangled scars. She'd seen Paulette in Atlanta and vowed to walk with her.
After photos, videos and prayers, the walkers hit the pavement, weaving their way through downtown. "We need a cure! We need a cure!" they screamed, following Paulette's lead. "Breast cancer sucks! Breast cancer sucks!" They also sang hymns.
"We will walk until we defeat this demon!" Paulette yelled.

All the pain I felt from the day I was born had purpose, and I'm living that purpose. God said I'm going to use your chest.

It was Memorial Day, one month to the day since she started, and the streets were quiet. Occasional onlookers gawked, wondering what the commotion was about. I walked along taking notes and wondered myself: How effective was this small, 1-mile march, really?
I was more interested in what would come next: the walk she was resuming with her daughter to reach Washington in less than a month.
They had already covered 710 miles. They'd walked all but 100 of them, Paulette said. She said she often used cabs to carry her through dangerous parts of the journey. With most weekends off, that would mean they'd averaged more than 27 miles a day on foot.
We got started around noon. I'd pictured us rambling through rolling hills of green. Paulette would be like Forrest Gump, I thought, gathering disciples as she strode through quaint towns.
Paulette preferred a busier route and steered us toward US 29. In her mind it was safer, and only along highways could she and her message be seen. She carried no sign, insisting the scars told her story.
To her 5,000 friends and thousands more followers on Facebook, Paulette was already a hero. They showered her with love and praise.
"If I had 10,000 thousand tongues, I couldn't thank you enough," one person wrote the day after I walked with her. "I understand your fight! God is with you every step of the way."
"I love you for what you are doing," wrote another. "You are so brave you are my WOMAN OF THE YEAR."
"You are such a phenomenal woman," wrote a third. "I lost my mother to breast cancer but I know if she were alive, she would be walking with you -- the whole way. ... God bless you."
Paulette has inspired women all over the world and said she has even saved lives. People who'd been considering s