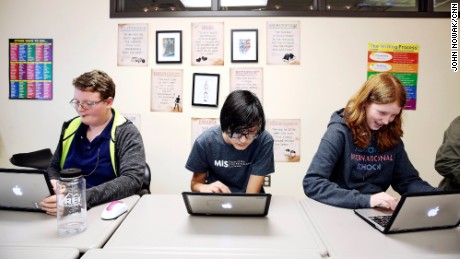 (CNN)"Jennifer Aniston did WHAT to her hair?" screams the headline.

Below the headline is a photo of the actress with a military buzz cut, along with a quote about how she'd shorn her iconic blonde locks for a role.
The online article, printed on handouts that Alexis Gerard has distributed to her class at Clemente Middle School in Germantown, Maryland, is startling. It's irresistible.
It's fake.
Students at Clemente Middle School in Germantown, Maryland, read a made-up story about actress Jennifer Aniston.
Gerard is using the story to remind the 11- and 12-year-olds they shouldn't believe everything they read online.
Read More
"There's so much fake news out there, they really don't know what's true anymore," Gerard says.
That's why educators like her around the world have launched programs to help students navigate this bewildering media landscape.
In the Czech Republic, high schools teach teens to identify propaganda from Russia.
In Sweden, students as young as 10 are schooled on how to consume news.
And in Pennsylvania, a state lawmaker wants mandatory media literacy classes in all public schools.
"The sophistication in how this false information is disguised and spread can make it very difficult for someone, particularly young people, to determine fact from fiction," says Rep. Tim Briggs.

Kids are web savvy. But that doesn't necessarily mean they're media savvy.
A survey by Common Sense Media, released earlier this month, really brought home that point.
In it, 44% of tweens and teens said they can tell the difference between fake news stories and real ones. But more than 30% admitted they shared a news story online -- only to find out later that it was wrong or inaccurate.
"There was sort of a filter on what was available to kids," says Bob Thomas, a middle school education technology specialist in Massachusetts. He's referring to the traditional gatekeepers of old media.
"And now those filters are all off. Anyone can publish (anything) on the web. In a way, it's a sad thing."

So, how do you prepare against that?
For educators, it means equipping themselves with some new weapons.
A few basic questions to consider

Who's making money off it?

Who might benefit or be harmed by this message?

What is left out of this message that might be important?

Is this credible (and what makes you think that)?

One of them is a course created by the nonprofit, the News Literacy Project that teachers from California to Virginia are adding to their classrooms. It includes a 10-question checklist for identifying fake news.
Some of the red flags are easy to spot.
Is the story missing a byline? Is the headline in ALL CAPS? Is there excessive punctuation? Are they promising you something "the media" doesn't want you to know?
Some take a little more thought.
Who published it? Is the tone a little sensational? Is the content genuinely trying to inform you, or just trying to get you to see ads?
The Media and Society class in session at Midtown International School.

Patricia Hunt, who teaches government at a high school in Arlington, Virginia, say her students were already learning how to evaluate sources academically. So doing the same for news sources was a natural next step.
"Question what you hear. Question authority," she tells them. "Question the perspective. Question the sources."