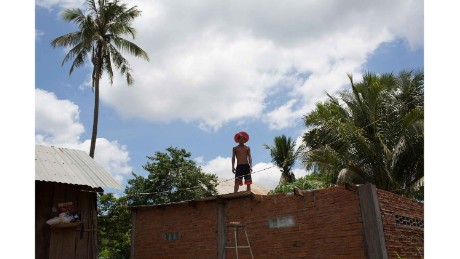 Pham Anyang, a TB patient from Srosomthmy village, completes building work on the roof his home.

Photos are courtesy of Tom Maguire, communications manager and photographer for RESULTS UK.

(CNN)The roads are bright orange and unpaved through the agricultural district of Memot in Cambodia. Along the sides lie miles of maize fields and a few farmers tending to them.

Some of these men reside in the small village of Srosomthmy -- one of many tiny hamlets located within the district.
As they nurture their crops, most of their wives are attending an important meeting at the village's central gathering point to hear about an issue affecting not just them, but the whole country: tuberculosis.
The road leading to Srosomthmy village, in Mamot district, Cambodia.
TB is now the leading cause of death by an infectious disease, globally, and Cambodia has among the highest rates in the world, with 380 people estimated to be infected per 100,000 in the population in 2015.
It's a small country, with a population of just more than 15 million. Total numbers infected appear low when compared globally, particularly against countries such as India, which had almost 2.85 million new infections in 2015, compared to Cambodia's 59,000.
Read More
But when it comes to TB, the rate of infection is somewhat more important, as this shows a greater concentration and, given the airborne nature of the disease, greater opportunity for infection.
This, along with the signs and symptoms of the disease and how best to seek treatment, is what the women of Srosomthmy are learning about during an educational workshop run by local NGO, RHAC.
Women participate in a TB awareness and education session in Srosomthmy village.
"Someone will be coughing for months ... and people will say he's an old man and it's part of being old," said Dr. Jamie Tonsing, South-East Asia Regional Director for the International Union Against Tuberculosis and Lung Disease, who believes greater awareness about TB is needed to ensure people get treatment and prevent infecting others.
Sam Mowum, 71, takes a nap inside his home in Proy village in Mamot district, Cambodia. To avoid infecting his family, Sam Moeum left the family home to complete his treatment and now lives alone.
Coughing is one of many symptoms of tuberculosis, and how the disease spreads -- through airborne droplets carrying the infectious bacteria -- and people often wait until symptoms become severe before seeking any form of diagnosis or treatment, according to Tonsing. Other symptoms include night sweats and weight loss.
Seeking treatment is "low on the priority list," said Tonsing.
Decades of civil unrest and economic hardship have left Cambodia, its people, and its health care infrastructure, in need of recovery.
"The whole health care system was non-existent after the civil war," said Tonsing, adding that the country had lost the majority of its doctors and nurses. According to the World Health Organization (WHO), fewer than 50 doctors remained in the early 1990s, after a prior total of around 600.
With low resources, not only the elderly were left coughing -- Cambodia has a relatively young population, with a median age of 25 years old.
Pham Anyang, 28, stops for a portrait outside his home in Srosomthmy village, in Mamot district, Cambodia. He is completing his TB treatment at home with the support of RHAC, a local NGO.
WHO surveys in 2002 showed TB infection rates as high as 1,500 infections per 100,000 people, almost five times their current rates.
But since the end of the civil war more than 15 years ago, great efforts have been made to get the country back on track, with marked progress in terms of TB control.
Significant coordination between global donors and organizations, including WHO and the Japan International Cooperation Agency, and the Cambodian government led to the formation of the National Center for Tuberculosis and Leprosy Control under the Ministry of Health.
A community health worker delivers sputum samples to CENAT hospital in Phnom Penh, Cambodia.
This, in turn, transformed health care provisions, including training of local health care workers and nurses and localizing -- or decentralizing -- care so people could get treated at their local clinic, instead of a hospital 10s or 100s of miles away.
The distance means many are unable to get care with their family by their side; someone needs to stay home and look after the kids, or earn an income.