“Alien” established outer space as the ultimate “nowhere to run” haunted house 40 years ago, and “Gravity” more recently highlighted its still-harrowing if more mundane aspects. “Life” rather economically mashes up the two, producing a taut, suspenseful thriller that’s more enjoyable the less you think about it.

While it’s unwise to read too much into such matters, “Life’s” timing can’t be viewed in a vacuum. Not only is another edition in the “Alien” franchise due later this year, but it also follows “Arrival,” which proffered a more benevolent view of undulating extraterrestrials. There’s an obvious underlying science-fiction metaphor in probing the relationship between humans and mysterious others they don’t understand, one which tinges the movie’s escapism with a vague sense of dread.

The premise and structure are simple enough: A crew of six astronauts must bring home samples from Mars, which contain microscopic organisms that provide the first “incontrovertible proof” that, to use another familiar space-related tag line, we are not alone. Their task includes experimenting on the microbes in space, seeking to expose any dangers, sensibly, before setting them loose on Earth. 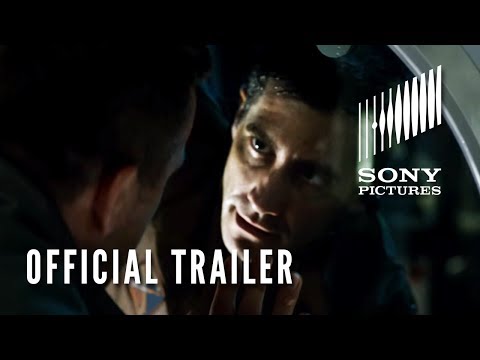 Of course, if everything went swimmingly, Sony wouldn’t have bankrolled a movie. So the tiny creature quickly grows into a larger, ominous and eventually murderous one, creating what amounts to a claustrophobic war of attrition for the international crew, who – cut off from contact with mission control– join the lengthy cinematic ranks of brilliant scientists that occasionally do really dumb things.

Jake Gyllenhaal and a wisecracking Ryan Reynolds provide the cast its marquee value, but as constructed, “Life” is a pretty egalitarian exercise. Rebecca Ferguson, Olga Dihovichnaya, Hiroyuki Sanada and Ariyon Bakare round out the company, whose relationships are at best marginally developed.

Swedish director Daniel Espinosa delivers several jump-out-at-you moments and a few surprises, although the alien (nicknamed “Calvin”) is perhaps scariest in the earliest stages, when it first begins to exhibit movement and purpose.

In many respects, “Life” feels like a throwback to the 1950s, the sort of movie where, at that time, the grown-up monster would have been a guy in a suit brandishing rubbery limbs, and audiences would have been encouraged to scream their heads off. Give the movie credit, in that regard, for at least trying to play with expectations, a formidable challenge in such a well-trodden genre.

“We were better off alone,” the movie’s ad campaign says, in a nod to vintage slogans of the past.

Those who bet on “Life” probably won’t feel conspicuously better off for having seen it, but on the “see it/skip it/rent it” scale, they’ll probably savor the experience more in the darkened company of others.