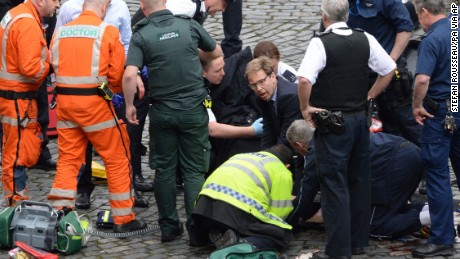 Conservative Member of Parliament Tobias Ellwood, centre, helps emergency services attend to an injured person outside the Houses of Parliament, London, Wednesday, March 22, 2017. London police say they are treating a gun and knife incident at Britain's Parliament "as a terrorist incident until we know otherwise." The Metropolitan Police says in a statement that the incident is ongoing. It is urging people to stay away from the area. Officials say a man with a knife attacked a police officer at Parliament and was shot by officers. Nearby, witnesses say a vehicle struck several people on the Westminster Bridge. (Stefan Rousseau/PA via AP).

(CNN)There was an unexpected face among the first responders to Wednesday's attack near the House of Parliament in London. Tobias Ellwood, a Conservative Member of Parliament, was seen tending to a man lying outside of Westminster Palace.

Surrounded by a throng of police officers and emergency personnel, Ellwood was seen crouching on the cobblestone street applying pressure to the bare, bloodied torso of the victim. The man the politician was trying to save was a police officer who died, a witness on the scene told CNN. The witness asked not to be named, citing details that are now under police investigation.
Authorities identified the deceased officer as Keith Palmer, 48, a 15-year veteran.
Press Association photojournalist Stefan Rousseau captured the moment.
A few yards away, another person was also receiving medical attention as law enforcement enveloped the premises. Armed police were called in to assist in the situation, which is being described by the British government as a "terrorist incident until we know otherwise."
Read More
Before his political career, Ellwood served in the British Army for five years, leaving with the rank of captain.
At the scene, Ellwood's face was smeared with blood. Sadly, this is not the first time such an attack has marked his life. Ellwood's brother Jon died in the 2002 bombings in Bali.
Wednesday's incident began when a car was driven over Westminster Bridge, hitting and injuring a number of members of the public and three police officers.
Full coverage
The car then crashed near the parliament building and at least one man, armed with a knife, continued the attack by trying to enter parliament, authorities said. Three people were killed, including the police officer. At least 20 people were injured.
The man believed to be the attacker was fatally shot by police.
The emotion of those at the scene was palpable, even as details about casualties and the nature of the attack continued to roll in.
Ellwood's fellow MPs applauded his bravery, calling him "an absolute hero."
"Huge respect...for his heroic efforts today," tweeted Maria Caulfield.
"I'm grateful to the police and proud of Tobias Ellwood," tweeted Tom Tugendhat. "A good man helping another."
This story has been updated to reflect the latest number of fatalities from London Metropolitan Police.