Jackson appeared on "The Tonight Show"

She's modeling and acting and has dabbled in songwriting

Paris Jackson is stepping out from the shadow of her famous father.

The 18-year-old daughter of the late Michael Jackson appeared on “The Tonight Show Starring Jimmy Fallon” on Monday and talked about everything from show business to how Zac Efron once broke her heart.

Jackson is modeling, has dabbled with songwriting and recently made her acting debut on the Fox drama “Star.” But she told Fallon she was not certain to become a performer like her father.

“I originally wanted to be an astronaut when I was a kid,” she said. “Then I had this huge fear of black holes because my brother learned a bunch of stuff about it, and he’s like, ‘Oh, yeah, if you go into one you’re never coming back.’”

She settled on acting, which she said has always been fun for her.

Despite her pedigree, Jackson is not above feeling starstruck – as she said she was with Fallon when they met at the Golden Globes this year. But rocker Alice Cooper was the first star she fangirled over.

“I was telling him, ‘I love you so much, like I always listened to you, I grew up loving you,’” Jackson said. “Like, I was close to tears.”

Paris Jackson Got Starstruck When She Met Fave Alice Cooper 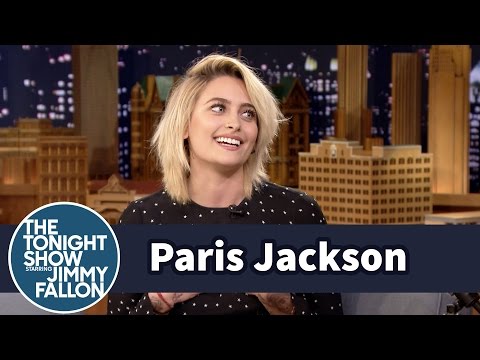 The first concert she ever really wanted to see was “High School Musical Live.” But it wasn’t what she hoped: Zac Efron was off filming a movie and missed the tour.

“That was like the most depressing part about it: He wasn’t there,” Jackson said. “I was like this heartbroken 10-year-old.”