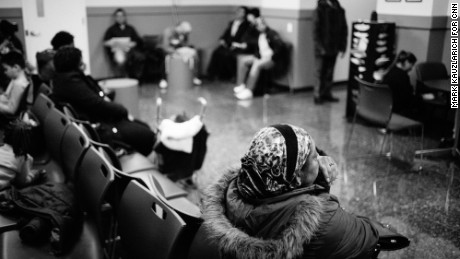 People sit in the waiting room at Catholic Charities during walk-in hours for immigration-related legal services in New York.

Scared and planning for the worst: Immigrants brace for deportation

By Masuma Ahuja, CNN
Photographs by Mark Kauzlarich for CNN

New York (CNN)Ninety-seven people are at Catholic Charities this morning. It feels like a hospital waiting room.

The sense of anticipation is palpable: Every time a charity worker comes to the front of the room with a clipboard, everyone looks up, waiting for their names to be called. For their questions to be answered.
What happens if ICE is knocking at your door?
What kind of ID should I have?
What about my children if I get deported?
Read More
Are there forms we can fill out to sign off guardianship of our children?
Catholic Charities staff speak with immigrants waiting to talk to lawyers.
In past weeks, as news of ICE raids and deportations has spread, lawyers and charities have been telling immigrants, both documented and undocumented, how to prepare.
How to make space for fear in their lives so they are not consumed by it.
In Lower Manhattan, people begin queuing at the crack of dawn every Thursday in a Financial District high-rise to get help with their fears.
People fill out forms as they wait their turn.
Thirteen floors up, Catholic Charities hosts what it calls "immigration intake sessions" where people can get advice on how to apply for asylum or a green card, what to do if ICE officers knock on their doors or what rights they have as undocumented immigrants.
Don't be afraid, these lawyers advise, but be ready.
"It's important not to be so scared that you're afraid to leave your house, send your kids to school, or go to the hospital if you need to," says Raluca Oncioiu, director of immigration legal services at Catholic Charities. But if someone knocks on your door, the first question is: Do you have a search warrant?
The rumors aren't true, the lawyers reassure: There are no ICE agents waiting on subway platforms. But also, always wear a seat belt, don't speed, don't drive with a broken taillight.
And don't be afraid to go to the police if you're a victim of a crime. It won't just protect you from the crime, but it'll help safeguard anyone else who could be a victim of the same crime, the lawyers explain.
Maribelle fears deportation, but she also wants to help her children.
Maribelle is an undocumented immigrant, a DREAMer, from Mexico. She came to Catholic Charities because her youngest child, who's 9, receives speech therapy in school, and Maribelle wants to find out about getting him more services despite her immigration status. Like the other people we spoke to here, she was comfortable giving only her first name.
Maribelle is also worried about getting deported. She came to the United States in 1989 when she was 5. She hasn't been to Mexico since, and she doesn't even speak Spanish.
Maribelle shows a photo of her family.
"My two youngest kids -- well, the middle one, she's 12, she's really scared. Really scared," Maribelle says.
"I told my daughter to have faith, that we're together and whatever happens, we'll be together."
Maribelle says she prays. There are millions of people like her here, so she hopes she won't be deported. She also hopes that in three years, when her oldest son turns 21, he will be able to help her obtain legal status.
Olga wants to apply for asylum in the United States.
Olga is from Venezuela. She's in the United States legally, but her visa expires soon and she's here to find out how to apply for asylum -- to escape the political and economic instability in her country.
Her daughter, Maria, is a college student in New York and speaks English, so she accompanied her mother to Catholic Charities.
"They said we need proof," Maria says, explaining the asylum process. But, she adds, it's impossible to prove the risks her mother faces in her home country.
"A person who tells you to your face, 'I'm going to hurt you,' we cannot have proof of that. We have no proof that she's scared."
Maria would also prefer to remain in the United States after college. She says she's going to look for jobs here after she graduates but worries it might be hard to stay.
"It's difficult to think that we're going to have to go back to our country," Maria says. "We don't want to go back."
If things don't work out here, maybe they'll go to Canada. Her brother lives there, and Maria says she hears it's easier there.
Albertina is an undocumented immigrant from Guatemala.
Albertina is here to make a plan, to be prepared for the worst. She is undocumented and wants to fight if she is detained or deported. She is so afraid that she doesn't want her face to be photographed.
She came to the United States from Guatemala seven years ago, leaving her four children behind. Like others, she wanted to escape poverty and violence, to fight for a better life for her children.
Now, two of them -- 14 and 17 -- have joined her. They are also undocumented. The other two -- 12 and 19 -- remain in Guatemala. Albertina's wages from babysitting help her pay rent for homes here and for her children in Guatemala.
If anything happens to her, she doesn't want her children here to have to return to Guatemala.
Has she thought about who will be their guardians in case she is deported?
No, she responds quickly. There is n