One of Michelle Obama’s signature accomplishments as first lady may be in jeopardy under the Trump administration.

A key lobbying group, the School Nutrition Association, released recommendations earlier this month to scale back federal nutrition standards she championed and were set under the Obama administration. The group is a national nonprofit professional organization representing over 57,000 members in the school food service industry, per its website.

The organization called for “practical flexibility under federal nutrition standards to prepare healthy, appealing meals,” specifically recommending that the US Department of Agriculture allow saltier foods that would have otherwise been allowed and cutting current whole grain requirements in half.

The School Nutrition Association’s recommendations would roll back key provisions of the “Healthy, Hunger-Free Kids Act,” legislation spearheaded by Obama, and her “Let’s Move!” campaign.

The 2010 law, implemented in cafeterias across the country at the beginning of the 2012-13 school year, was aimed at improving nutrition and reducing child obesity and authorizing funding for federal lunch programs. It called for more whole grains, fruits, vegetables, low-fat milk products and less sodium and fat. It also awards additional funding to schools that meet the standards – to the tune of six cents per healthy lunch.

“The talented people who cook the food at your school will be offering you all kinds of healthy, delicious new choices. Foods that are good for you and taste good, too,” then-first lady Michelle Obama said in a “back-to-school” message at the time. “It’s about ensuring that all of you have everything you need to learn and grow and succeed in school and in life.”

First Lady Kicks Off Back to School 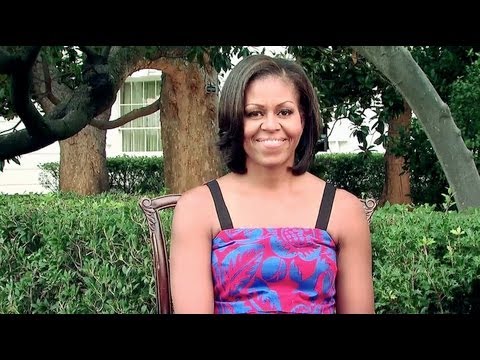 Some research has shown the Obama-era law has improved nutrition.

Researchers in 2016 study of a Washington state school district found that the program resulted in increases in the levels of six nutrients in the schools’ meals, and found that school meal participation did not change when the law when into effect.

In 2014, students posted viral photos of their unappetizing school lunches with the sarcastic #ThanksMichelleObama hashtag.

This is my lunch. I'm in high school. #ThanksMichelleObama pic.twitter.com/02t4MScBIe

“If Heidi’s first lady, french fries are coming back to the lunchroom. Call me crazy, but I thought cardboard was supposed to be in the tray and not in the food,” Cruz would say during primary appearances.

“Using the government to mandate her point of view on what people should be eating everyday is none of her business,” he said.

With a Republican administration in the White House (and a President who is known to enjoy fast food), the School Nutrition Administration hopes to earn the support to scale back the regulations.

The North Carolina congressman compiled a list of over 300 rules, regulations and executive orders the new administration should consider rolling back in its first 100 days, including the Healthy, Hunger-Free Kids Act.

“The federal government involving itself in what is served in school lunches is the epitome of government overreach,” Meadows told the Washington Examiner, calling the federal lunch program standards “overly burdensome.”

“Districts that have chosen to opt out have been able to provide more options to students and better-quality services … It’s the perfect example of how government interference generally makes a small problem far worse.”