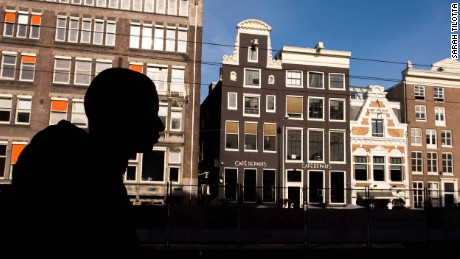 Amadu Jalloh, 24, from Freetown, Sierra Leone, walks the streets of central Amsterdam as an asylum-seeker in May 2015.

Worse than Wilders? Why refugees in the Netherlands fear the status quo

Amsterdam, the Netherlands (CNN)Khalid Jone is -- in theory -- one of the lucky ones. He fled bloodshed in Sudan after his family was killed in bomb attacks, and made it to safety in the Netherlands.

"You're not looking for work, or to start a new life. You're just saying, 'I want to save myself,'" he says, remembering his desperation.
But instead Jone found himself trapped in limbo. He is one of hundreds of refugees whose requests for asylum have been rejected by Dutch authorities; unable to return home, they are also blocked from work or study.
"The biggest mistake I made in my life was to demand asylum in the Netherlands," he says.
Khalid Jone, photographed in February 2017, at the We Are Here group's Reigersbos location in Amsterdam.
As the Dutch prepare to vote in a general election where the far-right, anti-immigrant politician Geert Wilders and his Party for Freedom (PVV) are expected to poll strongly, Jone says he fears the status quo more than a Wilders win.
Read More
"I'm not afraid of Wilders, I'm afraid of those who are running the system now," he says.
"If Wilders becomes [Prime Minister], I don't know how he's going to run his government. But I know these people, I was with them already for 16 years — 16 years I've been fighting, just for little rights."
What you need to know about the Dutch election
Jone is part of a collective called We Are Here (WAH), founded in 2012 after a number of asylum seekers had their applications rejected simultaneously. With nowhere to go they squat in unoccupied buildings in Amsterdam -- partly for shelter, and partly to make themselves noticed.
An asylum-seeker sleeps on a makeshift bed at a building squatted by We Are Here members in Amsterdam, in May 2015.
The group's over 200 members come largely from war-torn African and Middle-Eastern countries, and are stuck in what human rights groups say is an "asylum gap," legally barred from integrating into Dutch life via jobs or training courses.
"If you want to be active to fight for your rights, first you need shelter over your head," says Jone. "When you have a place to sleep, you can relax and ... it can help you think about what you want to do."
Over the past four and half years the group has taken over approximately 30 empty buildings across the city for varying intervals, staying until they are evicted, and then moving on to the next site.
A refugee passes drying laundry at the group's Vluchttoren location in 2015. Many of the buildings squatted are given a name beginning with "vlucht" meaning "flight," a moniker for refugees in Dutch.
Jelle Klaas, a prominent Dutch human rights lawyer, says the Netherlands generally has a good track record on human rights issues, but that the current government has been criticized by the UN's Committee on the Elimination of Racial Discrimination, which voiced its concern over an "increase in hostility towards refugees and asylum-seekers" in the country.
Human Rights Watch has also raised "serious concerns" over the Netherlands' "extensive use of detention for migrants and asylum-seekers, lack of safeguards in the asylum appeals procedure, and the lack of support for rejected asylum seekers who cannot be returned to their countries of origin."
"I think it's the most important problem that the Netherlands is facing," says Klaas, who says the government is working with "the fiction" that asylum seekers can leave "even though they know that's not true."
Top lawyer to high school dropout: Meet the would-be MPs
Group leaders and volunteers prepare signs for a demonstration on the eve an eviction in May 2015.
A spokeswoman for the Netherlands' Immigration and Naturalization Department, Yvonne Wiggers, told CNN that when an asylum seeker's application is rejected "they go back home."
Wiggers says cases are reviewed individually, but if the system determines that asylum is not an option, then "the conclusion is that they need to leave Holland and go back to their own country."
For asylum seekers in WAH who have been rejected, she said the options are limited: "That's not to say they don't get any shelter, because of course there are citizens in Holland and churches and all kinds of people who help these people, but from a government side, they can't claim shelter anymore."
The decision about whether to provide shelter to asylum seekers whose claims have been rejected is largely up to local municipalities, and varies widely in practice.