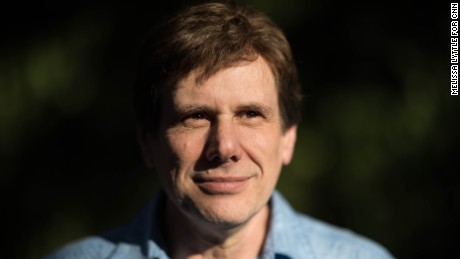 David Mikkelson started Snopes in 1994 as a way to debunk urban legends and Internet myths. It's now busier than ever.

Where fake news goes to die

Calabasas, California (CNN)The command center in the war against fake news isn't in some network's conference room or tech startup's offices. It's in a large ranch home nestled in the foothills of the Santa Monica Mountains, just north of Los Angeles.

It's here, in a long, wood-paneled room, that David Mikkelson works to keep the Internet safe from urban legends, falsehoods and lies with his myth-busting website, Snopes.com.
5 fake stories that just won't go away
On this particular day, the day after President Trump's big speech to Congress, Mikkelson and his staff are checking out a claim from social media that some prominent Democrats refused to stand and applaud when Trump honored a Navy SEAL's widow during his address.
"It's not true," Mikkelson chuckles to himself, while doing research on the computer at his desk. And he's right. Snopes determined, by examining video coverage of the speech, that the pictures used in social media posts -- of Democrats sitting and not clapping -- were from an earlier part of Trump's speech and not from when the president honored the widow. Mikkelson rated the claim "false."
It's what Mikkelson, the co-owner and co-founder of Snopes, has been doing for more than two decades.
Read More
Name a meme or myth that sounds shady, and he and his team have probably busted it.
That time Donald Trump said Republicans are "the dumbest group of voters?" There's no proof he ever said it.
Fearful that Facebook is going to start charging? For the umpteenth time, no it's not.
Saw proof that Bigfoot is real? Nope, that was just another elaborate hoax.
Snopes is the first place a lot of people go when they're not quite sure about what they've seen online. But Mikkelson and others who run the site have aspirations to be more than just a debunker of fake news.
They want it to be a place where people come for real news, too.
Snopes is the name of a family of characters who appear in novels by William Faulkner. Mikkelson's Calabasas home contains a series of Faulkner Snopes books.

Mikkelson started Snopes -- named after a family of characters in William Faulkner novels -- more than 20 years ago with his now ex-wife. Back then, in 1994, he wasn't trying to launch a debunker of myths. He was just playing around with this shiny new thing called the Internet.
"I worked for a large computer company, so I was on the Internet before most people knew there was an Internet," Mikkelson told CNN from his home office in Calabasas.
Here's how to outsmart fake news in your Facebook feed
On one of the Internet's earliest discussion boards, Mikkelson started out writing about the biggest urban legends surrounding all things Disney.
"I started with stuff about (Walt) Disney -- like, is he really frozen?" he said. (No, he is not.) Next came the rumors about salacious things supposedly hidden in Disney movies.
Then he turned his attention to urban legends and myths of all kinds. This was all before social media, YouTube or even search engines. But word got around and people started seeking out Mikkelson's site.

We were kind of like the only site out there that was tracking and writing about all the 9/11 rumors and conspiracy theories that were on the Internet.

"People on the Internet who knew about it just started making it the go-to place for anything they came across that was questionable," Mikkelson said. "They wanted to know if something was true (and) they'd start sending stuff to us."
In those early days people often wanted to know about things like computer virus warnings and missing children reports, almost all of which were hoaxes.
And Mikkelson was content with his little hobby.
"I had no journalistic pretensions," he said. "I had no idea of running a business or making money or employing other people or anything like that."
That all changed one day after a trip to the mailbox. Mikkelson had put a few banner ads on the site to help defray the costs associated with it. Then he got a check in the mail for $16.
"I was looking at it and wondering, 'who sent me $16?' Finally I realized it was the advertising from the site. I was so excited," he said. "I got paid this just purely as the product of my own creativity and effort and not working for anyone else."
Snopes has grown to a team of 12 editorial employees scattered across the country.
And as traffic to his site grew, so did the checks. They grew from a couple of hundred dollars a month to a couple of thousand to almost what he was making at his day job at the computer company. He began thinking he could make a living running Snopes as a full-time business. But when the dot-com bubble burst in 2000, Mikkelson decided it probably wasn't the best time to strike it rich in the wilds of the Internet.
But then came September 11, 2001, and all of the associated conspiracy theories and rumors that sprang up after the terrorist attacks.
Traffic to Snopes soared.
Why fake news stories thrive online
"We were kind of like the only site out there that was tracking and writing about all the 9/11 rumors and conspiracy theories that were on the Internet," he said. "The traditional news media weren't doing that."
But the media did start noticing the work Snopes was doing with 9/11 conspiracy stories, and they began contacting Mikkelson.
"We were the ones that CNN and '20/20' and ABC News called on" when they wanted to do feature stories on that topic, he said. Snopes traffic soared again.
In 2002 Mikkelson was laid off from the computer company and got about a year's worth of severance pay. He thought he'd have no better opportunity to make Snopes a full-time gig.

Today, Snopes has grown from essentially a one-man band to a team of 12 editorial employees (including four staff writers and two contract writers) and a handful of operations staff to handle the technical and business side of things.
"We exist as a small scrappy team with a unique set of skills," said Vinny Green, Snopes' director of business development and, through a San Diego company called Proper Media, one of its co-owners. " We try to make the biggest impact that we can."
<img class="media__image media__image--responsive" alt="Snopes managing editor Brooke Binkowski, left, and Vinny Green, director of business development." data-src-mini="//cdn.cnn.com/cnnnext/dam/assets/170307152529-01-snopes-small-169.jpg" data-src-xsmall="//cdn.cnn.com/cnnnext/dam/assets/170307152529-01-snopes-medium-plus