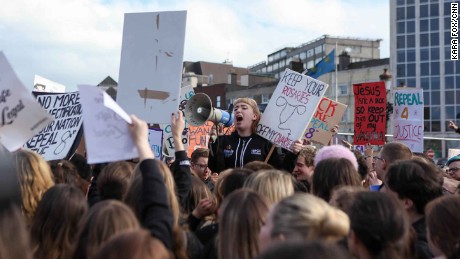 Women and abortion rights activists protest in Dublin on Wednesday.

Dublin, Ireland (CNN)As women around the world wore red in solidarity with International Women's Day, crowds in Ireland donned black and went on strike to protest against the country's restrictive abortion laws.

Traffic ground to a halt in parts of Dublin Wednesday as women and abortion rights activists sang along to Cyndi Lauper's "Girls Just Want to Have Fun" and the Spice Girls' "Wannabe" during a raucous dance party on O'Connell Bridge.
After sundown, a second, separate demonstration -- also in protest against Ireland's abortion laws -- commenced, with Irish police estimating 10,000 to 12,000 people on the capital's streets.
Demonstrators beat drums, pots and pans.
Earlier in the day, demonstrators banged pots and pans and chanted "Same struggle same fight, women's rights are workers rights." Others carried signs saying "Get your rosaries off our ovaries" and "Yes I took a holiday for this, I'm that annoyed" as they marched through the streets of the Irish capital.
People across the country walked out of their offices and joined a day of action dubbed "Strike 4 Repeal," urging the government to hold a constitutional referendum to scrap Ireland's eighth amendment -- a measure that places the right to life of an unborn child on equal footing with the right to life of the mother.
Women and abortion rights activists march in Dublin Wednesday.
Read More
The amendment, passed in 1983, prohibits abortion even in cases of rape, incest, or ill health of the mother, allowing it to be considered only when a woman's life is in immediate danger. There has never been a referendum put forward to repeal the amendment since it was instated.
At least nine Irish women on average traveled to England and Wales each day for abortions in 2015, according to UK government statistics.
While Ireland has voted before on the question of whether abortions should be legal, the restrictions remain in place. But a landmark ruling last June by the UN's human rights committee called on the government to reform the laws.
Signs reading "Silence is violence" and "Repeal" in the crowd.
A Citizen's Assembly -- which heard harrowing testimony from Irish women-- will make non-binding recommendations to the government in April.
For now, the government has not yet decided whether to call another referendum.
Here are some of the voices from Wednesday's strike in Dublin.

Alice Maher, 60, from Tipperary, with her god children.
Alice Maher, a 60-year-old artist from Tipperary, pictured here flanked by her godchildren, is part of an artist group that has been campaigning to change Ireland's abortion laws for more than a year.
"This state gives us no agency over our bodies," Maher said. "It has been 33 years since the 1983 decision. Will it be another before this changes? I'd like to see this before I die."