How would missile defense systems work against North Korea?

If North Korea fires a missile at a US target or ally, there are a number of defense systems that could shoot it down.

The Patriot and Aegis systems are already deployed in the Pacific region.

THAAD, the Terminal High Altitude Area Defense system, can shoot down short- and medium-range ballistic missiles in the latter stages of their flight as they plunge toward their targets.

But its presence in South Korea might be just as important for its sophisticated radar – the AN/TPY-2 X-Band radar – which could provide the first warning of any missile launched from North Korea.

THAAD Deploys to Republic of Korea 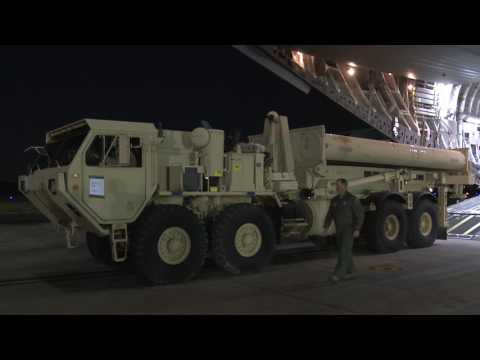 The missiles that North Korea fired Monday were thought to be of longer range, designed for targets beyond South Korea. That would put THAAD interceptors out of range.

But by being closer to North Korea, THAAD’s radar could provide critical early tracking data to missile interception systems farther afield, such as those protecting Japan or US bases in Guam, according to data from the Pentagon’s Missile Defense Agency.

Those other protection systems, including the Aegis and Patriot missile defense systems, are linked to THAAD by the US military’s Command and Control, Battle Management and Communications system, known as C2BMC, according to contractor Lockheed Martin.

Could it have detected the most recent missiles?

The THAAD battery’s radar in South Korea would have detected the launch of the North Korean missiles launched on Monday. Determining the missiles were not targeting South Korea, the THAAD battery would send radar tracking data to US Navy warships equipped with the Aegis missile defense system sailing between South Korea and Japan.

The Aegis ships would combine data from THAAD’s radar with information from their own AN/SPY-1 radar to track and fire interceptors at the enemy missiles midflight, US military documents show.

If Aegis interceptors were unable to make the intercept, data from both the Aegis radar and the THAAD radar could be transmitted via the C2BMC system to Patriot missile batteries, which are stationed closer to the enemy’s intended targets and would attempt to take out missiles as they are plunging toward those targets, according to the Missile Defense Agency.

Could a North Korean missile still hit its target?

The ballistic missile protection systems are not foolproof.

Though Aegis is touted as being able to track more than 100 targets at one time, and has passed repeated tests, according to the US Navy, it has never taken out a ballistic missile in combat.

THAAD has also never been used in combat. And the system could be overwhelmed if North Korea were to launch a series of missiles simultaneously, according to a report from the North Korea monitoring group 38 North. It’s also not effective against submarine-launched ballistic missiles launched from south, east or west of lower South Korea, 38 North said.

Patriot missile defenses have been tested in combat, taking out short-range ballistic missiles during the 1991 Gulf War and the 2003 invasion of Iraq, according to the Arms Control Association.

A Patriot air and missile defense system at a test range in Sochaczew, Poland, in March 2015.
Janek Skarzynski/AFP/Getty

Which target is in the most danger?

The South Korean capital of Seoul, but not necessarily from ballistic missiles.

Seoul sits only about 35 miles from the border with North Korea. That means it could be struck by shorter range rockets and artillery, of which North Korea has thousands of units.

Civilian casualties in Seoul and its northern suburbs from a North Korean artillery barrage could number in the thousands or more, experts have said.

The only protection to such an attack would be an early warning to get in shelters.