Soda sales plummeted by nearly 20%, while fruit drinks decreased by about 15%

Advertising shapes behavior, a truism given new life by a recent anti-soda campaign. A county in the heart of central Maryland aimed a three-year onslaught of TV ads, digital marketing, direct mail, outdoor ads and social media against sugary beverages. This campaign, which was accompanied by policy changes and community outreach, helped reduce sales of sweetened beverages, according to a study published Monday in JAMA Internal Medicine.

Soda sales plummeted by nearly 20% in the area, researchers said, while fruit drinks decreased by about 15%.

What happens to your brain when you give up sugar

“What we really tried to do is say join the movement, make healthy choices easy. It was a very positive campaign, and it was built on ‘We know you want your kids to be healthy. This community is here to help you,’ ” said Nikki Highsmith Vernick, CEO of the Horizon Foundation, a nonprofit that helped initiate the campaign.

“We hope that these findings stick,” Highsmith Vernick said, explaining that the community will be continuing the campaign at the policy and other levels. “I don’t think a three-year campaign is enough to reverse a trend that’s been coming for decades.”

Study: 30% of kids have two or more sugary drinks a day

On its website, Howard County, Maryland, describes itself as “a successful melding of old and new, urban and rural, where the rolling green hills of the Piedmont meet the rocky fall line of the glaciers.” The county’s 300,000 or so residents live between Washington and Baltimore, where they enjoy proximity to 50 federal agencies, universities, Fortune 500 companies, technology, defense and health care companies.

“One of the features of Howard County that I think people find surprising is how diverse it is,” said Marlene Schwartz, lead investigator of the study and director of the Rudd Center for Food Policy and Obesity at the University of Connecticut. She explained that it is among the wealthier counties in the country but is both ethnically and racially diverse.

In the past decade, localities across the nation have lashed out at sugary drinks by passing policies to limit their consumption in schools and government-owned properties, by initiating tax measures and by insisting on warning labels. Howard County was not to be left behind in the national effort to limit consumption of sugary drinks, especially since, as Highsmith Vernick pointed out, the county has “one in four kids who are at an unhealthy weight.”

How much sugar is OK? Paper adds to debate

So in 2013, the Horizon Foundation contacted the Rudd Center to help it initiate a campaign to reduce sugary drink consumption: Howard County Unsweetened.

“Honestly, the reason I was excited by it is, I grew up in Howard County, even though I live in Connecticut now,” Schwartz said.

People were encouraged to move away from sugary drinks and toward “better beverages,” including bottled water, plain tap water and tap water flavored with pieces of whole fruit, vegetables and herbs. Although 100% juice was also designated as a better beverage, communications include the caveat that portion size mattered. Diet soda was also designated as a better choice.

“We did a lot of message research,” Highsmith Vernick said. What she and her colleagues heard is that “parents love their kids; they want to do the right thing by their kids; people are busy; people in low-income communities don’t have a lot of money.” 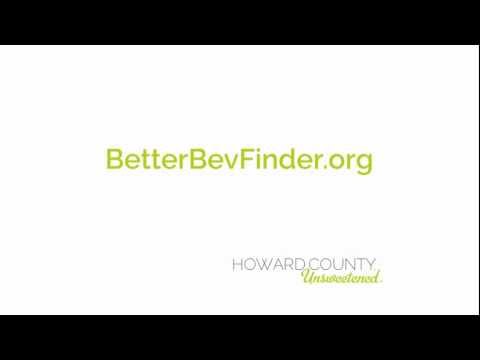 How to stop sugar from sneaking into your child's diet

To measure success or failure, the researchers collected retail sales data from 15 Howard County supermarkets and compared them to 17 equivalent supermarkets in Pennsylvania. They analyzed weekly sales data for a single year before the study (2012) and then compared this to the campaign years, January 2013 through December 2015.

“The analysis is complicated,” Schwartz said, explaining that when you’re looking at change over time in one place, you need to rule out that it’s a general, national trend happening everywhere in the country. After all, researchers have tracked people moving away from sugary soda overtime.

“We’ve been seeing this sort of gradual decrease (in sugary soda sales) on the order of like 1% in a year or 2% in a year across the country,” Schwartz said.

Why sugar intake has increased

Child care centers in Maryland also saw changes during the test period, with state child care facilities having to provide healthy drinks while offering support to breast-feeding moms. Additionally, they need to encourage physical activity and limit the time children spend in front of screens.

According to Dr. Mitchell H. Katz, who wrote an editorial published beside the new study in JAMA Internal Medicine, drinking sugary beverages “is associated with obesity, diabetes, and cardiovascular disease.” In the editorial, he commended the researchers’ use of sales register data (instead of self-reported data from participants), and he added that Howard County’s success in decreasing the sales of sugary beverages “is gratifying.”

Shared resources for other communities

Laura Schmidt, a professor of health policy in the school of medicine at the University of California at San Francisco, said the study is very worthwhile and likened it to community campaigns targeting reductions in tobacco consumption.

Americans get about 8% of their daily calories from sugar drinks.
Photo Illustration/Thinkstock

“To my knowledge, this is the first time we have seen that this approach works for sugary beverages too,” Schmidt said. “A big strength of the researchers’ approach was that they worked with and for community partners to develop and roll out the campaign to reduce sugary beverage consumption. Public health solutions should come from the community.”

Schmidt’s university has sponsored SugarScience.org, a digital educational initiative to helping people understand the science on sugar and health.

“Since then, we’ve seen major declines in employee consumption of sugary beverages,” she said. “And our vendors haven’t suffered financially, because people just buy healthier alternatives instead.”

According to Laura M. Bogart, a senior behavioral scientist at the RAND Corp., the new study “shows the power of communities in being able to make changes, when key stakeholders are at the table and engaged in the process of addressing community priorities.”

Still, it is essential to understand how the campaign led to changes in behavior, Bogart said. Since residents in Howard County had higher incomes and educational levels than the comparison communities, “we cannot be sure whether the campaign would work as well in places with lower socioeconomic status,” she added.

“It would be especially important to do further research to figure out which aspects of the campaign were more effective, so that communities would know how to prioritize different activities,” especially if they are operating with a limited budget, Bogart said. “It would also be important to do a similar study in lower-income communities, to know how well these results apply to other types of communities.”

Can other communities do the same? The Horizon Foundation’s Highsmith Vernick replied without hesitation: “Yes!”

“These are definitely doable, particularly on the policy side,” she said, noting that even communities that are strapped for cash can change policy. She said an important goal of the program was “a peer-reviewed research article in a major medical journal that not only validates our work but gives a road map for other communities across the country.”

“We have messaging and focus group research that we can provide to other interested communities across the country,” Highsmith Vernick said.

According to Schwartz, the positive results in Howard County should hold, since across the country, things have been “consistently moving in that direction. … I feel like that train has left the station. I’d be very surprised if that reversed.” That said, more research would be needed to see whether the gains continue into the future.

One real strength of the intervention was how comprehensive it was; another was its grass-roots origins.

“It really was an example of people in the community making changes themselves,” Schwartz said. “It wasn’t like outside researchers came in and tried to impose something on them. They really did it themselves.”