DNC highlights stories of those facing deportation by Trump administration

Tom Perez is rolling out a new effort to highlight the stories of immigrants deported by President Donald Trump’s administration as one of his first moves as the new Democratic National Committee chairman.

The initiative – dubbed “Faces of Trump’s Mass Deportation Plan” – includes the DNC soliciting and sharing stories of those targeted for deportation who are not violent criminals.

In a two-minute video, the DNC highlights some of those stories. Among them: a domestic abuse survivor who had gone to court seeking a restraining order and a woman who entered the United States 20 years ago after her husband was kidnapped three times in Mexico. 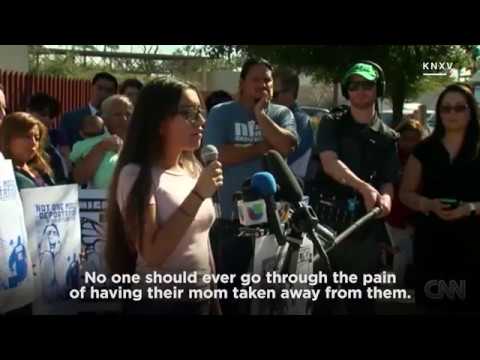 Perez is set to speak alongside Minnesota Rep. Keith Ellison, the DNC’s deputy chairman, on Tuesday at the Latino Victory Fund, where Perez is expected to publicly announce the new effort.

“Donald Trump is lying. He claims he’s only targeting violent criminals when in reality his deportation force is arresting upstanding members of the community and breaking up families,” Perez said in a statement first obtained by CNN. “America is not safer when ICE agents pick up domestic abuse survivors or parents or small-business owners. That only sows fear in communities and makes us less safe by wasting valuable law enforcement resources that should be used catching actual criminals.

“The Democratic National Committee will fight back by (shining) a spotlight on the real faces of those impacted by Donald Trump’s cruel mass deportations. We will not allow this administration keep their stories in the dark,” he said.

Trump’s executive order on immigration led to a major new deportation push by Immigration and Customs Enforcement beginning in mid-February. Homeland Security Secretary John Kelly said in a statement that the administration has “a specific focus on those who pose a threat to public safety, have been charged with criminal offenses, have committed immigration violations or have been deported and re-entered the country illegally.”

Trump defended the deportations last week, describing them as “a military operation.”

Democrats have made highlighting individual stories a major focus as they fight Trump on several fronts – including the travel ban, his recent moves that could dramatically increase deportations and the GOP’s efforts to repeal the Affordable Care Act.

Several Democratic members of Congress plan to bring immigrants as their guests to Trump’s joint address to Congress on Tuesday night.