"The White Helmets" won an Oscar for Best Documentary Short

“The White Helmets,” a documentary about volunteer rescue workers in Syria, took home the Oscar for Best Documentary Short Sunday.

It was the first Academy Award win for Netflix, which distributed the film.

Khaled Khatib, a cinematographer and press officer for the Syrian White Helmets, thanked supporters on Twitter.

“The world stands with the white helmets. Standing ovation at the Oscars. We have won,” he said.

The world stands with the white helmets. - Standing ovation at the Oscars. We have won. Thank you all for your support.#Oscars 💪🏻 pic.twitter.com/yK5rDClsSu

“If we win this award, it will show people across Syria that people around the world support them,” Khatib told CNN before the awards. “It will give courage to every volunteer who wakes up every morning to run towards bombs.”

I get US visa but I haven't traveled to U.S At all and I won't travel to OSCAR due to intensity of work, our priority is helping our people.

Khatib was not able to fly to the United States to attend the event.

In a statement Sunday, the White Helmets said Khatib couldn’t attend the Oscars “due to his passport being canceled by the Syrian regime, despite having been issued a US visa specifically to attend the awards ceremony.”

The Syrian government did not comment on the claims.

When asked about Khaled’s situation, US Department of Homeland Security spokesperson Gillian Christensen told CNN: “A valid travel document is required for travel to the United States.”

‘I wish this war would stop’ 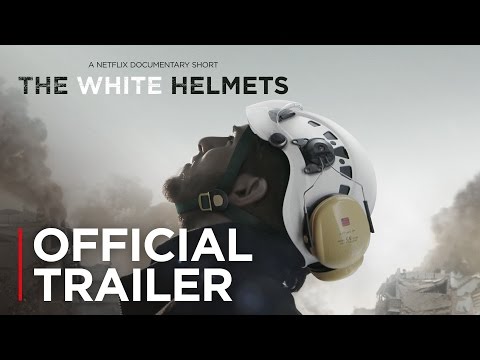 In an interview with CNN before the Oscars, Khatib spoke of his hopes for Syria as well as his experiences working with the White Helmets.

“I took a camera and started volunteering for (them) because I wanted the world to know what the White Helmets are doing and what is happening in Syria,” he said.

Khatib recalled the moment the White Helmets rescued a child from under the rubble during one of his first rescue missions.

In May 2015, 25 of Syria's bravest men made their way to a 10-day training camp in southern Turkey. Each of them has a unique story as to why he joined the Syrian Civil Defence. We asked each of the men what he did before the war, as well as their most memorable story of saving a life.

Ziad Shaheen, 33. Firefighter. "I saved a baby whose father was trying to reach him. He was killed by a crumbling wall. The baby was safe in bed."
Ben Tinker/CNN
Zuhair Armanazi, 39. Blacksmith. "A teacher and three students were thrown out of their classroom, when the regime dropped a bomb on their school. I found a boy, about 11 years old, buried to the chest with rubble. I dug him out and saved him."
Ben Tinker/CNN
Ibrahim Alzoughpi, 28. Barber. "It was a bombing near a bakery. We responded and saved a 17-year-old lady with a head injury. Unfortunately, two of her brothers died in the attack."
Ben Tinker/CNN
Ibrahim Alzoughpi, 25. Blacksmith. "A street area was attacked with six missiles. We rescued two brothers, from a room deep inside the house and off the street. Their parents and other two brothers died, because they were in a room closer to the street."
Ben Tinker/CNN
Ahmed Zaidu, 33. Sculptor. "We were helping to evacuate people from Idlib, and a barrel bomb was dropped. We were able to rescue an entire family, including a mother and two children. We were able to save them all."
Ben Tinker/CNN
Mohammad Altouma, 22. First-year university student, studying mechanical aviation engineering. "The town square in my village was bombed by the regime. It hit my uncle's house. I rescued my aunt, uncle and 5-year-old girl cousin, but her two brothers were killed."
Ben Tinker/CNN
Abdul Kader Suleyman, 32. Farmer. "A month ago in Darkoush, the regime aircraft hit with two thermobaric missiles. We were able to save a 7-month-old girl, but her mother and father died. We were able to place her with her uncle."
Ben Tinker/CNN
Ahmad Khaleel, 47. Former military. "I responded, along with my team, to a thermobaric missile and barrel bombs. Three two-story buildings next to each other were destroyed. 22 people were killed, but I am proud that we were able to pull 6 people out alive, especially the children."
Ben Tinker/CNN
Husam Mudiratee, 27. Policeman. "A two-story building collapsed. We found an 11-year-old boy crouched in the corner, safe. It was the first life I rescued and if I never save another life, that will be enough."
Ben Tinker/CNN
Ali Hubeter, 49. Farmer. "We found two kids in the rubble in Ainsheeb. The two-year-old lost his leg. We thought he wouldn't make it, but he is alive!"
Ben Tinker/CNN
Siraj Aldeen Hassoun, 25. Construction. "There was a bombing in Sarmin. The roof of the second floor of a two-story building collapsed. I shouted, 'Is anybody here?' I heard movement, and found a man in a safe space, thanks to two big rocks on either side of him."
Ben Tinker/CNN
Mahmoud Altaifour, 23. Business management student. "I rescued a man from under a roof alive. When we got there to rescue him, we didn't have the proper equipment and we had to wait before we were able to pull him out. I even rode in the ambulance with him to the because I wanted to make sure he got the best doctor, but he died at the hospital."
Ben Tinker/CNN
Mohammad Danawer, 24. Was in his third year studying math at university. "The regime bombed a refugee camp. We saved so many people, but I mostly remember an old lady, who had an injured leg. It bothered me, because you should be safe at a refugee camp."
Ben Tinker/CNN
Abdulrahman Humaidi, 20. Carpenter. "I was in a village near Salqeen. A missile hit the upper floor of a building and it collapsed. We pulled a 40-year-old man out and his family was thanking us and hugging and kissing, until they realized that his wife and two children died in the attack." Abdulrahman has 4 brothers, all of whom have also joined the White Helmets.

Ben Tinker/CNN
Mohammad Faisal Hammade, 41. Ministry of Agriculture. "They dropped a thermobaric bomb in the village of Sinkar. It hit a house and divided into two parts, one destroyed and one not. I can't describe the feeling that came over me when we found a mother and two children alive, especially since we had such a hard time getting to them."
Ben Tinker/CNN
Yamen Yoused, 27. Construction. "Two days before I came to this course, I rescued a 2-year-old baby. His dad told me where he was trapped and buried. We went and found him alive, but his 14-year-old sister had died."
Ben Tinker/CNN
Mohammad Ata Rashwani, 44. Hospital administration. "We were in a village called Kastim and rescued a man whose entire lower half was buried. A missile hit a car outside the shop he was in. We took him to the hospital and he lived." Mohammad joined the White Helmets five days after his son was killed working the very same job.
Ben Tinker/CNN
Bilal Salloum, 29. Syrian Secret Service. "My whole village used to leave during the day and only come home at night to sleep. There was this old married couple, whose home was hit with a barrel bomb. They both lived, we saved them, and took them to the hospital."
Ben Tinker/CNN
Mahmoud Staify, 20. Was about to start high school. "Idlib was being heavily bombed when it got out from under regime control. We arrived at the end of a tunnel that was so small you could only move the dust with your hands. We found a 60-year-old man alive in the basement, and spent 6 hours getting him out."
Ben Tinker/CNN
Isa Mohammad Jalloul, 25. Policeman and law student. "We responded to a bombing in a small village and ran to the basement. It was full of 15 women and children. 13 were dead, but we were able to save two, a man and a woman both in their twenties."
Ben Tinker/CNN
Abdulkareem Qaddour, 20. Was in high school. "A barrel bomb dropped near my best friend. He had shrapnel in his head, neck and chest. I took him by ambulance to the hospital, but he died on his way to the operating room."
Ben Tinker/CNN
Ahmad Rahhal, 27. Policeman. "First, two of our guys went in for the rescue and were 'double tapped.' We went in to rescue them and searched for other survivors. We found three young girls alive and well, plus an infant, who unfortunately died at the hospital." Ahmad received a round of applause from the rest of the White Helmets when he announced he is getting married next week when he returns to Syria.
Ben Tinker/CNN
Fadi Ibrahim, 36. Carpet factory employee. "In my village, a man was stuck under the rubble. Three hours later, we got him out. This is someone that I know, walk by on the street and could've been dead."
Ben Tinker/CNN
Hussain Alassi, 25. Was about to start college. "We rescued a family of three in the village of Mazra, a little 6-year-old girl, plus her father and mother. It was a huge building, and the whole second floor had collapsed on the first. We finally found them, cut a hole in the wall and took them to the hospital."
Ben Tinker/CNN

“I recorded this moment. It got a lot of YouTube views, and I took the decision to continue my work,” he said. “It is easy for anyone to kill someone, but it’s very hard and very difficult to save lives.”

When asked about his hopes for the future, Khatib said he hoped to finish his education which had been put on hold by the war.

“I wish this war would stop tomorrow,” he said. “We want to rebuild Syria, rebuild the stores, hospitals, the markets and the universities. We want to liberate Syria and let the refugees return to the country.”