Architect got idea while looking out of a New York skyscraper

Residents will be able to park cars next to their apartments

It may soon be adding a new one – the world’s first rotating skyscraper.

It’s the brainchild of architect David Fisher of Dynamic Architecture.

Fisher envisions an 80-story, 1,273-foot tower in Dubai with floors that can rotate 360 degrees in both directions. He said he got the idea for a rotating tower that continuously changes shape more than a decade ago while staring out of the Olympic Tower in New York. 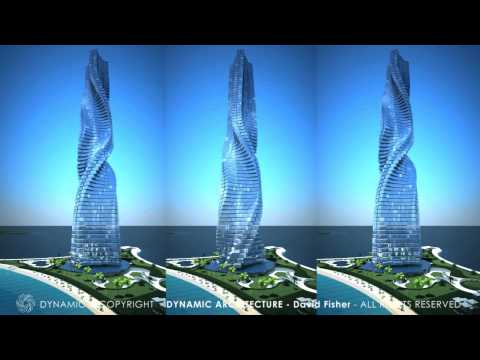 Fisher first pitched his idea back in 2008, but it never got off the ground. Now Dynamic Architecture hopes the skyscraper – dubbed the Dynamic Tower – will be gracing Dubai’s skyline by 2020. It would be one of Dubai’s tallest buildings, in a city awash with high-rises.

If everything goes according to plan, the building’s rotating floors be will be just one of its high-tech draws. Voice-activated technology would allow residents to spin their apartments just by speaking, and up to 79 wind turbines placed horizontally between the floors and solar panels on the roof will produce the tower’s energy.

There’s more: A special elevator built inside the central concrete core will let residents transport their car to their floor and park it next to their apartment.

The tower’s floors would be prefabricated units, made of steel, aluminum and carbon fiber materials. Fisher says the floors will be assembled at a factory and then later attached to the tower – that’s another first for skyscrapers.

It’s unclear what the price tag is for this massive project, but Dynamic Architecture says the price for an individual apartment unit could range from $4 million to $40 million.

Fisher hopes his tower is the beginning of a change in the way architects think about their jobs.

“An architect should design buildings that adjust to life,” he said. “They should adapt to our space, our functionalities and our needs that change continuously – and even to our sense of beauty, itself in continuous motion.”