More rain in store after 5 killed in California storms

By Steve Almasy, Azadeh Ansari and Kelly McCleary, CNN
Updated 2:45 AM EST, Sun February 19, 2017
PHOTO: KOVR
socal storms
Now playing
01:17
Deadly storm slams Southern California
daylight saving jennifer gray explainer orig_00001506.jpg
Now playing
01:32
Daylight Saving Time: Why we have it
Now playing
01:54
Why snow and blackouts in Texas are a preview for all of us
Now playing
00:52
Truck slides down slick hill after winter storm
PHOTO: JOSH EDELSON/AFP/AFP/Getty Images
Storm chasing photographers take photos underneath a rotating supercell storm system in Maxwell, Nebraska on September 3, 2016. Although multiple tornado warnings were issued throughout the area, no funnel cloud touched down. / AFP / Josh Edelson / XGTY RESTRICTED TO EDITORIAL USE / MANDATORY CREDIT: "AFP PHOTO / Josh EDELSON" / NO MARKETING / NO ADVERTISING CAMPAIGNS / DISTRIBUTED AS A SERVICE TO CLIENTS == (Photo credit should read JOSH EDELSON/AFP/Getty Images)
Now playing
00:59
The difference between a tornado watch and a warning
PHOTO: Brian Davidson/Getty Images
DODGE CITY, KS - MAY 24: A tornado is seen south of Dodge City, Kansas moving north on May 24, 2016 in Dodge City, Kansas. About 30 tornadoes were reported on Tuesday in five different states from Michigan to Texas. Damage to homes and property was also reported in Ford County, Kansas. (Photo by Brian Davidson/Getty Images)
Now playing
01:41
How to prepare for severe weather
PHOTO: Courtesy Amy Lloyd
Now playing
01:06
Why flash floods are so dangerous
PHOTO: Franck Verdière/Twitter
Now playing
01:10
What 'rapid intensification' means for storms
Now playing
01:29
Steer like this to stay out of accidents in the snow
nor'easter explainer orig nws_00002211.jpg
Now playing
01:03
What is a nor'easter?
PHOTO: Brandon Clement / Live Storms Media
east coast storm waves noreaster orig mg_00001813.png
Now playing
01:07
Massive waves crash over top of coastal homes
PHOTO: Mic Smith/AP
Larry Pierson, from the Isle of Palms, S.C., purchases bottled water from the Harris Teeter grocery store on the Isle of Palms in preparation for Hurricane Florence at the Isle of Palms S.C., Monday, Sept. 10, 2018. (AP Photo/Mic Smith)
Now playing
00:57
How to prepare for a hurricane
PHOTO: NASA
IN SPACE - In this handout photo provided by NASA, Hurricane Patricia is seen from the International Space Station. The hurricane made landfall on the Pacfic coast of Mexico on October 23. (Photo by Scott Kelly/NASA via Getty Images)
Now playing
01:07
Why hurricanes are so hard to predict
Now playing
01:26
Hurricanes: What you don't know
PHOTO: Ethan Miller/Getty Images North America/Getty Images
LAS VEGAS, NV - JULY 07: Lightning strikes during a thunderstorm on July 7, 2015 in Las Vegas, Nevada. The monsoon storm dropped heavy rain and hail in parts of the valley causing street flooding and power outages. (Photo by Ethan Miller/Getty Images)
Now playing
01:36
How to protect yourself from lightning
Now playing
01:21
What is a polar vortex?

Rain expected near Oroville Dam in Northern California, but lake levels have dropped

Waterlogged Northern California will get more heavy rainfall into Wednesday, renewing fears about flooding in the region.

A flood warning is in effect for Northern California’s interior counties through Thursday. Storms started overnight Saturday, with two to four inches of rain expected by Wednesday, CNN meteorologist Allison Chinchar said. Some areas may get up to 10 inches and the driving rain could drastically reduce visibility, Chinchar warned.

Meanwhile, power is still out and cars submerged across Southern California, which experienced one of its most drenching storms in recent years.

On Saturday, the Thousand Oaks Police Department said a body was recovered from a river gorge. Police didn’t give any details.

The rain headed for the north likely won’t pose a threat to Oroville Dam, officials said Saturday, thanks to falling water levels.

The storm proved harrowing for one Los Angeles driver on Friday night, when the road beneath her car gave out, plunging her to the bottom of a 20-foot sinkhole, CNN affiliate KTLA-TV reported.

“My car kept turning and turning upside down, and I was just like, ‘I got to stay calm,’ ” Stephanie Scott told the TV station.

Scott managed to climb out of her car and yell for help. When firefighters arrived, they used ladders to free her from the sinkhole.

“It’s totally a miracle,” Scott told KTLA. About 10 minutes after she was pulled to safety, a van teetering on the edge of the hole crashed down on top of her car, the station reported.

Rescuers were responding to a report that a semitrailer had fallen over the edge of southbound Interstate 15. KABC video shows the fire truck’s right rear tire dangling over the edge.

Suddenly, more pavement gives way, and the truck tumbles over the side.

INCREDIBLE VIDEO: part of SB I-15 is washed away; fire engine tumbles off the side; fortunately no one hurt pic.twitter.com/5VMzQEBlqa

No one was in the fire truck when it fell, and no one was hurt, fire officials told KABC. The driver of the semitrailer was also OK, KABC reported.

While some roads are washed away, others are covered in thick mud and rocks.

Mike Myers posted video to Twitter from Highway 138 in the West Cajon Valley showing a car with its tires buried in mud, the front bumper apparently ripped off.

The rain was so furious at one point, a parking garage in Los Angeles turned into a waterfall.

YO THIS RAIN IS FOR REAL IN LOS ANGELES TODAY!! It's turning parking garages into water parks #raininla #LA pic.twitter.com/tmKVL0T7hW

The Santa Clara River is rushing through @santaclarita right now. STAY AWAY from rivers & channels during #LARain. #StormWatch pic.twitter.com/oF6PbkaqVr

The storm has also blanketed higher elevations with snow.

Parts of the south-facing foothills and coastal mountain slopes could see up to 10 inches of rain through the weekend, meteorologists said.

Oroville Dam ‘is holding up’

Related Article Oroville is the best warning that infrastructure matters

The weather brings more worries for communities south of Oroville Dam. Rainfall over the next seven days could total more than 12 inches.

The water level is at 854 feet, 47 feet below the mark where a emergency spillway, which is under repair, is needed. 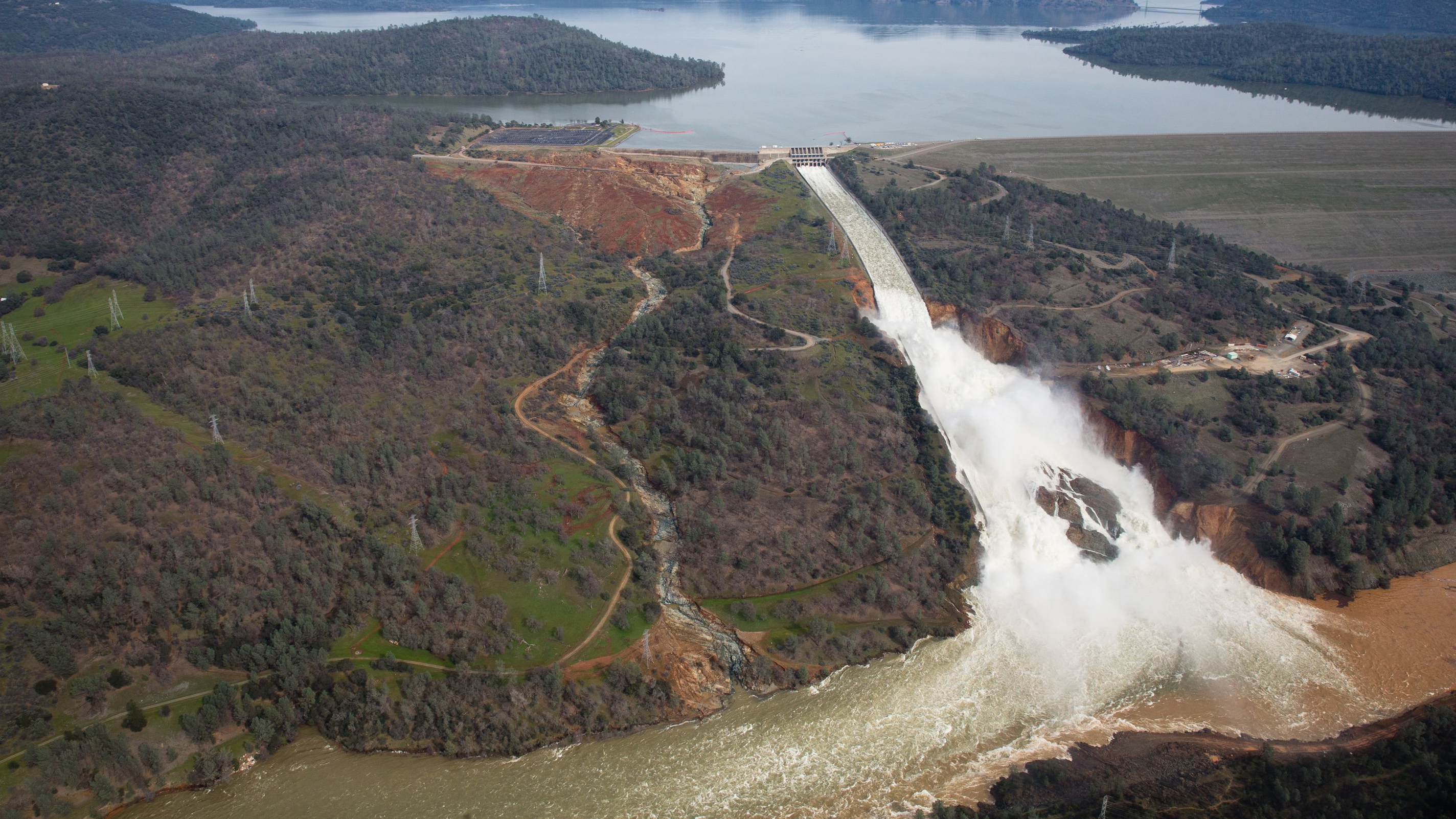 The amount of water flowing into Lake Oroville is much less than the water allowed to flow out through a primary spillway in the dam.

Authorities have even reduced the outflow by 30%, allowing crews to clean up debris below the dam, the tallest in the United States.