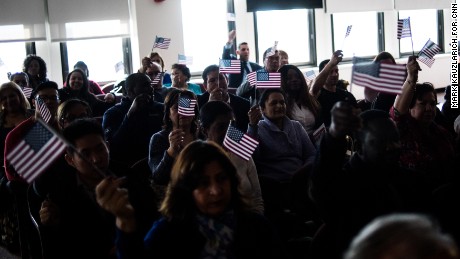 People wave their flags during the playing of "America the Beautiful" at a naturalization ceremony at the USCIS Peter Rodino Federal Building in Newark on Thursday, February 16.

Reborn in the USA

By Eric Levenson, CNN
Photographs by Mark Kauzlarich for CNN

Eighty-nine people arrived at a nondescript office building in northern New Jersey, took the elevator up 15 floors and settled into a drab room lit by fluorescent lights.

They'd navigated through years of patience-testing paperwork to get to this point. In 45 short minutes, they'd proudly step into the future as American citizens.
The ceremony is a short affair.
Becoming a US citizen takes a long time. Once immigrants get their green cards, they need to know English, need to have lived in the United States for at least five years, and need to pass a US civics test, among other things.
But after all that time, the ceremony itself is quick and easy.
Some of these ceremonies are held at photogenic, symbolically American places like Ellis Island.
Read More
But far more often, the ceremonies take place in bland federal buildings in rooms filled with large American flags, like the one at the Peter Rodino Federal Building in Newark, New Jersey.
Thomas Heinrich moved to the US about 30 years ago.
That 45-minute ceremony was a long time coming for Thomas Heinrich. He moved to the US from the former West Germany about 30 years ago, and has since married and had three kids here. The civics test was easy for him; he's a professor of American history at Baruch College.
Failure "would have been a huge embarrassment," he said, laughing.
Ahmed El-Mallah hopes to become a nuclear engineer.
Unlike Heinrich, Ahmed El-Mallah made up his mind to become a US citizen "the first second" he arrived from Alexandria, Egypt, five years ago.
He's studying nuclear engineering, a field he said he wouldn't be able to pursue in Egypt. The best jobs in the field, such as in nuclear labs or in the Navy, require US citizenship, and he hopes to enter the workforce once he finishes his master's degree.
"I'm very excited," El-Mallah said. "I'm very lucky to be here today."
The would-be citizens take the Oath.
Like any group presentation, the naturalization ceremony relied on PowerPoint. For such a climactic moment in their lives, it was surprisingly mundane. Archival photographs of immigrants coming to the United States, pictures showcasing the country's natural beauty, and quotes from recent citizens flashed across the screen before them.
The new citizens stood to sing the national anthem, and then James Fobert, supervisory Immigration Services officer, said a few words.
He mentioned "e pluribus unum," the unofficial US motto that's printed on currency. The phrase is Latin for "out of many, one" -- similar to the population of the United States, which includes people from many countries, working together as one, Fobert said.
"You represent and reflect the unofficial motto," he told the crowd.
Leidiane Loureiro had been thinking of citizenship for a while.
For Leidiane Loureiro, becoming a citizen is "the biggest victory of my life," she said. She arrived as a student from Brazil about 12 years ago, she said, and started out scrubbing bathrooms at a deli, knowing little English.
She has since married an American citizen and found a steady job at Bank of America. She's been talking about becoming a citizen for a while now. "I don't plan to go back," she said. "I already feel like a part of the country."
The citizenship packet contains a card-sized Oath of Allegiance.
As the ceremony progressed, Fobert read the names of each of the 37 countries represented in the crowd, and the new citizens stood when their country was called. The crowd then read aloud the Oath of Allegiance, printed on a small white card in their citizenship packets.
And 140 words later, the 89 people were naturalized citizens, joining the 6.6 million others over the past decade.
Esther Quarshie was driven by educational opportunities.
For Esther Quarshie, education was the main reason for coming to the United States. Originally from Ghana, Quarshie wants to be a nurse, and being a citizen will give her the opportunity to continue learning English and apply for a better job, she said.
"School -- that's all my motivation," she said. "My number one [reason] is education."
Love brought Domingo Gallardo to the US.
Domingo Gallardo, on the other hand, came for love. He emigrated from Spain about eight years ago to be with his wife Esther, an American citizen.
The birth of their first child nine months ago was the moment he knew it was time for him to become a US citizen, too.
Citizens pick up their certificates.
After the oath, the Pledge of Allegiance, and a soulful rendition of "America the Beautiful," the country's newest citizens rose to collect their official certificates of citizenship.
Fobert, the ceremony's supervisor, asked the crowd again how many countries they were all from.
"Thirty-seven," several voices called out.
<ul class="cn cn-list-hierarchical-xs cn--idx-42 cn-zoneAdContainer" data-layout="list-hierarchic