There is currently less sea ice surrounding the Antarctic continent than at any point since reliable records began in 1979.

“As of Tuesday, it looks like we hit a new record low in the satellite era,” Mark Serreze, the director of the National Snow and Ice Data Center, said.

It wasn’t too long ago – less than 3 years to be exact – that Antarctica was in a multiyear stretch of record highs for sea ice.

This fact was frequently trumpeted by climate change skeptics as evidence against global warming.

Using the Antarctic sea ice maximum as “evidence” to counter the realities of climate change might always have been considered “thin,” but that argument has now melted away.

The rapid decline, from record high extents of sea ice, to current record lows has been startling.

“It has certainly caught our attention,” says Serreze.

According to Eric Rignot, a senior research scientist at the Jet Propulsion Laboratory in Pasadena, California, “the changes in sea ice in the Antarctic are amazing.” Along with the Antarctic, we are simultaneously seeing record low sea ice in the Arctic, which Rignot characterized as “mind-boggling.”

When you combine both of these results, he said, “they illustrate in a spectacular manner how fast our planet has been warming up in recent decades.” 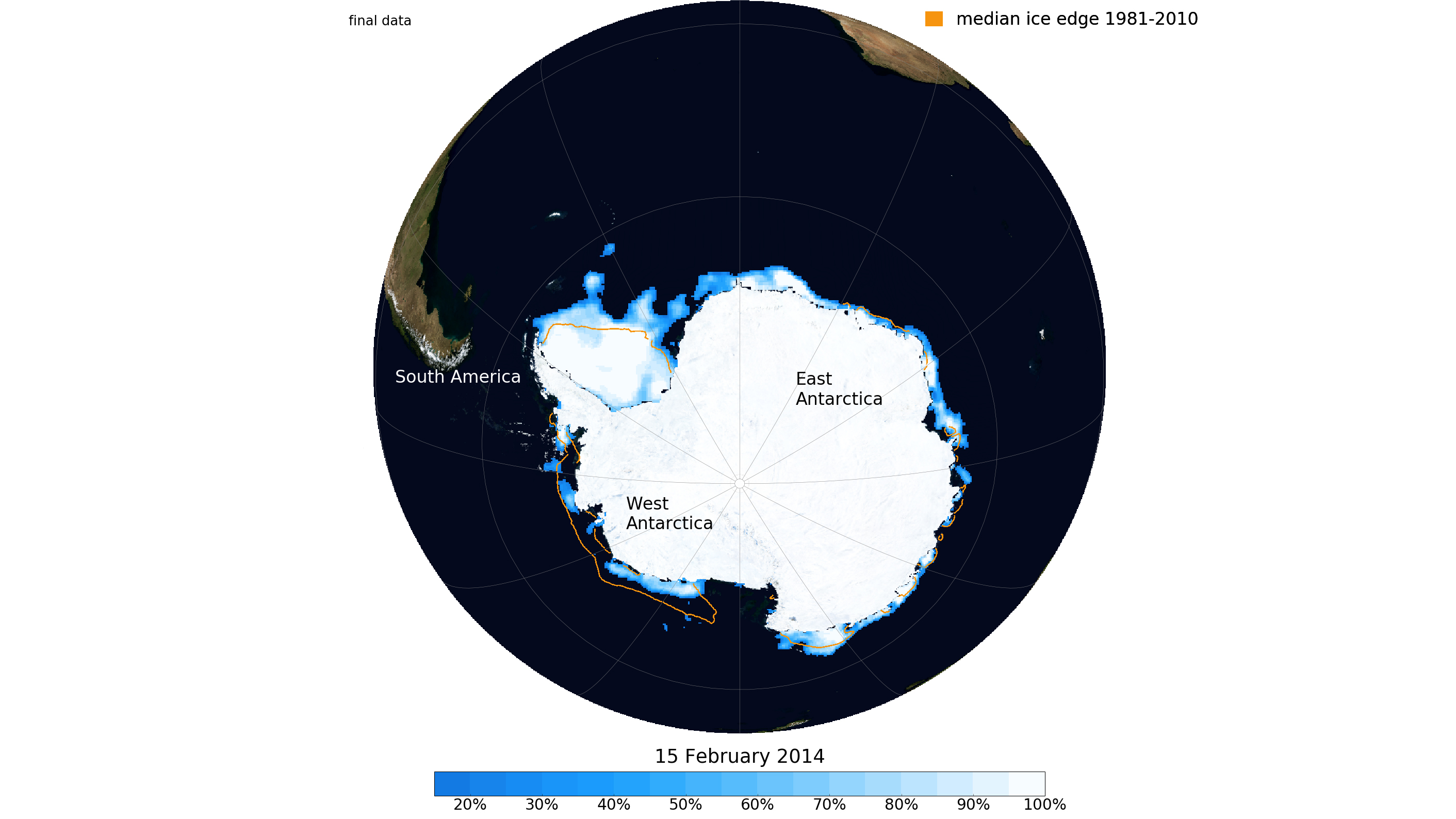 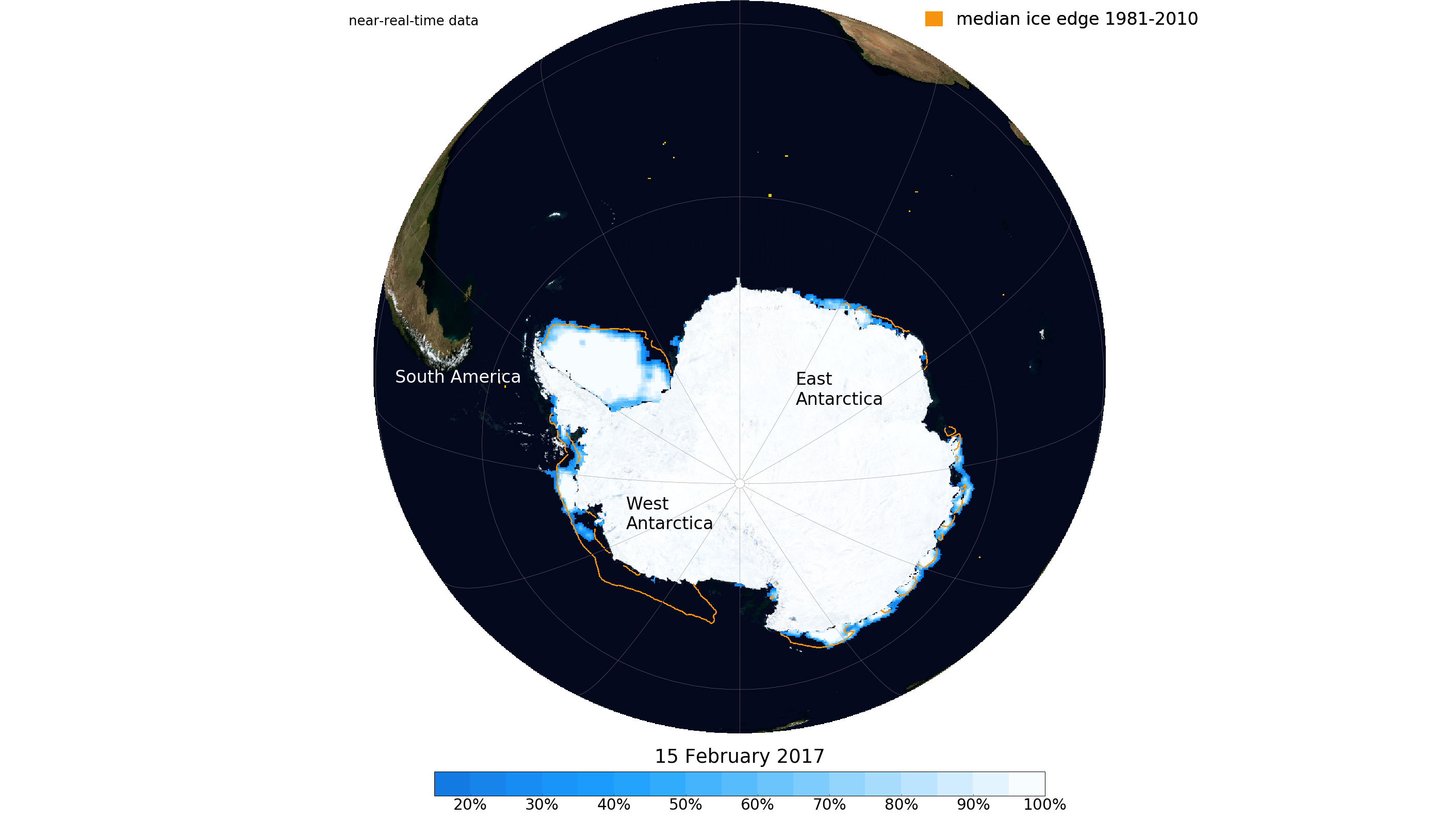 The current record minimum in sea ice on its own does not provide “very credible evidence for global warming” according to Walt Meier, a research scientist with the Cryospheric Sciences Laboratory at NASA’s Goddard Space Flight Center, who has tracked sea ice data going back to 1979.

ILULISSAT, GREENLAND - JULY 20: An iceberg floats through the water on July 20, 2013 in Ilulissat, Greenland. As Greenlanders adapt to the changing climate and go on with their lives, researchers from the National Science Foundation and other organizations are studying the phenomena of the melting glaciers and its long-term ramifications for the rest of the world. In recent years, sea level rise in places such as Miami Beach has led to increased street flooding and prompted leaders such as New York City Mayor Michael Bloomberg to propose a $19.5 billion plan to boost the citys capacity to withstand future extreme weather events by, among other things, devising mechanisms to withstand flooding. (Photo by Joe Raedle/Getty Images) (Photo by Joe Raedle/Getty Images)
Joe Raedle/Getty Images Europe/Getty Images
video

Meier points out that Antarctic sea ice is extremely variable.

“It has a much higher seasonal variability (change from min to max) than the Arctic,” he said.

Since Antarctic sea ice is basically in a ring around the continent, it is exposed to open ocean on its edges and vulnerable to rapidly changing ocean and wind conditions. Meier believes that it is the changes in winds in particular that are the main driver behind the recent collapse in sea ice cover in Antarctica.

“I think a big factor is the Southern Annular Mode,” Meier said, “(which) is a cyclical oscillation in the atmospheric circulation pattern, akin to the El Niño cycle … it’s an indication of how strongly the winds blow around the Antarctic continent.”

For much of the past several years this pattern has been in a positive phase, which is conducive to winds that promote ice growth.

“But towards the end of 2016, it shifted negative,” according to Meier, which resulted in winds blowing from the north that restrict ice extent.

Warmer ocean temperatures could also be playing a role in the lessening ice, something that scientists have been warning about for years. Warmer ocean temperatures, resulting from both natural variability and man-made climate change, are likely eroding Antarctic sea ice and land ice, such as glaciers, from the bottom and could eventually lead to sea level rises up to 6 feet.

Ben Adkison
Ever-changing landscape: Adventure photographer Ben Adkison tells CNN about his work on sea ice safety and logistics at US Antarctic research center McMurdo Station: Cracks in the sea ice can form and change throughout the season, sometimes creating pressure ridges where water can break through. United States Antarctic Program staffers regularly check these cracks to ensure it is safe to drive vehicles over them.

Ben Adkison
Nilas ice: Late in the fall (April and May) the sea ice begins to freeze on the surface of the water. Known as nilas ice, this glassy smooth surface initially looks black and is just a few inches thick. As the ice continues to grow, until October or November, it becomes whiter in color and can be up to eight feet thick.
Ben Adkison
Underneath the ice: The world beneath the sea ice is one of the least explored landscapes on Earth. The under-surface is covered in jagged ice crystals called platelet ice. They're formed when ice crystals floating in the water and freeze to the ice surface in the same way frost or dew forms on foggy mornings.
Ben Adkison
Icebergs: Icebergs are pieces of freshwater ice that break away from a glacier or ice shelf. While often seen by cruise ship travelers further north of McMurdo Sound, the pictured icebergs are grounded and held in by the sea ice. This one is four miles long and has been in the same spot for years.
Ben Adkison
Penguins: Emperor (pictured) and Adelie Penguins wander along the sea ice edge during the summer season. The National Science Foundation funds researchers who study how these birds are affected by climate change.
Ben Adkison
Seals: Weddell seals populate McMurdo Sound and, from a distance, can resemble large slugs. They keep holes open along sea ice cracks so that they return to the water when needed. The seals can dive to depths of up to 2,000 feet.
Ben Adkison
Logistics: United States Antarctic Program researchers and support staffers use different types of tracked vehicles to safely travel along the sea ice. A PistenBully is used to assess sea ice routes for safe travel.
Ben Adkison
Edge science: While much of the research is based on the fast ice or close to shore, certain projects require scientists to take samples at the ice edge. Specialized restraint systems are in place to keep these two scientists out of the water as they take plankton samples to study the effects of ocean acidification. Plankton is a key member of the ocean food chain so it's important to understand how climate change is affecting the population.

Ben Adkison
Melting sea ice: As temperatures rise and the sea ice weakens, the sea ice eventually breaks up into ice floes and gets carried north where it eventually melts. During January or February the ice in front of McMurdo Station can break up and disappear in less than a day.
Ben Adkison
Supplies: In late January each year, a supply ship docks at McMurdo, bringing a year's worth of food, supplies, and equipment too large to carry on cargo planes. An icebreaker breaks a channel through the sea ice to allow the ship safe passage to McMurdo. A fuel tanker will also arrive to offload millions of gallons of gas, diesel and jet fuel to support science logistics at the center.
Ben Adkison
End of season: The main research season starts in October and ends in February, taking advantage of the sunlight and warmer temperatures. The station holds up to 1,000 people each summer, but only 150 or so people stay through winter. The time is used to repair vehicles and other equipment, check and organize all the supplies from the resupply ship and ready the station for the new season. Pictured: A frozen starfish at Cape Evans on Ross Island.

Meier believes that global climate change will lead to a decrease in the sea ice in Antarctica, but since there is so much natural variability, it will likely take many more years before we can see the trend for sure.

“We do expect to see Antarctic sea ice decrease over the long term in response to warming, but there is so much variation naturally that it may still be a while before a warming signal shows up outside of the noise of natural variations.”

Have we reached the bottom?

Though 2017 has already seen sea ice reach the lowest extent on record, we likely have not yet hit the bottom. Sea ice in the Antarctic does not normally reach its minimum extent until later in February.

Athena Dinar, communications manager for the British Antarctic Survey, acknowledged this years’ ice loss in the Antarctic, and said more loss is likely.

“The low levels of sea ice have been reached due to the near total loss of sea ice in Ross Sea and Amundsen Sea, which occurred in January.”

We have seen the ice continue to decrease this week, even since the minimum record was reached according to Dinar, and “it is likely we will see further retreat over the next few weeks.”