The anti-Trump protest movement digs in – but can it win?

Now, with Trump in the White House, they view the Democratic establishment as ripe for the picking

Rafael Shimunov was at home in Queens on January 28, when he got word that the protests outside the international arrivals terminal at John F. Kennedy International Airport had begun to swell.

“I rushed out, didn’t have any of my equipment, just my cell phone, and was there,” he said 48 hours after his livestream of the demonstrations – which eventually drew thousands and set off a taxi strike – had been viewed 15 million times on Facebook. He spent the next day at the doctor, his hands numbed and bitten by the frigid winds off Jamaica Bay.

“You can look at the video or ask people and you’ll see, immediately you saw a diversity in the types of people in the group,” Shimunov said. “It wasn’t people I see at every rally. It wasn’t people you would see at climate, it wasn’t one age group or one income – it was representative, so for every few people of a certain type, I saw hundreds and hundreds later. It just kept exploding.”

Shimunov, 38, was born in the former Soviet Union and came to the US as a child and a refugee in the early 1980s. Now he is the creative director for the Working Families Party, a small political organization with national ambitions and a growing northeastern power base.

In the two-and-a-half weeks since President Donald Trump’s inauguration, an unrelenting wave of protests against the new administration – and its early blitz of controversial executive actions – has emboldened grassroots activists.

Just three months ago, these groups were cooking up more modest plans to hold a Clinton administration to its progressive promises. Now, with Trump in the White House, they view the Democratic establishment as ripe for the picking. Activists like Shimunov are focused on nurturing the new energy on the streets, translating blunt liberal outrage into a durable progressive mobilization.

There have been sparks before. But Shimunov believes this time around will be different. The usual suspects have been joined by novices. Protesting has become cool – a woke alternative to Sunday brunch.

“I’ve been through Occupy, I’ve been in Black Lives Matter (events), and it seems that for regular, normal, everyday people, activism is becoming part of their routine,” he said. “A part of their lifestyle.”

For RoseAnn DeMoro, the executive director of National Nurses United, the first national union to back Sanders in the primary, it is a question of necessity.

“The reality is heroes aren’t made, they’re cornered,” she said. “The millennials are increasing in number and frustration. They’re the group that has not much to look forward to. They’re going to continue to protest because they don’t have anything to lose.”

The possibilities were put on tantalizing display during the Trump administration’s chaotic opening weeks.

After millions turned out in Washington and around the country for the women’s march protests on January 21, tens of thousands more crowded airports and city centers to rail against the White House travel ban the next weekend. In between and since, smaller, more tactical demonstrations have targeted Democratic officials seen to be going wobbly against Trump nominees during Senate confirmation hearings. On a frozen Tuesday night in Brooklyn, thousands of New Yorkers gathered on the streets outside Senate Minority Leader Chuck Schumer’s home near Prospect Park to ask “What the f—, Chuck?” 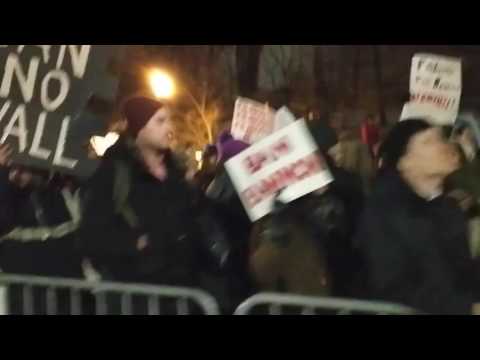 “Resist Trump Tuesdays” are quickly becoming a staple of this charged moment. The most recent action saw hundreds of protesters outside Goldman Sachs headquarters in Manhattan. That followed a weekend “LGBT Solidarity Rally” at the Stonewall Inn, a National Historical Landmark and the venerated home of the early gay rights movement. Days earlier, Yemeni bodega owners went on strike, closing their groceries for eight hours on a weekday in defiance of Trump’s travel ban.

In conservative California and Florida districts this weekend, throngs of demonstrators angrily confronted GOP congressmen who have vowed and voted to repeal Obamacare. Out west, Rep. Tom McClintock left an event with a security escort as protesters chanted “Shame on you!” Florida Rep. Gus Bilirakis faced tough questions in a scene, captured on video, that echoed the contentious meetings faced by Democrats in 2009 when they went home to sell voters on President Barack Obama’s healthcare plan.

“These are people who are getting engaged in protests for the first time,” Adam Green, co-founder of the Progressive Change Campaign Committee, said last week. “It’s really the white blood cells of democracy attacking unconstitutional actions and a fairly illegitimate president.”

Activists organizations like PCCC spend years building out email lists, raising money and slowly staking out influence in a dynamic political economy, where success on the national level – in this case, two terms of Obama – can open one door while closing thousands more. After a decade of Democratic control in Washington, rank-and-file liberals had mostly retreated from the activist community.

“Some organizations would have it be the highlight of their year if people showed up at events across the country in response to months of planning,” Green said. “And here it happens within a couple hours, organically.”

Taking on Trump – and the Democrats

Translating that raw energy into dedicated political action, while sustaining what can be a mentally and physically draining protest campaign against an aggressive administration, has been a unique and unexpected challenge. Establishment Democrats were slow to the draw. Some, like Chicago Mayor Rahm Emanuel, have been dismissive, urging partisans to “take a chill pill” and proceed with surgical focus on vulnerable GOP officeholders. Others are interested but anxious, concerned that embracing the left will alienate moderate voters.

But there is little appetite for half-measures among the vanguard of the protest movement. Their logic is simple: The Clinton campaign – and elected Democrats more broadly – preached pragmatism during most of Obama’s time in office and throughout 2016. And for that, they lost. Trump’s victory has created pain – but also an opening.

“This is not just the beginning of the ‘tea party of the left’ but a larger movement for civil rights that could make history,” said Moumita Ahmed, founder of “Millennials for Revolution,” an offspring of the Sanders campaign. “The steady flow of protests will absolutely continue and get bigger and bigger.”

“This is a movement that has been building for a while. No one is getting tired. We are only going to get more determined and have more people join us,” she said. “You saw it in Washington, but it wasn’t just the women who were marching in Washington – it was the women who were marching around the country. In every state, in the reddest of congressional districts. And they were saying we demand more: stand up for us.”

The promise of Occupy Wall Street, a resounding but brief response to the financial crisis – along with the successes of the “Fight for $15” minimum wage campaign, the rise of Black Lives Matter and the thundering coalition of resistance that backstopped the Standing Rock Sioux tribe in their fight to block the Dakota Access Pipeline – has led activists into the Trump era with a heightened awareness of the opportunities – and challenges – up ahead.

“Since Occupy, people talk almost routinely about the 99% and the 1%. I think that did help launch a populist movement in America,” said Larry Cohen, board chairman of Our Revolution, the organization formed by Sanders after his campaign ended. “January 21st, with millions of women marching around the world, particularly in this country, was similar – a gigantic scaling up of what people could imagine. So you’re always going to see big moments. The question is can we build big movements?”

“Part of the winning,” Cohen added, “has got to be about addressing, in a much deeper way, the economic issues that we face and not just talk about continuity from the Obama years.”

How the progressive left, now led by Sanders allies, is (or is not) able to engage more moderate Clinton voters on that point will go a long way toward determining the movement’s longevity and whether a party still riven by the primary campaign can rebuild and rebound. In the run-up to the Women’s March on Washington, organizers huddled repeatedly, spending hours debating, editing and eventually crafting a mission statement that took care to acknowledge dozens of groups with diverging interests.

The race to take over the Democratic National Committee chair has been optimistic but anxious, with the front-runners tap dancing carefully around the party’s fissures. Tom Perez, the former Obama administration labor secretary, has the establishment juice, but Minnesota Rep. Keith Ellison is the Berniecrat favorite. The vote is only weeks away, but the winner will inherit a party still facing fundamental questions about its path forward.

Those divisions are bound to clash with new alliances forming on the streets, which will be tested as the 2018 midterm elections near. For now, though, organizers are betting that opposition to the Trump agenda serve as a tie to bind what they describe as overlapping or intersectional interests.

“I think there will be subsets that will peel off. You’ll peel off subsets with tax (cuts),” the NNU’s DeMoro said. “But for the most part, the average person who is involved in the protests – I don’t think they have a choice.”