Could Trump fracture US and Australia’s ‘great alliance’?

For more than 70 years, Australia and the United States have been inseparable allies.

Military, intelligence and cultural ties, combined with billions of dollars in investment and trade, built what former US President Obama described as a “great alliance.”

But experts say the fallout from the rise of US President Donald Trump, who had a heated phone call with Australian Prime Minister Malcolm Turnbull on the weekend, could push the two countries apart.

“I think there will be long term consequences,” Australian National University School of Politics professor John Warhurst told CNN. “It may well be that Trump’s US and the rest of the world is fundamentally changed over the coming years.”

Do you believe it? The Obama Administration agreed to take thousands of illegal immigrants from Australia. Why? I will study this dumb deal!

In a phone call on Saturday, Trump and Turnbull butted heads about a deal struck with the Obama administration for the United States to take 1,250 refugees from Australia’s offshore detention centers.

“I hope that friends on both sides can limit the damage that Mr Trump has done today … It’s a very troubling start to Mr Trump’s management of the Australia alliance,” Executive Director of Sydney’s Lowy Institute, Dr Michael Fullilove, told CNN.

The US-Australian alliance dates back to the height of World War II, when Australian Prime Minister John Curtin announced a major shift in foreign policy.

“Australia looks to America, free of any pangs as to our traditional links or kinship with the United Kingdom,” he wrote in his New Year message published on December 27, 1941.

Since then Australia has fought in at least five wars with the United States, including Vietnam, Afghanistan and Iraq. US troops are stationed at a military base in the northern Australian city of Darwin, as part of a deal struck by Obama.

More than 70 years after Curtin’s message, speaking to the US congress in 2012, Prime Minister Julia Gillard reduced Speaker John Boehner to tears as she told them, “Americans can do anything.”

Australian Prime Minister Julia Gillard, 'Americans can do anything'. 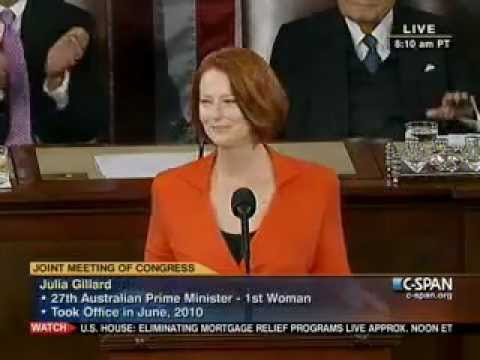 The two even share confidential information as part of the exclusive intelligence sharing arrangement known as “Five Eyes,” along with Canada, New Zealand and the United Kingdom.

“It’s a cultural alliance, it’s certainly a military alliance and in that sense it’s Australia’s closest alliance. I don’t think any other countries match the closeness of that relationship,” Warhurst said.

Tens of billions of dollars of trade flows between the countries every year, making the US Australia’s second-largest trading partner in 2015.

Even before Trump’s rise to power, there had been complaints in Australia about the closeness of the US alliance.

“For generations of (Australian) politicians it’s been the default option – the alliance is vital,” International Politics professor Mark Beeson at University of Western Australia told CNN.

US-Australia refugee deal: What you need to know

“However there have been the beginnings of the debate in Australia about what the benefit of the alliance was … What is Australia’s vital strategic interest in Iraq and Afghanistan?”

Beeson said Trump could push Australia towards closer alliances with its allies in the Asia region, including South Korea, Japan and Indonesia.

“(The change) wouldn’t leave Australia as vulnerable to shifts in US foreign policy and leadership,” he said.

But Fullilove said it was far too soon to tell what the final fallout would be to the Australia-US alliance, saying the relationship was larger than just Trump and Turnbull.

“(With Trump) if you overreact to every tweet you will exhaust yourself,” he said. “You’re better to squint your eyes and think what is the lasting damage and we don’t know the damage yet.”