Trump is right – more women should have voted 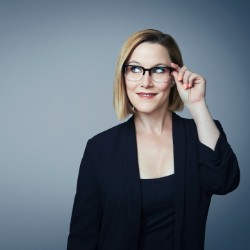 Democrats should note the enthusiasm and turnout for the women's marches

Marchers showed what was missing in Hillary Clinton's campaign

Editor’s Note: S.E. Cupp is the author of “Losing Our Religion: The Liberal Media’s Attack on Christianity,” co-author of “Why You’re Wrong About the Right” and a columnist at the New York Daily News. The opinions expressed in this commentary are hers.

As millions of women – and men – marched on Saturday to protest Donald Trump’s election, the new President himself was wondering what many others were: Where were these people on November 8, 2016?

“Watched protests yesterday but was under the impression that we just had an election! Why didn’t these people vote?” he tweeted.

Watched protests yesterday but was under the impression that we just had an election! Why didn't these people vote? Celebs hurt cause badly.

With protest turnout numbers in the millions, spread over cities around the country, one can appreciate the passion but has to seriously question both Hillary Clinton’s voter turnout efforts as well as the commitment of Trump opponents to defeat him.

For example, how many people who marched on Saturday didn’t vote, didn’t attend a single Clinton event or rally – or didn’t donate to any candidate? I know more than a few. I talked to two people who protested in the Washington march who admitted they wished they’d been more engaged in the election, but just never imagined Trump could win.

We don’t know who, exactly, turned out on Saturday to march, or for whom they voted, if anyone. But Trump was right about one thing: Not nearly enough women – white women in particular – showed up to vote for Clinton.

Trump won 53% of white women, compared to Clinton’s 43%. Moreover, 62% of white women without college degrees voted for Trump. According to Vox, “in the three states that decided the election – Wisconsin, Pennsylvania, and Michigan – that margin was enough to send Trump to the White House.”

Women and men from all over the country mobilized to get themselves to Saturday’s marches in big cities, far away. Many flew, drove or took trains to get there. Were there any registered voters from those three states who didn’t make it their local polling place on November 8? I’m betting quite a few.

That’s not to discount the power of peaceful protest, which Saturday largely saw. And if the Democratic Party is looking ahead to 2020 and how it can avoid serious and, in some cases, obvious mistakes it made in 2016, the marches hold some significant lessons.

Voters will turn out for causes, not just candidates. No one was running on Saturday. The next presidential election is four years away. And yet, there were millions rallying for a different direction (and a time machine, apparently). Giving voters a cause is just as important as giving them a candidate. Many women voted for Trump in spite of his many character flaws, because they believed the cause of change far outweighed the candidate’s own vices

Of course, candidates matter, too. Anyone with half a brain could see that Hillary Clinton was a problematic candidate. And yet, the Democratic National Committee had Hillary blinders on and didn’t seriously entertain other candidates such as Bernie Sanders. Imagine if the party had harnessed the kind of grassroots, organic energy that led to the women’s march instead of deciding on a candidate for the voters, ignoring her obvious flaws and then imagining voters wouldn’t care.

Women aren’t a monolith. The reason the women’s march attracted men and other groups who felt disenfranchised by the election of Donald Trump is the same reason many women voted for a guy who seemed anathema to so-called “women’s issues.” No voting bloc is a monolith. Women who pressured other women to vote for Clinton – from Madeleine Albright to Lena Dunham to Amy Schumer – assumed women would never vote for a Republican man, especially one like Trump. Guess again.

Listen to your people, not your party. If Republicans learned anything, it’s that the party can’t ignore the people. And yet, six of the seven candidates for DNC chair weren’t at any of the marches on Saturday. They were at an exclusive donor retreat at a Florida resort assembled by Clinton-backer David Brock to sell all the same strategies that didn’t get her elected in 2008 or 2016.

For a year the political class insisted that Trump rallies wouldn’t translate into votes. We were wrong. We were also wrong that Clinton’s small crowd sizes didn’t matter. Now, months after they failed to turn out enough voters for the election – in particular white women – Democrats will have to reverse-engineer the appeal that led to Saturday’s marches, and turn millions into voters.