"Many Republicans in the suburbs likes the idea of education choice as a concept, right up until it means that poor kids from the inner cities might invade their schools," DeVos said.

DeVos faced tough questioning from Democrats at her confirmation hearing on Tuesday.

Donald Trump’s education secretary nominee, Betsy DeVos, once criticized members of her own party for opposing school choice reforms, saying in a 2015 speech that many suburban Republicans do so out of fear that poor, minority students would enroll in their neighborhood schools.

DeVos made the comments at the South by Southwest education conference while speaking about the partisan gridlock that prevents the kind of education reforms she envisions.

At her contentious confirmation hearing Tuesday evening, DeVos faced tough questioning from Democrats about her views on charter schools and voucher programs, guns in schools, and accountability for for-profit schools.

In her 2015 speech, she introduced her comments by saying she was going to get “politically incorrect” in discussing the opposition.

“Many Republicans in the suburbs likes the idea of education choice as a concept, right up until it means that poor kids from the inner cities might invade their schools,” DeVos said, in a video of the speech reviewed by CNN’s KFile. “That’s when you’ll hear the sentiment ‘well, it’s not really a great idea to have poor minority kids come to our good suburban schools’ though they’ll never actually say those words aloud.”

DeVos expanded on her point by telling a story about a Michigan Republican legislator who opposed public school choice because his suburban district bordered the city of Detroit, which is urban and primarily black.

She also criticized Democrats for opposing school choice, though said the reason for their opposition was because of their loyalty to teachers unions.

DeVos did praise some politicians on both sides for their support of school choice and voucher programs, specifically naming Republicans John Boehner and Jeb Bush, as well as Democrats Cory Booker and Andrew Cuomo, for their support on the issue. 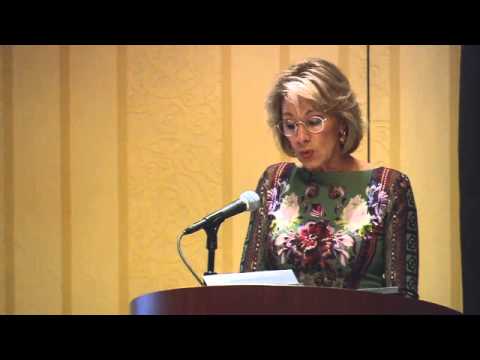