As Donald Trump takes over, a diminished ISIS awaits

ISIS' grip on territory in Iraq and Syria shrank by 23% in 2016, according IHS

It’s been almost 900 days since the US-led war on ISIS began. But as the Trump administration nears – with its promise to bomb “the s*** out of ISIS” – where does the campaign against the militant group stand?

One survey suggests ISIS lost nearly a quarter of its territory in Iraq and Syria last year alone, and more than a third since its peak.

Its finances have taken a hit, according to the US-led coalition and 180 “senior” leaders have been taken out by 17,000 airstrikes.

The group’s slickly produced, often gruesome, media output has been massively reduced, but, according to one analyst, it’s of higher quality than before.

ISIS is losing ground across its self-proclaimed caliphate, according to a new report.

Global intelligence and analysis firm IHS Conflict Monitor, which uses open-source intelligence including social media and on-the-ground sources, estimates that ISIS lost 17,600 square kilometers (6,800 square miles) of the land it held in Iraq and Syria over 2016. ISIS’ caliphate in the two countries shrunk by 23% over the course of the year, according to a survey and map released by IHS. The group lost 34% in the same region compared to January 2015.

In addition to ISIS’ de facto capital of Raqqa, the militant group retains patches of land not far from Homs and around the ancient city of Palmyra – control of which it regained from the Syrian regime late last year. It also has a presence in the countryside around the eastern city of Deir Ezzor.

IHS reported spikes in territory lost by ISIS when the US-backed Syrian Democratic Forces, or SDF, took control of the strategic city of Ash Shaddadi in March, moved on to Manbij in May, and in mid-October when Euphrates Shield, Turkey’s ground operation against ISIS in Syria, retook the symbolically significant town of Dabiq. 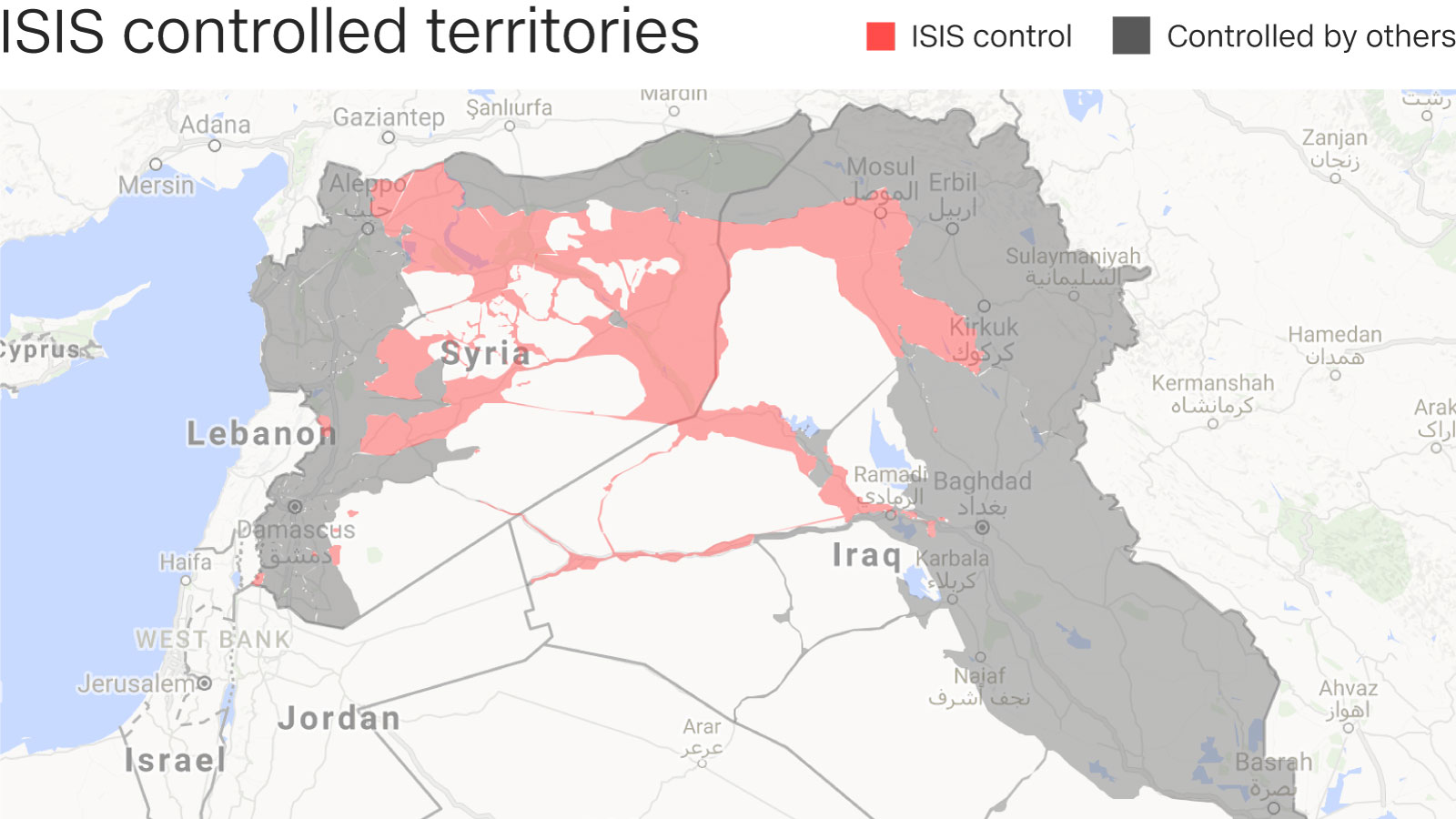 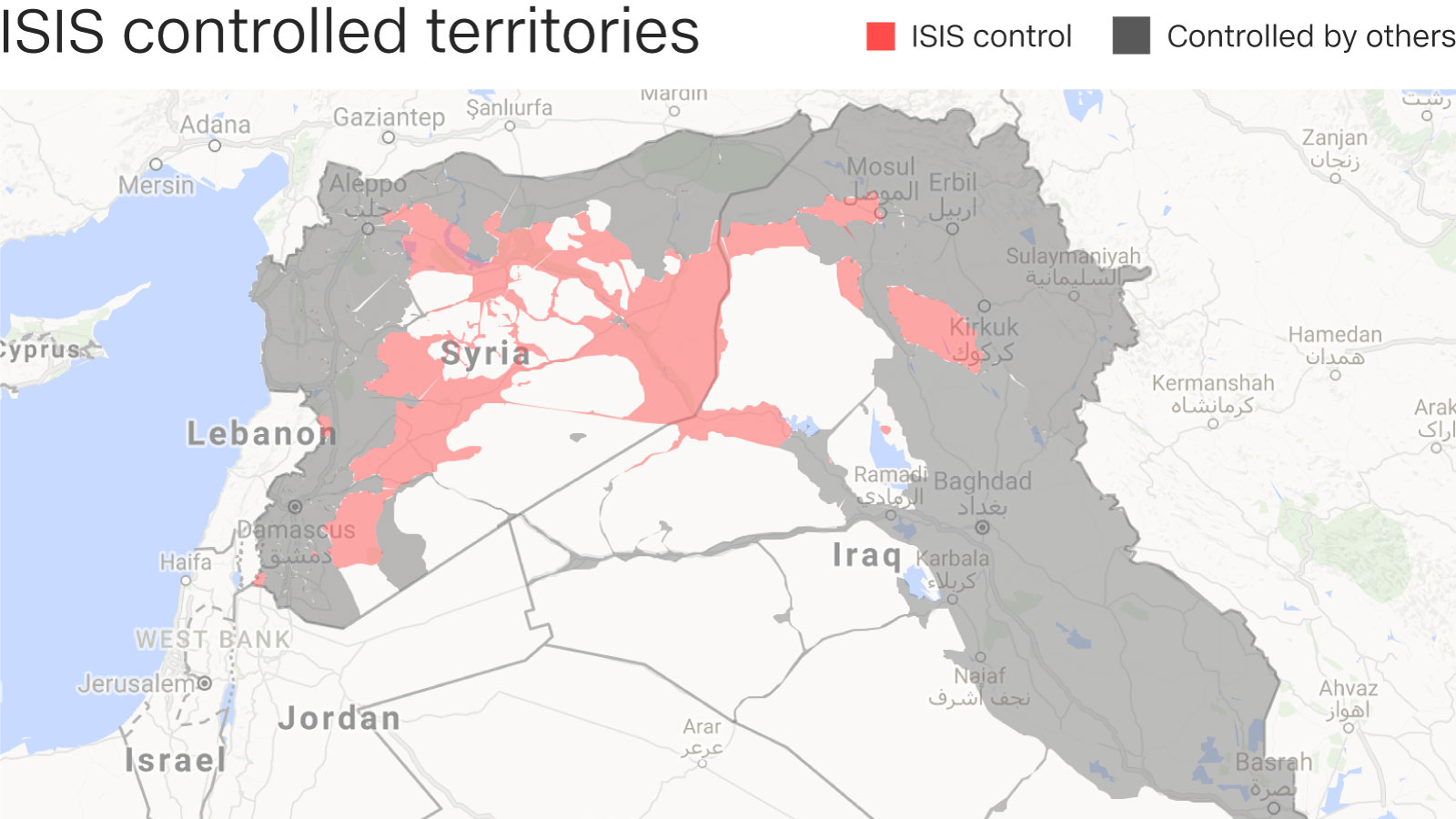 ISIS fights off advances on Mosul

ISIS’s presence has been felt in Samarra, and also recently in attacks in Baghdad.

But the group is mostly confined in urban centers to Mosul, where it’s on the cusp of losing the east bank of the city. That would leave it with just the west side, although some estimates suggest the battle for the group’s final stronghold in Iraq could continue to drag on into March.

MORE: Is bombing the s*** out of ISIS a strategy?

IHS points to a spike in territory lost by ISIS in May when Iraqi security forces kicked militants out of Rutba and western Anbar, and another in October when the operation to retake Mosul began.

MORE: What will it take to free Mosul from ISIS?

Beyond Iraq and Syria

Late last year, ISIS also lost control of Sirte, its final stronghold in Libya, but continued to retain perhaps hundreds of fighters in the country.

This could pose a threat to the already volatile security of Libya’s cities and also perhaps serve as a platform for plotting attacks in nearby Europe.

Meanwhile in Afghanistan, in the east of the country, an initial wave of US airstrikes backing an Afghan army campaign pushed the militant group back.

But ISIS has proven to be a resilient presence in a handful of provinces, attracting extremists alienated by the Taliban’s superannuated insurgency. The suicide bomber that killed dozens late last year at a Shia mosque in Kabul claimed affiliation with ISIS.

Finances have been hit hard

According to Dorrian, airstrikes against ISIS’ infrastructure and cash storage facilities have reduced the group’s revenue “or cost them anywhere from $4.5-6.5 million” per month.

ISIS’ loss of territory has also reduced the number of civilians it can tax, Dorrian said, and the 600 airstrikes against oil facilities and oil truck shipments hasn’t helped its finances either.

Pay to ISIS fighters has been disrupted as well as death benefits for suicide bombers.

Since declaring its caliphate in June 2014, the self-styled Islamic State has conducted or inspired more than 140 terrorist attacks in 29 countries other than Iraq and Syria.

Those attacks have killed at least 2,043 people and injured thousands more, according to a running CNN tally.

ISIS’ direct level of involvement in these attacks varies.

In September 2014, the CIA estimated that ISIS could muster up to 31,500 fighters across Iraq and Syria, whereas UK-based monitoring group Syrian Observatory for Human Rights put the figure at about three times higher.

These include local fighters and foreigners who have joined the group, which US officials said at one point numbered 20,000, from as many as 90 countries. As of last month, US officials were briefing that 75% of these fighters had been killed.

A study by the Combating Terrorism Center at West Point suggested an enormous drop in media output by ISIS – from a height of 761 visual media products a month in August 2015, to a low of 194 a year later.

“There’s no question that the number of video productivity has been crippled. What was a steady two or three a day is now one a week,” Charlie Winter, senior fellow at the International Centre for the Study of Radicalisation and Political Violence at King’s College London, who has studied ISIS propaganda for years, told CNN.

“Yet the quality is better than ever,” he added, saying the group was learning to tackle more complex themes and improving its storytelling.

Winter said the change in output could be explained by airstrikes and battlefield losses.

The group’s media chief, Abu Mohammed Al-Adnani, was killed in 2016, dealing another blow to the group along with the deaths of other, lower-ranking media operatives who account for much of the legwork.

He added that the rest is down to increased cyber warfare targeting the group.