Chemists have bad news about your cough syrup

Cough syrups perform no better than a placebo in many studies

They do have one known benefit: They can make you drowsy and help you sleep

No medicine cabinet is fully stocked without some good old cherry-flavored cough syrup – or at least that’s how it feels during cold and flu season.

But does that stuff even work?

This new video from the American Chemical Society (ACS) gives us the scoop. Spoiler alert: Not really.

In theory, antitussive drugs (like Dextromethorphan, often referred to as DM or DXM) block the body’s cough reflex. Other common cough syrup ingredients include expectorants that thin mucus and make it easier to cough; decongestants that open airways by narrowing blood vessels; and antihistamines that reduce swelling in the nose and throat. 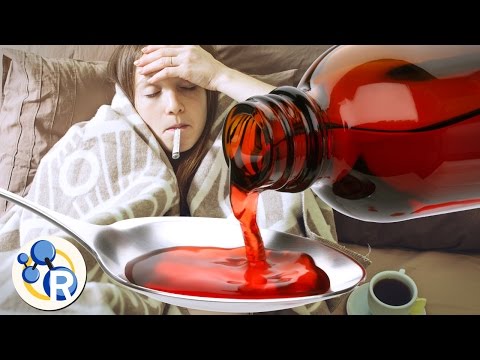 But despite all that, most studies on the topic have found no evidence that over-the-counter cold medicines actually suppress or stop coughing. In many cases, they’ve performed no better than a placebo.

“This is one of those more-research-is-needed type situations,” the video tells us.

14 Ways to Soothe a Sore Throat

So what does work? The ACS recommends drinking plenty of fluids, running a humidifier or taking a steamy shower, and sucking on cough drops – or just a hard candy – to get some relief. And some studies have suggested that drinking honey and/or lemon juice (in hot tea, for example, or in this homemade cough syrup) may help more than doing nothing at all.

Cough syrups do have one known benefit: They can make you drowsy and help you get to sleep, which is likely very much needed. (Cough syrup is not recommended for children under the age of four.) Just don’t take more than instructed because that can be seriously dangerous.

The video’s also full of interesting tidbits about why we cough in the first place, when to see a doctor, and what old-timey cough syrup used to be made of before modern-day medicine came along. Cannabis and chloroform, anyone?