Obama: 'We rise or fall as one'

His speech is the capstone of a months-long farewell tour

Watch CNN Films’ premiere of its documentary, “The End: Inside the Last Days of the Obama White House,” on January 18 at 9 p.m. ET on CNN.

Popular but politically humbled, President Barack Obama said goodbye to the nation Tuesday night, declaring during his farewell address that he hasn’t abandoned his vision of progressive change but warning that it now comes with a new set of caveats.

His voice at moments catching with emotion, Obama recounted a presidency that saw setbacks as well as successes. Admitting candidly that political discourse has soured under his watch, Obama demanded that Americans renew efforts at reconciliation.

“It falls to each of us to be those anxious, jealous guardians of our democracy,” the President said. “To embrace the joyous task we’ve been given to continually try to improve this great nation of ours.”

Obama also stressed solidarity despite a presidency sometimes at odds with Congress.

“Democracy does not require uniformity,” Obama said. “Our founders quarreled and compromised, and expected us to do the same. But they knew that democracy does require a basic sense of solidarity – the idea that for all our outward differences, we are all in this together; that we rise or fall as one.”

In a concession that, for now, his brand of progressive politics is stalled in Washington, Obama admitted “for every two steps forward, it often feels we take one step back.”

He implored his backers to be vigilant in protecting basic American values he warned could come under siege.

“Democracy can buckle when we give in to fear,” he said. “So just as we, as citizens, must remain vigilant against external aggression, we must guard against a weakening of the values that make us who we are.”

And he warned against turning inward, telling Democrats that only by involving themselves in a real political discourse could they hope to renew the hopeful vision he brought to the White House eight years ago.

“After eight years as your President, I still believe that,” he went on. “And it’s not just my belief. It’s the beating heart of our American idea – our bold experiment in self-government.”

Obama’s speech is the capstone of a months-long farewell tour, manifested in extended magazine interviews, lengthy television sit-downs, and the White House’s own efforts to document the President’s waning administration. Through it all, Obama has sought to highlight the achievements of his presidency using statistics showing the country better off now than eight years ago. 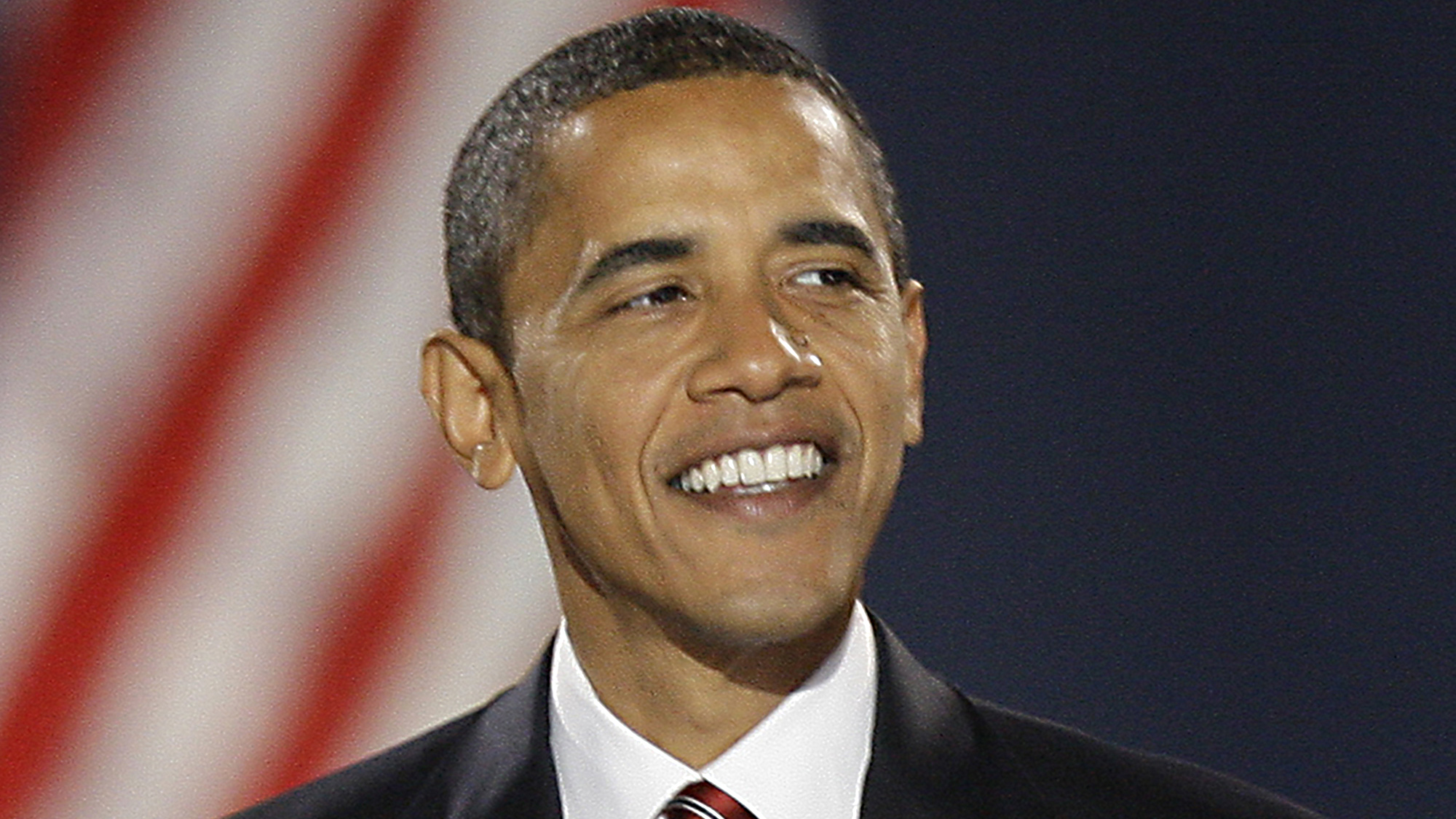 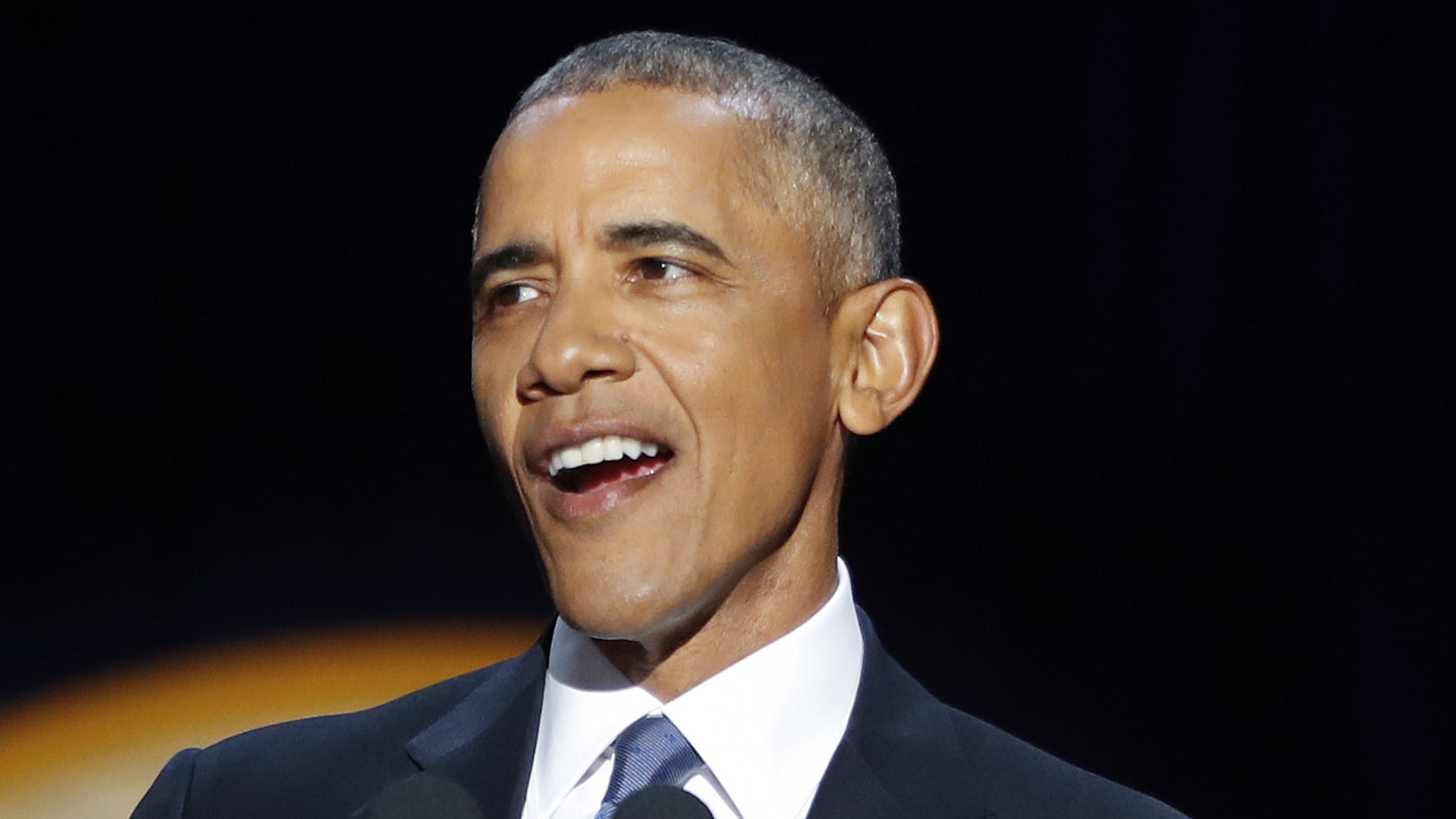 Compare photos of Barack Obama from 2008, when he gave his acceptance speech on Election Night, and 2017, when he delivered his farewell speech after two terms as President. Both took place in his hometown of Chicago.

As he spoke before a rowdy crowd of supporters, Obama was interrupted often with screams of “I Love you Obama.” When a protester holding a “Pardon All of Us” sign, chants of “four more years” drowned out the shouts.

Obama sought to corral his crowd, listing the accomplishments of the last eight years ranging from health care to marriage equality, all while insisting that his work isn’t finished.

He recognized his successor Donald Trump, saying he was committed to a peaceful transition of power. But he warned that going forward Democrats shouldn’t fall in line with their commander-in-chief.

Obama, who has addressed race with varying degrees of force during his time in office, used his farewell to insist Americans work harder to understand each other’s struggles. After presiding over eight years that saw race relations enter a fraught new era, Obama demanded that differences be identified and reconciled.

“Brown kids will represent a larger share of America’s workforce” in the years ahead, Obama proclaimed, calling for better rules that will help the children of immigrants succeed.

He warned that “laws alone won’t be enough” in resolving persistent differences between Americans.

“Hearts must change,” he said.

He called on African-Americans and minorities to view with empathy “the middle-aged white man who from the outside may seem like he’s got all the advantages, but who’s seen his world upended by economic, cultural, and technological change.”

With his wife Michelle and daughters Malia and Sasha by his side Democratic Presidential hopeful Senator Barack Obama speaks to voters during a rally at Roosevelt High School January 1, 2008 in Des Moines, Iowa.
Charles Ommanney/Getty Images
gallery

And he urged whites to regard the protests of minorities as a fight “not demanding special treatment, but the equal treatment our Founders promised.”

“Regardless of the station we occupy, we have to try harder,” Obama said. “To start with the premise that each of our fellow citizens loves this country just as much as we do; that they value hard work and family like we do; that their children are just as curious and hopeful and worthy of love as our own.”

In coming to Chicago, Obama hoped to capitalize on a well of goodwill that’s expanded in the final year of his tenure. He discarded the staid Oval Office or East Room for his last formal set of remarks, choosing instead the city where his political rise began and where he declared victory in 2008 and 2012.

Inside a vast convention hall packed with more than 20,000 of his most ardent supporters and former staffers, the mood was wistful. Ahead of his address, aides described the normally unsentimental commander in chief as nostalgic.

Over the past several weeks, Obama has offered a rational view of Trump’s election and rarely let on to any apprehension about his future as an ex-president. First lady Michelle Obama has articulated a more candid view in a scaled-back version of her own farewell. She sat for an hour-long interview with Oprah Winfrey, frankly admitting that Democrats were now “feeling what not having hope feels like.”

And she became emotional during her final set of formal remarks at the White House Friday, her voice quaking and eyes welling with tears as she told a crowd of educators: “I hope I made you proud.”

During his speech Tuesday, Obama voice quaked when describing his wife’s service.

“You took on a role you didn’t ask for and made it your own with grace and grit and style and good humor,” he said. “You made the White House a place that belongs to everybody.”

The President had been planning his speech for months, aides said, formulating the broad themes while on vacation over the holidays in Hawaii and developing drafts starting last week.

He told aides months ago that he preferred to deliver his farewell address in his hometown, a first for a departing President. George W. Bush, unpopular and facing a financial crisis, delivered his final prime-time address in the White House East Room to a crowd of 200 supporters and aides.

Bill Clinton, Ronald Reagan and Jimmy Carter all used the Oval Office – a setting Obama has long spurned for formal remarks. George H.W. Bush traveled outside of Washington to West Point for a departing address after failing to secure a second term, though he didn’t actually bill it as a farewell.

The tradition extends back to George Washington, who issued warnings against unchecked power and partisan entrenchment in a written address to the nation in 1796.

Like major addresses in the past, Obama wrote his speech himself, dictating passages to his chief speechwriter Cody Keenan who puts the President’s words into print. Obama returned the drafts with heavy annotations, writing his changes in a tightly compressed scrawl on the margins.

The President and Keenan went through at least four drafts of the farewell speech, an official told CNN Tuesday. The broad themes of the speech came together while the President was in Hawaii and he started reading a first draft on the long flight home last Sunday.

Aside from Keenan, several familiar names from the past were involved in the drafting, including former speechwriter Jon Favreau and former senior adviser David Axelrod.

When he returns to Washington in the early morning hours of Wednesday, it will be Obama’s 1,293rd – and final – flight aboard Air Force One. He’ll use the presidential aircraft on Inauguration Day to depart Washington. But with only a former president aboard, it’s known simply as a “Special Air Mission.”