Dr. Sanjay Gupta: Benefits of vaccines are a matter of fact 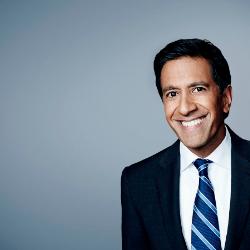 "The benefit of vaccines is not a matter of opinion," he writes. "It is a matter of fact"

Editor’s Note: Dr. Sanjay Gupta, a practicing neurosurgeon, is the multiple Emmy-award winning chief medical correspondent for CNN. The views expressed are his own.

A version of this essay originally published in 2015.

I have started, scratched out and even abandoned the writing of this essay. I couldn’t do it. It wasn’t there. Didn’t feel it.

Something kept nagging at me, and it took some time to finally figure out what it was.

It’s the idea that this article would be labeled “opinion” or “editorial” in the first place.

PHOTO: Evan Vucci/AP
President-elect Donald Trump gets on an elevator after speaking with reporters at Trump Tower in New York, Monday, January 9, 2017.

Sure, there are some topics that seem to lend themselves appropriately to opinion pages. Vaccines, however, which have prevented 6 million deaths every year worldwide and have fundamentally changed modern medicine, should not be on that list.

Studies, including a meta analysis of 1.2 million children in 2014, show no link between vaccines and autism. That is not a matter of opinion. It is a matter of fact.

That you are 100 times more likely to be struck by lightning than to have a serious allergic reaction to the vaccine that protects you against measles is not a matter of opinion. That is also a matter of fact.

PHOTO: AFP/AFP/AFP/Getty Images
A nurse prepares a shot of the A(H1N1) vaccine (Pandemrix from Glaxo Smith Kline -GSK- laboratory) to a hospital staff member in Istanbul, on November 2, 2009. Turkey began vaccinating medical workers Monday as the death toll from the A(H1N1) virus in the country reached six, the health ministry said. The latest victims of the disease were a 22-month-old baby and a 14-year-old boy who died overnight in the central city of Konya, a ministry statement said. Nine other people infected with swine flu were in serious condition in intensive care at the country's medical facilities, it added. AFP PHOTO / BULENT KILIC (Photo credit should read BULENT KILIC/AFP/Getty Images)

Related Article US mumps cases at highest level in 10 years

Facts should matter, and science should win, but after 13 years as a medical reporter, I know it is not that simple.

Science often loses the zeal argument to ideology, and in some ways, it is easy to understand why.

At the heart of the vaccine argument is the awesome challenge of trying to prove a negative.

If you or your child never gets the disease the vaccine was designed to prevent, there is no surprise. There is no headline. Life goes on.

The flip side, though, is the one-in-a-million child (literally, 1/1,000,000) who has a serious adverse reaction. It is likely to make the news, confirm the worst fears and lead to the enlistment of an army in the fight against vaccines.

PHOTO: Joe Raedle/Getty Images/file
MIAMI, FL - JUNE 02: Daniela Chavarriaga holds her daughter, Emma Chavarriaga, as pediatrician Jose Rosa-Olivares, M.D. administers a measles vaccination during a visit to the Miami Children's Hospital on June 02, 2014 in Miami, Florida. The Centers for Disease Control and Prevention last week announced that in the United States they are seeing the most measles cases in 20 years as they warned clinicians, parents and others to watch for and get vaccinated against the potentially deadly virus. (Photo by Joe Raedle/Getty Images)

It is worth pointing out that 12 out of 10,000 people who take an aspirin are at risk of intracerebral hemorrhage, or bleeding in the brain. People who regularly take too much acetaminophen are the largest group of people hospitalized for acute liver failure. And, on average, one person in the United States dies every year from H20 intoxication, or drinking too much water. And yet no armies have formed against aspirin, Tylenol or water.

David Katz, director of the Yale University Yale-Griffin Prevention Research Center, wrote that it makes no more sense to rant against vaccines because you heard of someone who might have had an adverse reaction than to stop walking because you heard about a pedestrian struck by a car.

In many ways, it is a luxury to be able to have this discussion at all.

Having spent time in West Africa covering the Ebola outbreak, I saw how people hoped, wished and prayed for a vaccine – to no avail.

On the other hand, the measles vaccine is readily available, and yet vaccination rates in certain areas of the United States are similar to the refugee camps I have visited in Haiti, Pakistan and Jordan.

PHOTO: Yann Libessart/MSF
Trials of the single-dose VSV-EBOV vaccine began March 23 in Conakry, Guinea. The World Health Organization has since announced that the vaccine is "highly effective" and could help prevent the spread of Ebola in the current and future outbreaks.

Yes, parents have a choice in this country.

It is a choice that so many others around the world will never have.

Of course I vaccinated my children. Didn’t think twice. Not a big fan of the measles or mumps or rubella – to name a few very preventable diseases.

And here is where I may lapse for a moment into opinion.

The anti-vaccination argument is often snugly wrapped in the “I love my kids” sentiment. And I find it, well, a little insulting.

To suggest that anyone who vaccinates their kids doesn’t love them is a whole new level of lunacy. But here is the fact of the matter, for me.