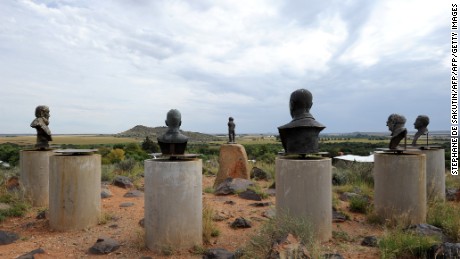 (CNN)Orania is not prime real estate by any stretch of the imagination.

The settlement west of the Orange River in Northern Cape, South Africa lies on arid and weather-beaten land; baked by the harsh summer sun and frigid through the dry winter. It's farmable, but not easy, requiring strong backs and callused hands.
Rising above the scrub the town's symbol flutters atop a flagpole, a young boy rolling up his sleeves, preparing to knuckle down and transform this landscape. It's a romanticized image for a romanticized notion: a place where Afrikaners can be Afrikaners. Tough, resourceful and making do; descendants of Dutch settlers and proud of it.
A remote farming town of approximately 1,300, Orania by this description is unremarkable. Except it is not. Instead, the community has gained a notoriety beyond its modest means as a parochial enclave within the Rainbow Nation, where the dream of an Afrikaner state is alive and well.
Orania, you might have guessed, is Afrikaner-only. And by extension, whites-only.
Read More
It's also growing.

Beginning life in 1990 during the last gasps of apartheid, the Afrikaner town was the brainchild of Carel Boshoff III. The son-in-law of H.F. Verwoerd, the architect of apartheid, he and a number of families purchased an abandoned workers' village with lofty ambitions that one day hundreds of thousands of Afrikaners might call it home.
Author Kajsa Norman
When Boshoff III died in 2011, his son Carel Jr. assumed presidency of the Orania Movement, the political arm of the community. Today he is their lead spokesperson and first line of defense -- a man whose job it is to intellectualize the argument for self-imposed segregation.
Boshoff IV, along with dozens of others, was interviewed by Swedish journalist and author Kajsa Norman while researching for her latest book "Bridge Over Blood River: The Rise and Fall of the Afrikaners." Norman spent two stretches in Orania.

Orania from the air, circa 2003. Since then its population has grown.


"When I first arrived in South Africa people didn't want to talk about Orania at all, didn't want to acknowledge that it existed," she tells CNN. "Many people were ashamed I think."
Orania's supporters are quick to point out that it exists within the parameters of the law. The post-apartheid government allowed for the concept of an Afrikaner state within the new constitution under freedom of self-determination on cultural and linguistic grounds.
Mpho Mogale, municipal manager and information officer of Thembelihle Local Municipality (in which the town is located), confirmed to CNN that "Orania exists legally," citing a 2000 Northern Cape High Court case adjourned "sine die" (without a further hearing date), when Orania fought incorporation into its newly demarked municipality.

Nelson Mandela, guest in Orania in 1995, is introduced to citizens by founder Carel Boshoff III (back to camera).


The town is built on private land owned by the Orania Company, with shares held by homeowners. As such, the community is able to maintain more control over who is permitted into the collective.
Nelson Mandela visited in 1995, Norman writing that Orania's residents "greeted him politely and said they'd love to see him as president... of a neighboring country." Jacob Zuma made the journey in more recent years, Orania Company CEO Frans de Klerk telling the author the current president "identifies very strongly with [his] Zulu culture" and seemed "to better understand the desire of a people to remain a people and preserve their culture."
They made for curious guests no doubt, but no more than that. Permanent residents are screened by committee, applications pored over to weed out pretenders to their cause.
"'Could a person of color, who speaks Afrikaans, embraces the Afrikaner culture and is married to an Afrikaner, become a resident?'" Norman asks Boshoff in one of their interviews. "'It is not theoretically impossible, but it would be very difficult,'" he replies.
CNN asked Boshoff to elaborate via email.
Carel Boshoff IV, president of the Orania Movement.
"If someone who is obviously not a typical Afrikaner -- a 'colored' for example -- would wish to live in Orania, he/she would be noticed and would be reacted upon accordingly, in other words be asked if and how he/she would assimilate with the community," he writes, adding that such questions "would probably offend" and "not make for easy relationships."
"It's only honest to concede that it [would] confront us with practical difficulties," he continues. It's perhaps why, he concedes, Orania does "not depart from a racial basis" when defining culture -- and implicitly, when selecting its residents, despite there being "no rule to forbid [the] scenario."


So not impossible for a person of color, but highly improbable -- and without any desire to be facilitated by local leaders.
"Essentially they've given themselves their own Bantustan," says Norman, describing an apartheid-era policy in which the white-dominated government allotted territories to South Africa's various indigenous peoples as pseudo-national homelands.
"It's disappointing," says Mogale on Orania's self-imposed isolation, "but because it is the decision of the High Court that it should be allowed to be on [its] own, there's absolutely nothing we can do about it."

Standing at a crossroads

Norman says the key questions in her study were "How do you persuade a people that they're superior to others? And what happens when that illusion is shattered?"
Deconstructing the effects of policy change in the post-apartheid years, Norman crosses the country speaking to Afrikaners choosing either to redefine or consolidate their identity. She makes it clear in our interview that she was out to validate no one.
Among her conclusions, she tells CNN: "Afrikaners who have become the most successful in South Africa today have given up their Afrikaner identity and become South Africans first and foremost."
The disavowal for some is extreme. One interviewee says learning the Afrikaans language is "a waste of gray matter."