Here’s how to tackle cyberbullying

The stories capture our attention and break our hearts every time. The most recent case: An 18-year-old girl in Texas who took her own life in front of her family after she was repeatedly bullied about her weight.

After every one of these tragedies, many people ask, “How can we prevent this from happening? What can be done to tackle cyberbullying?”

It is an issue that Melania Trump, who will soon become first lady of the United States, has said she wants to focus on during her husband’s administration. In a speech shortly before the presidential election, she said she would work to improve a social media culture that has gotten “too mean and too tough.”

If Trump truly wants to change the online culture of meanness and try to combat cyberbullying, what could she do?

I reached out to a range of experts in the digital space, many of whom spoke at a recent national summit on digital citizenship hosted by Twitter that I attended.

They all agree that Trump will have a powerful bully pulpit. If she uses it and uses it effectively, she could help give more students the tools they need to enjoy healthy and positive lives online.

One of the main things the future first lady could do is put a spotlight on the need for better training for children on what it means to actually stand up to cyberbullying, said Carrie Goldman, an award-winning author and anti-bullying educator.

“There’s this misconception (that) if somebody attacks you, then all of the people who are supporting you respond by attacking your attacker, but that just perpetuates the cycle of cyberbullying,” said Goldman, author of “Bullied: What Every Parent Needs to Know About Ending the Cycle of Fear.”

If somebody sends out a hateful Tweet or an Instagram post about somebody a tween or teen knows, they might think they are standing up to the bully by retweeting the post and criticizing it with comments such as “Isn’t this awful.” But that just gives the bully the attention he or she might be seeking and expands the pain and hate.

Instead, Goldman said, we need to teach kids to post affirming messages on the wall of the target, such as “I believe in you” and “I care about you.”

He and his colleagues give presentations to schools across the country and let students know that if they see anything troubling online, they can call attention to the problem and get help by using the #ICanHelp hashtag or through a direct message to the company.

“When we’re in a constant state of fear, people tend to seclude themselves, or they’re afraid to act,” said Soeth, a former high school English teacher. They think, “Well, if if I stand up for this person, then I’m going to get into trouble, too” or “I don’t want to get in trouble. I’m not going to tell anyone.”

But if young people know there are steps they can take without fear of retribution, they may be more inclined to speak up and report it, and stand up and support each other.

“Once kids start tagging and using the hashtag, then they kind of piggyback on each other. It’s like a bat signal,” he said.

Schools need to be educated too, he said. He co-created a national help line, iCanHelpline, being piloted this year, that provides advice to schools on digital issues impacting students. Shortly after the help line went into effect, Soeth and his colleagues heard from a school that was having a problem with a social media network.

“I asked, ‘Hey, how long has this page been up?’ and they said, ‘Two months,’ and I was like, ‘Really? Why so long?’ Their reply? ‘Well, we really didn’t know we could do anything about it,’ so there’s a huge education component.”

The power of the positive

Another thing Trump could do, experts say, is call attention to the positive things students are doing online.

Seventy percent of bystanders who observed harassment either online or in-person tried to make the victim feel better, according to a 2015 study (PDF) by the Crimes Against Children Research Center at the University of New Hampshire.

“The vast majority of kids want to help,” said journalist and youth advocate Anne Collier, who founded the iCanHelpLine.

“We don’t see that in the news much. We don’t see that celebrated, much less reported, so that’s, I think, the best place to start is, let’s tell the truth about what’s going on,” said Collier, executive director of a national nonprofit, The Net Safety Collaborative, which provides support to school communities on digital, physical and social-emotional safety.

Among the numerous examples: Two students at William B. Bristow Middle School in Brentwood, California, were tired of negativity on campus, so they started an anonymous compliments page on Instagram, said Soeth, whose #ICanHelp showcased the project on its website. 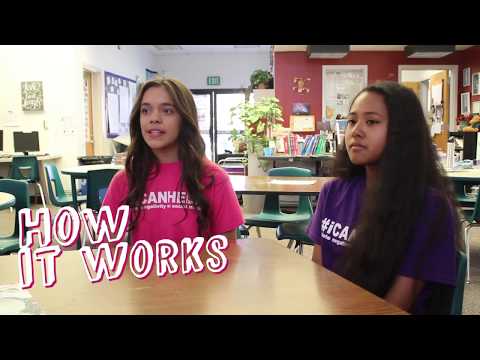 The two middle-schoolers started complimenting random people on campus. Soon, they were getting submissions from people naming other people to be complimented, so they started a special “Compliment for a friend” on Fridays.

You’ll find posts such as “You are super sweet! You are such a fun person to be around,” “You’re hilarious” and “I like your hair.”

Swastikas and the words "Go Trump" were painted on playground equipment at Adam Yauch Park in Brooklyn, the NYPD says.
Marissa Alperin

The students have since graduated and turned the project over to current students at the school. So far, the page has had over 1,000 posts, boosting the self-esteem of the kids receiving the public compliments.

“When I got complimented on the page, it actually gave me a lot of confidence, so now when I’m presenting in front of class or in a group, I have volume and eye contact,” one student said in a video posted on YouTube.

“It just became this great model,” said Soeth. “This is another piece, I think, that some schools are missing is, here’s this positive outlet online, showing what kids can do, engaging students, and just by following something that’s positive, generally their outlook, their demeanor and the types of accounts they choose to follow and who they choose to interact with will be much improved.”

“If people only see stories about the negatives, it’s very easy for them to have the feeling that everything is awful, everything is terrible,” she said. “We have found that if we go into schools and we show students that most of their online activities are either neutral or even kind, then we influence them to continue to be that way. It’s almost like creating the environment and then making a self-fulfilling prophecy about it.”

The importance of social-emotional learning

Any expert on bullying will say that you can’t look at it in isolation. You have to think about what led to the bullying behavior, and often, it is a lack of empathy on the part of children.

Consider the stats: College freshmen today are 40% less empathetic than they were 30 years ago, according to research by the University of Michigan, which analyzed empathy among almost 14,000 college students.

Part of the problem is technology, educational psychologist Michele Borba told me a few months ago.

Children “are more and more plugged in, and you don’t learn empathy facing a screen, and right now, you’re encouraged to learn feelings by circling emojis, and that ain’t going to cut it,” said Borba, whose newest book is “Unselfie: Why Empathetic Kids Succeed in Our All-About-Me World.”

Many people, including teens, may find speaking up about depression difficult due to lack of awareness.
Photo Illustration/Thinkstock

This might be why depression is rising among teen girls

More schools seem to be getting that message, with an increase in social-emotional programs across the country. (My children’s school started a program just this year.)

“If you look at the schools that are approaching behavior first by helping kids learn to recognize and regulate their emotions, that will help them change behavior,” said Goldman, author of “Bullied.”

If a child can recognize how he or she would feel if they were on the receiving end of hate, then that understanding and mindfulness might lead to empathy and refraining from posting something cruel about another person, she said.

More emotional intelligence can also help children protect themselves from becoming a target.

“A kid who is emotionally intelligent will be able to say, ‘Gosh, every time I’m on Instagram, I don’t feel good. I walk away from it feeling sadder or insecure, like I’m missing out on everything, so I guess I’m just going to spend less time on Instagram,’ ” Goldman said. “The kids who have that emotional intelligence are able to use that awareness of how they feel to take behavioral steps that are more protective.”

The need for ‘cyber civics’

He pointed to “cyber civics” classes, such as the curriculum being taught to middle schoolers in California by CyberWise, a digital medial literacy platform for tweens, teens, parents and educators.

“We’re not teaching about the realities of social media education,” said Katzman, who regularly meets with students. “Students don’t know that everything they put out there is discoverable. … They’re shocked when I tell them anyone in the world who wants to find anything you’ve posted can.”

10 things we know about bullying

If more young people were aware of this, he believes, there would be a reduction in the cruelty we see on social media.

Young people might think that they are hidden behind a wall of anonymity and that, when they send a mean post, nobody will ever know they sent it, he said.

“I believe if we teach the essentials, I think students will self-regulate themselves with that knowledge, and I think you would see this going down, because nobody wants to get caught.”

We need to empower our kids with the knowledge about social media platforms and what the ground rules are, he said.

“They don’t come with user manuals, and they should,” he said.

What Trump can also do is bring her personal story to the conversation, experts say. She has been slut-shamed online and has been the target of hate, said Goldman, the anti-bullying educator.

“If she is able to speak out and share her personal voice, that is the most powerful thing of all,” she said. “If she could say it hurts to have people say things that are unkind, she could help influence other kids to use their voice and say, ‘This isn’t OK. This stuff is hurtful. Let’s not do this.’ “

But to truly have credibility on the issue, she has to call out hateful language online “where she sees it,” even if that includes supporters of her husband’s presidency and her husband himself, who has repeatedly taken to Twitter to make derogatory comments about individuals and groups of people, said Goldman.

What do you think Melania Trump could could do to tackle cyberbullying? Share your thoughts with Kelly Wallace on Twitter @kellywallacetv.