Gambians cast votes with marbles instead of ballots

Marble system praised for being "more transparent, credible, and fair

However Internet and phone lines were blocked on eve of election

Gambians headed to the polls Thursday to cast their vote for the next president, not with a ballot but with a unique marbles and drums system.

The country’s electoral body praised the saying it was “more transparent, credible, and fair,” allowing the country’s illiterate citizens to vote.

“Our electoral commission is second to none,” said Gambia’s Independent Electoral Commission Chairman Alieu Momarr Njai in a press conference days before the election. “No one can rig it,” he added.

Gambia ready to vote - with marbles 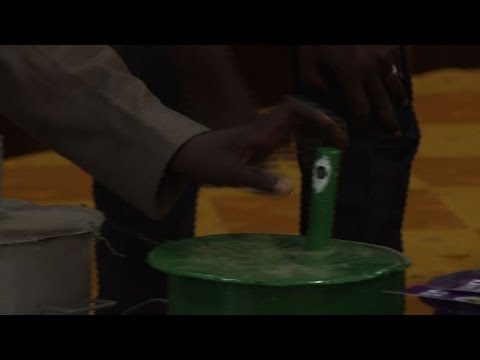 The process was developed 60 years ago and each registered voter is given a single marble, which they place in drums that serve as a ballot box, each drum has a photo corresponding to a presidential candidate.

After the voting has ended, the drums are emptied and marbles are placed into special trays (with either 200 or 500 holes), this system enables counting officials to quickly see the number of votes cast in each drum.

The incumbent President Yahya Jammeh has been in power for 22 years and is vying for his fifth term in office but he faces his largest opponent yet in opposition candidate Adama Barrow.

Describing the unique voting system Fatou Jagne, of media freedom organization Article 19’s, said: “It’s quite simple and very basic and it costs less than a new system…it is quite reliable.”

The run-up to elections, however, have faced severe international criticism, with the government accused of voter intimidation and opposition suppression.

On the eve of the election internet and phone lines were blocked and remained so as polls opened on Thursday.

In October, Human Rights Watch condemned the arrested of more than 90 opposition protesters, including the leader of Gambia’s largest opposition party, the United Democratic Party (UDP).

In April, the UDP’s national organizing secretary was beaten to death while in custody of security services, according to a Human Rights Watch report.

Today at least 43 people remain in custody, according to Article 19.

President Yahya Jammeh seized power in a military coup in 1994 and has been in power since in what international observers often call a repressive regime.

He has attracted heavy criticism in the past for claiming that he had created a herbal remedy for AIDS. He also once threatened to behead gay people.

The small West African nation is the fourth-largest source of migrants arriving in Italy despite having a population of fewer than 2 million people.