"This Sharia law business, what's happening right here in the state of Texas is unbelievable," Flynn said in

Fact-checking websites, including PolitiFact and Snopes, have labeled claims about Sharia law coming to the U.S. false.

Fact-checking websites, including PolitiFact and Snopes, have labeled claims about Sharia law coming to the U.S. false. In 2015, the Houston Chronicle dubbed “rumors about Sharia courts” their hoax of the year.

CNN’s KFile first reported Tuesday that in a speech in August, Flynn falsely claimed that Florida Democrats voted to impose Islamic Shariah law at the state and local level. PolitiFact, which fact checked the general claim about the Florida Democrats as “pants on fire” false back in 2014, called Flynn’s specific claim “wildly wrong” in a story published after CNN’s report.

Shariah is a set of moral and religious principles that guide the life of Muslims.

A CNN KFile review reveals Flynn warned of the threat of Sharia law in multiple speeches this year. Flynn didn’t respond to an email seeking comment.

“This Sharia law business, what’s happening right here in the state of Texas is unbelievable,” Flynn said, speaking to an ACT! for America gathering in San Antonio, Texas. ACT! for America, of which Flynn serves on the board, is one of the leading organizations that pushes state laws banning Sharia law and describes itself as the “collective voice for the democratic values of Western Civilization, and against the threat of radical Islam.”

“I try to study a little bit about where I’m going to go to talk, what’s happening here, you guys have some serious issues,” Flynn continued. “You got some serious issues – I studied Florida a little bit, because I was down last Wednesday in Florida where a couple of these campaign events and what struck me was, Florida has 36 state senators. 12 of them are Democrats. 12 of those senators are Democrats and the other whatever it is 24, I guess, or 14, are Republicans. So, all 12 Democrats voted to have Sharia law as part of the state judicial system in the state of Florida. You got that going on in this state right here. You have that going on in this state right here. It’s over 100 cases around the country.”

Flynn went even further in a speech to ACT! in Dallas, saying it was happening all over the country.

“I want people to understand that there are different laws that are not our laws that others try to impose when they’re trying to protect somebody,” Flynn said. “Like it’s going on right now in the state of Texas…in your state, in many other states around this country, at the state level, at the local level and the state level; because you can’t do it at the federal level just yet because we don’t have the Supreme Court in place that would provide the top cover.”

“When you, in the state of Texas, you, in the state of Texas—your legislators, your state representatives, your state senators, there’s a bunch of them that would be willing to have Sharia law imposed in the state of Texas,” Flynn continued. “Listening to the Irving mayor, I mean, she said something to me today that I had not heard anybody say, but it does not surprise me that the movement that does exist—okay, you hear about CAIR, the Muslim Brotherhood, and all these different organizations—the movement that does exist, they go out to cities and they look for the mayors to co-opt. So thank God they couldn’t co-opt her. I mean, she’s as tough as nails. She’s as tough as nails.” 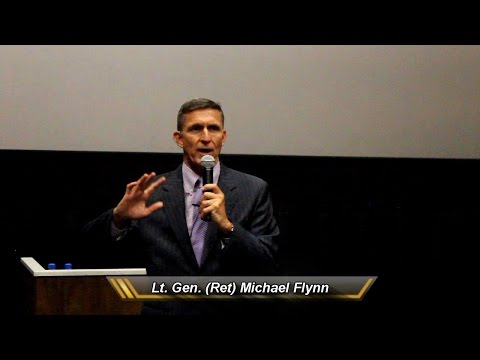