Michael Flynn in August: Islamism a ‘vicious cancer’ in body of all Muslims that ‘has to be excised’

Flynn: "This is Islamism, it is a vicious cancer inside the body of 1.7 billion people on this planet and it has to be excised."

In the same speech, Flynn falsely claimed that Florida Democrats voted to impose Islamic shariah law at the state and local level.

Donald Trump’s pick to be national security adviser, retired Lt. Gen. Michael Flynn, called Islamism a “vicious cancer inside the body of 1.7 billion people” that has to be “excised” during an August speech.

Flynn, who has called Islam as a whole a “cancer” in the past, made the comments during a speech to the Ahavath Torah Congregation in Stoughton, Massachusetts. Video of his speech is available on YouTube and was reviewed by CNN’s KFile.

“We are facing another ‘ism,’ just like we faced Nazism, and fascism, and imperialism and communism,” Flynn said. “This is Islamism, it is a vicious cancer inside the body of 1.7 billion people on this planet and it has to be excised.”

In the same speech, Flynn falsely claimed that Florida Democrats voted to impose Islamic shariah law at the state and local level. The claim, peddled by far-right blogs in 2014, was rated “pants on fire” by the independent fact-checking organization PolitiFact, which explained that the bill in question was about prohibiting judges from using foreign law in family law cases if the law conflicted with existing U.S. policy. Democrats voted against the bill, saying it was unnecessary and targeted Muslims in the state.

“Look up something called ‘the American laws for American courts,’” Flynn said. “I don’t know if it’s happening up here in Massachusetts, it’s happening in other states. I have had people in the media, mainstream media, say, ‘oh, that’s all a conspiracy, it’s a lie.’”

Flynn didn’t respond to a comment request for this story. CNN’s KFile reported last week Flynn shared fake news and interacted with figures of the so-called alt-right on Twitter. On Monday, CNN’s KFile reported Flynn said “who knows” when asked about a conspiracy about the 2013 sarin gas attack in Syria being a “false flag.”

In the speech, Flynn fielded a question asking if President Obama was a Muslim.

“Okay let me repeat the question,” Flynn said. “Is Obama doing this intentionally or is he incompetent and is he a Muslim? This is where I say we’re to blame. We. We. You, me, are to blame. All you have to do, and most people don’t do these things, I do because it’s part of who I am, all you got to do is read what he’s written and listen to what he says. It’s that simple.”

“Well before he became president of the United States the first time, he said what he was going to do,” Flynn added. “He said it. The second time – fool me once, shame on me. Fool me twice, shame on you. I mean what happened? The second time he comes in – honestly, the first time I was kind of hopeful. Maybe we’re enlightened. This country, this is going to be a good guy. He says all these things. I’m listening to what he’s saying. I’m like, ‘wow. This is different. This is different.’

“This is an individual who has an ideology ,and he has apologized for all the ill will of the United States of America over our history, for who we have been. He has. The apology tour. His speech in Cairo was unbelievable. I’m sitting there and I’m listening to it because I was deployed at that time and we were watching what our president’s saying because it’s going to cause some impact, and boy did it cause some impact. It caused the Muslim world to blow up.” 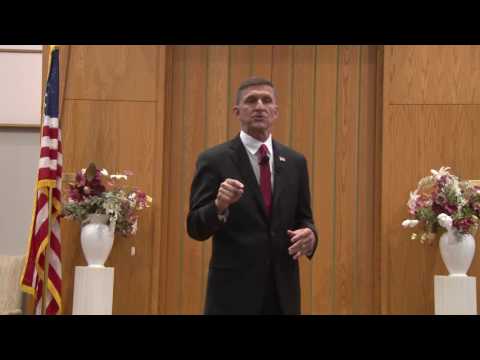