New York Gov. Andrew Cuomo calls prejudice a "social poison [in] the fabric of our nation"

An “explosion” in hate crimes since Election Day has prompted the creation of a special police unit to fight the uptick in New York, Gov. Andrew Cuomo said Sunday.

The announcement coincided with an address at Harlem’s Abyssinian Baptist Church, where Cuomo called for an end to the divisiveness that has gripped the country.

“The ugly political discourse of the election did not end on Election Day. In many ways it has gotten worse, [turning] into a social crisis that now challenges our identity as a state and as a nation and our people,” he said.

President-elect Donald Trump wasn’t specifically mentioned in his church address, but Cuomo has in the past criticized Trump and vowed in a New York Daily News op-ed that he would “reject the hateful attitudes that pervaded throughout the 2016 campaign.” 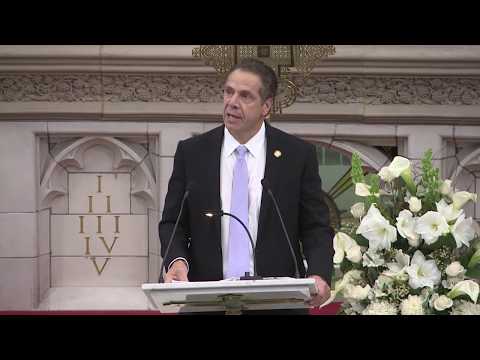 The Southern Poverty Law Center has counted more than 700 incidents of hateful harassment and intimidation since the election.

A toll-free hot line that Cuomo launched on November 15 to connect New Yorkers with the state Division of Human Rights to report incidents of bias and discrimination has received more than 400 calls since Friday, according to Cuomo’s office.

Calling this kind of prejudice a “social poison [in] the fabric of our nation,” the governor cited a number of recent incidents, including a scourge of swastika graffiti and the case of black freshmen at the University of Pennsylvania being sent pictures of lynchings and racial slurs.

Cuomo also vowed to set up a legal defense fund for immigrants who fear prosecution under a Trump administration. He said the fund would be the first of its kind.

The plan, he said, would be to set up a public-private partnership “to provide immigrants who can’t afford their own defense the legal assistance they need … because in New York, we believe in justice for all,” Cuomo said.

He added, “If there is a move to deport immigrants then I say start with me. I am a son of immigrants. Son of Mario Cuomo, who is the son of Andrea Cuomo, a poor Italian immigrant who came to this country without a job, without money, or resources and he was here only for the promise of America.”

Cuomo’s plans also include the expansion of New York’s Human Rights Law to protect students who are bullied or discriminated against.

We don't care the color of your skin or how much money you have in your pocket - if you accept the American ideal, we will work with you.

“I have no scientific evidence as to why, but you’ve been paying attention to what’s been going on in the country over the last year or so and the rhetoric has increased, and I think that might have something to do with it,” O’Neill added.

Cuomo said on Sunday that New York’s tolerance will lead the way for the rest of the nation, and his announcement came as an “anti-hate” rally was held in a Brooklyn park vandalized with swastikas and pro-Trump graffiti.

Swastikas and the words "Go Trump" were painted on playground equipment at Adam Yauch Park in Brooklyn, the NYPD says.
Marissa Alperin

The rally, at a playground named after the late Beastie Boy Adam Yauch, was attended by band member Adam Horovitz, better known as Ad-Rock.

“Keep your eyes open, stand up for each other. This is homegrown terrorism for real,” Horovitz told the crowd. “I reject Donald Trump’s vision for America. New York City, I’m asking you to do the same.”