As the shape of President-elect Donald Trump’s new administration comes into focus, environmental activists and organizations who had found an ally in the Obama White House are preparing for a fight to protect their gains of the past eight years.

Trump’s ascendance is threatening not to simply undo a series of already tenuous international agreements, but give a boost to interests opposed to fossil fuel regulation, while amplifying voices who express doubt – or outright deny – that climate change is real. It is. Scientists agree people are causing climate change primarily by burning fossil fuels, and the longterm consequences are expected to be disastrous.”

“The disaster that Donald Trump represents for the climate cannot be understated,” Jamie Henn, a spokesman for 350.org, a leading environmental action group, told CNN on Tuesday. “He is the only head of state in the world who is an all-out climate denier and he has the most radical, anti-environmental policies of anyone to ever assume the role of the presidency.”

Here are the four centers of concern – right now:

The Paris Climate Agreement became international law November 4, days before Trump scored his upset defeat of Hillary Clinton. But the non-binding deal is still very much a work in progress. Negotiators are gathered now in Marrakech, Morocco, in an effort to implement its historic framework.

While the Trump administration does not have the authority to “cancel” the international pact, as the now President-elect pledged during the campaign, it is reportedly looking for ways out and could, because individual countries set their own standards, effectively remove the US from the process.

“If one party decides to withdraw that it doesn’t call the agreement into question,” Moroccan foreign minister Salaheddine Mezouar said at a news conference last weekend in an effort to downplay the new administration’s potential action – or inaction.

But a US reversal would likely also cause other major carbon emitting nations, like China or India, to at least slow their own efforts.

The keystone of the US plan to meet its Paris accord commitments is currently tied up in federal courts, with the Environmental Protection Agency fighting a legal challenge from nearly two dozen states, the Chamber of Commerce and coal-mining companies.

During the campaign, Trump framed the “Clean Power Plan,” which promises a nearly 32% reduction in domestic greenhouse emissions by 2030, as a job-killer he would be quick to scuttle.

“This Obama-Clinton directive will shut down most, if not all, coal-powered electricity plants in America,” Trump said during a September speech. “They’re shutting down all over the country.”

The crux of the plan, though, should it survive the court challenge, relies on the authority and willingness of the EPA to carry out its mandate. Trump could easily decline that and seek to roll it back during his term.

Trump’s decision to install Myron Ebell as the head of his EPA transition team sent shivers through the activist community.

Ebell, though not a scientist, has emerged as one of the world’s foremost climate deniers. As the Paris pact entered its final (and successful) stage of negotiations at an international conference in December 2015, his face was one of seven pasted, mug shot-style, outside hotels in the French capital. 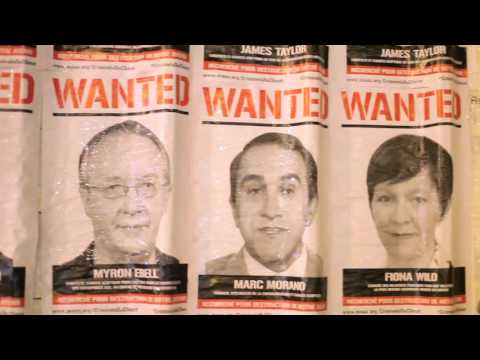 A few months before that, he wrote in a blog post that Obama’s “Clean Power Plan” was “illegal” and lamented the gains likely to be incurred by “renewable energy producers” at the expense of coal and natural gas.

Now the man activists call a “climate criminal,” and who has said that climate change is “phony” and a bogus “pretext for expanding government,” has been given the power to staff the federal agency most often tasked with monitoring and enforcing actions to slow or reverse it.

4. Trump himself is a climate denier

The issue came up because Hillary Clinton had, the night before, said that her opponent “thinks that climate change is a hoax perpetrated by the Chinese.”

Trump made the claim on Twitter in 2012, almost four years to the day he was elected, writing, “The concept of global warming was created by and for the Chinese in order to make U.S. manufacturing non-competitive.”

It is a thread he has kept up for years, often through skeptical tweets.

“It’s late in July and it is really cold outside in New York,” he wrote in July 2014. “Where the hell is GLOBAL WARMING??? We need some fast! It’s now CLIMATE CHANGE.”

And on a cold January evening in 2015, he asked, “Where the hell is global warming when you need it?”

Trump has said he was “joking” about the Chinese conspiracy theory, but in multiple public statements has framed policies designed to combat climate change as a threat to American industry.

“I am not a believer in climate change,” he told CNN in September 2015. “You have rain, and you have beautiful days. But I do not believe that we should imperil the companies within our country.”