Mormon and gay: Church says you can be both

LDS Church has launched a new section of its official website, titled "Mormon and Gay"

Self-identified gay Mormon: The church's shift on this issue is "monumental"

Ricardo Rosas was the closeted father of six before he came out to his wife – and, on Tuesday, to the rest of the world.

A third-generation Mormon from Mexico City, Rosas went to church, served a mission and “did everything that was expected” of him.

Still, Rosas, 47, said he felt conflicted and didn’t truly understand what was going on.

“For 40 years,” Rosas said, “I carried the shame of those feelings… for most of my life I felt very broken.”

It wasn’t until Rosas started a new job that he discovered the resources he needed in an unlikely place: the headquarters of the Church of Jesus Christ of Latter-day Saints, as the Mormon Church is officially known, in Salt Lake City.

As a creative director for church public affairs, Rosas was asked to help design the church’s latest campaign: a new section of its official website titled “Mormon and Gay.”

As the office’s attention fixed upon homosexuality, Rosas scrutinized himself. Eventually, he was able to share his sexuality with a colleague who also identified as “same-sex attracted.”

“It was liberating,” Rosas said.

Rosas said he realized he could be “same-sex attracted,” married and Mormon. Now he and his wife Elizabeth are featured prominently on “Mormon and Gay,” discussing how they have grown together as the new materials gave them the tools for “a healthy dialogue.”

Elizabeth’s Take on Love and Understanding 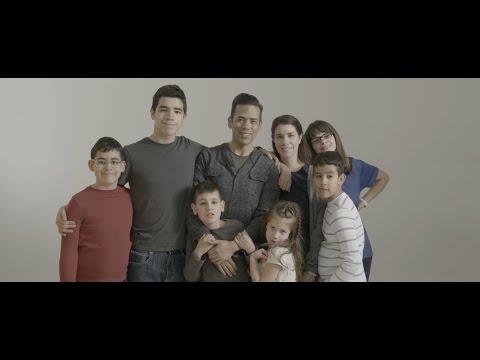 No issue in the last decade has divided churches as deeply as homosexuality. As public opinion – and scientific understanding – on sexuality has shifted with remarkable speed, many denominations, including Mormon leaders, have had to grapple with a difficult question: How do they maintain traditional doctrine that homosexual acts are sinful, while accepting and ministering to gay and lesbian Mormons who sincerely wish to remain part of their church?

Unveiled on Tuesday, “Mormon and Gay” is one answer to that question.

The web page features video messages and essays from five church members, including Rosas, who identify as same-sex attracted, gay, lesbian or bisexual. The materials are intended to facilitate empathetic understanding and provide information on sexual identification, church doctrine and mental health resources.

Mitch Mayne, a prominent gay Mormon and blogger, said, “Above and beyond getting into the content of the website, the URL is absolutely fantastic – it’s an inclusive statement.”

Beyond the title, the update presents a marked shift away from exclusionary rhetoric.

While the previous site prominently displayed the church’s doctrinal stance against homosexual activity on its homepage, the new materials feature the stories of gay members. “Church Teachings” is located on a separate page; roughly 1,700 words and five videos on “loving one another” precede the first direct statement that “homosexual activity is a sin.”

Still, the webpages are housed in a section of the church website dedicated to helping members deal with life’s “many challenges,” including “abuse,” “disabilities,” and “suicide.”

Fulmer, who self-identifies as a gay Mormon and is featured on the new website, said the new materials “give us a stepping stone to have more open communication about this and to educate others on how to help and how to respond to somebody who is gay.”

Trevor Johnson, a gay man who was raised Mormon but resigned his membership after getting engaged, said, “When I first came out, the most damaging thing was feeling like people didn’t believe me that I was attracted to men. I appreciate that the church is releasing materials that validate the reality of the homosexual experience.”

Senior church leaders L. Whitney Clayton and Von G. Keetch both say they have become more educated on homosexuality through their involvement in producing the materials — a two-year process which involved the church leadership, LGBT advocacy groups and mental health professionals.

Josh Searle, was an active, and closeted, member of the church until his mother’s suicide derailed him emotionally, leading him to leave his childhood faith. Soon, Searle began to date gay men. Searle’s story is also featured on the site.

“I had been in different relationships where I experimented quite a bit sexually,” he said, “and the thing is I enjoyed all of it… I thought ‘this is what it feels like to be in love.’”

Ultimately, Searle was drawn back to the church by a series of “spiritual experiences” which encouraged him to change the course of his life.

But his experience as a faithful gay Mormon hasn’t been easy. While he believes church leaders are trying their best to understand the LGBT community, he said they can’t understand the toll of celibacy.

“I wish there was content on how to be a celibate gay man in an emotionally healthy way. Human needs, intimacy, physical touch, physical connection… am I just supposed to not participate in any of that? I feel like I am starving for affection, starving for emotional intimacy. What is the answer to that?”

Fulmer agrees, lamenting her inability to have a family or an “intimate relationship [even though] I do have those feelings for women on a regular basis. Navigating those in a healthy way is very difficult.”

For Rosas, the answer is staying married to his wife, whom he lauds as a “rock star” and feels “genuinely attracted to.” Fulmer calls her confrontation with celibacy a “beautiful heartbreak,” but says she is open to heterosexual marriage if it is God’s will, while Searle says he has never been attracted to women. Even in an afterlife, where Mormons say “all will be made right,” Searle hopes his love for men isn’t changed.

While the church once regarded homosexuality as “curable” and encouraged members to be “forced” into heterosexual marriages, the church has backed off of this recommendation. “Mormon and Gay” leaves the question of future relationships for Fulmer and Searle open-ended, saying they don’t know what the future holds.

“It is important for us to know what more we can do,” said Clayton. “I’m sure there will be [future updates] as we try to understand how to reach out in a successful way.”

Living as a gay Mormon

In a church founded on the concept of continual revelation, many members question what those “future updates” could be — including whether the church will revoke its controversial policy on the children of gay parents.

Prior to 1950
Homosexuality regarded by church as “sin that dare not speak its name” 1952
“Homosexuality” is used publicly by a senior church leader for the first time, called an “abomination” comparable to masturbation and bestiality1969
Homosexuality regarded as “curable” by a senior church leader; being “forced” into heterosexual relationships is encouraged 1976
Church-sponsored Brigham Young University conducts electroshock therapy for 14 gay Mormons1978-81
Church faces public backlash for opposing Equal Rights Amendment, arguing it could extend legal protection to “lesbian and homosexual marriages” 1990s
Leaders begin referring to homosexuality as same-gender attraction, acknowledging the reality of sexual attraction while condemning the sin of acting on those feelings 2008-09
Church attempts to balance “religious liberty and nondiscrimination” in political advocacy, campaigning against legalization of gay marriage in California and supporting a nondiscrimination ordinance in Salt Lake City2012
Church uses “gay” for the first time in public communications. In a series of videos on “Mormons and Gays,” leaders ask members to “find common ground” while “being true to religious beliefs”2015
“Handbook of Instruction” for church leaders is updated with a new policy barring children of same-sex couples from church baby blessings and baptism. Same-sex marriage is regarded as apostasy and grounds for excommunication2016
Church launches new “Mormon and Gay” section on its official website, in which Mormon leaders call for increased dialogue about homosexuality, and gay Mormons share their experiences as active, celibate church members

Last November, the church updated its Handbook of Instruction for bishops around the world with a new policy barring children of same-sex couples from church blessings and baptism. The policy also affirmed the long-held Mormon stance that same-sex marriage is considered apostasy and grounds for excommunication.

The policy was leaked online and quickly garnered intense public scrutiny. In an attempt to abate the firestorm of criticism, senior church leader D. Todd Christofferson, emphasized that love was behind the decision to protect children from feeling conflicted between their family and their faith. Christofferson, who has a gay brother, also led the creation of the “Mormon and Gay” website, according to a church spokesman.

But none of the top church leaders ordained to the highest level of the priesthood have commented on the new materials, something Mayne said is indicative of a wariness towards a perceived “gay agenda” at the highest levels of the church.

Mayne said leaders “think gay marriage is an act of defiance, but this couldn’t be farther from the truth.”

He hopes the church’s top leadership will speak with homosexual married couples to understand that “a gay couple is really two Mormon people hoping to come as close as possible to everything that we value and hold dear as a religion: families, committed relationships, loving one another. Yet we slap them into disciplinary councils and excommunicate them.”

However, the church has publicized the release of the new materials, sending links to the site in an email blast to lay clergy around the world. In 2012, the “Mormons and Gays” was released without fanfare, leaving members to doubt that the church was responsible for its creation.

Also last week, “Mormon Newsroom,” an official church website, posted a series of video messages, including one from Christofferson, on the need for greater inclusion.

Though the top priesthood leaders did not mention homosexuality, Facebook users quickly interpreted their messages through this lens. Comments on the post reveal a stark divide in public opinion amongst church members on the topic — a debate that has been particularly heated since last November.

Facebook user Justin Marks said, “I only wish that the love and inclusion spoken of in these videos was the lived experience of so many LGBTQ+ people who’ve been raised in the church. Maybe this is a step in the right direction.” Marks identifies on his Facebook page as both gay and Mormon.

Another user, Ezra Alma M, replied, “God’s laws are clear. But we can still be nice to people that don’t keep the commandments.”

This exchange reveals the inescapable tension faced by a church attempting to both condemn same-sex marriage and include gay members — all while navigating a tide of increasingly antagonistic public opinion.

Clayton said, “We can’t do everything for everyone — what we have done is a good step in the right direction.”

Devotion and despair: The lonely struggle of a gay Mormon