Obama admits to laughing at Trump during debates

He poked fun at Donald Trump

He’s castigated Donald Trump as a dangerous demagogue whose claims of a rigged election are eroding US democracy. But President Barack Obama said Monday his most common reaction to the GOP nominee is just to laugh.

During a taping of ABC’s “Jimmy Kimmel Live!” television program, the late-night host asked the President if his response to the Republican during the presidential debates was to let out a chuckle.

“Most of the time,” Obama responded to cheers.

Later, detailing the responsibilities of his job, Obama declared: “I don’t tweet at 3 a.m. about people who insult me.”

It was only the latest in a string of hits from Obama on Trump and Republicans as Election Day nears. Speaking aboard Air Force One Monday, White House spokesman Josh Earnest said Obama would be campaigning ardently for Democrats in the coming days.

“The President will spend a significant amount of time traveling next week in support of not just Secretary Clinton’s presidential campaign, but Democrats further down the ballot, as well,” he said. 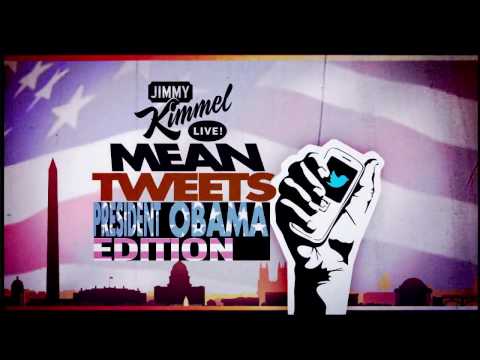 In his appearance on Kimmel’s show, Obama made the case for Clinton, but also participated in the show’s tradition of reading mean tweets about himself aloud.

One example: “Barack Obama … bro, do you even lift?”

“Well, I lifted the ban on Cuban cigars, that’s something,” Obama retorted.

And he detailed with some wariness his post-presidency life spent in Washington, where he and his family will live until their youngest daughter finishes high school.

“I’m like the old guy at the bar where you went to high school,” he joked. “Just kind of hanging around, it’s like shirt’s buttoned a little too low, still think he’s cool.”