Gives an unprecedented view of our galactic neighborhood

Scientists have used two of the world’s largest telescopes to produce a new, super-detailed map of our galaxy.

Astronomers in Germany and Australia charted hydrogen – the most abundant element in space and the main component of stars and galaxies – to give an unprecedented view of the Milky Way.

The map shows the concentration of stars and dwarf galaxies across the skies.

A map of the Milky Way showing concentrations of hydrogen. The Magellanic Clouds can be seen at the lower right.
Benjamin Winkel and the HI4PI collaboration

“We’ve been able to produce a whole-sky image that in many ways is greater than the sum of its parts,” Lister Staveley-Smith of the International Center for Radio Astronomy Research (ICRAR) told CNN.

“The new map gives us a much more coherent view of the sky and enables a better understanding of the Milky Way.”

Naomi McClure-Griffiths from the Australian National University (ANU) said the study revealed for the first time the fine details of structures between stars in the Milky Way.

“Very small gas clouds appear to have helped form stars in the Milky Way over billions of years,” she said in a statement.

She said the map would be used to answer the big questions about the Milky Way and neighboring galaxies.

“How does the Milky Way get the new gas it requires to continue forming stars? And where are all of the small dwarf galaxies that must surround our Milky Way? The next steps will be exciting,” she said.

Data from telescopes in Germany and Australia was used to create the Milky Way hydrogen map.
Benjamin Winkel and the HI4PI collaboration

The team used the Parkes Observatory in Australia and the Effelsberg 100m Radio Telescope in Germany, carefully matching results in overlapping scans of the sky.

“The data processing was an even greater task as we had to write our own software packages to carefully calibrate the data and subtract out spurious signals at each point in the sky,” Staveley-Smith said.

“Tiny clouds become visible that appear to have fueled star formation in the Milky Way for billions of years,” he added in a statement.

“These objects are too dim and too small to be detected even in the other galaxies closest to us.” 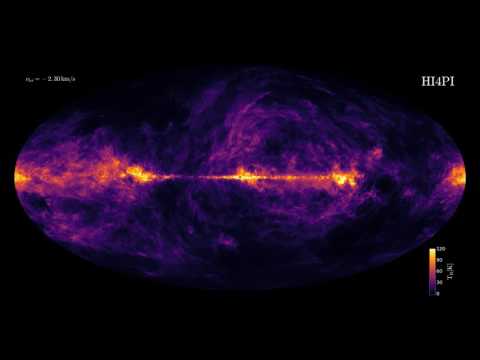 Containing up to 400 billion individual stars and with a diameter up to 180,000 light years across, the Milky Way is our galactic home, but we’re far from the center of the action.

Our solar system is located around 27,000 light years from the Galactic Center, where a supermassive black hole is believed to sit.

Our detached location gives us a fantastic view of the galaxy, and the neighboring Andromeda and Magellanic Cloud galaxies, all of which can be seen in the new map.

Light pollution makes the view difficult to see from much of Earth however: 80% of Americans can’t see the Milky Way at all.

The new map is the latest example of huge advances made in astronomy in recent years, thanks to new telescopes and data processing techniques.

In July, a South African telescope revealed hundreds of of galaxies in a tiny corner of the universe where only 70 had been seen before, while this month the Hubble Space Telescope upped the total number of observable galaxies to 2 trillion.

Earlier this year, a team working with the APEX telescope in Chile produced a stunning new image of the Southern Hemisphere of the Galactic Plane, where a majority of the Milky Way’s mass lies.

Staveley-Smith said the Milky Way map will form the basis of future studies of our galaxy, such as an upcoming project using China’s new 1,640 foot wide FAST dish, which began operations in September.