On the horizon, a ‘ghost ship’ appears

Haunted ship sightings aren't unheard of in the region

But there's a perfectly good scientific explanation for this

Perhaps the Flying Dutchman is haunting the Great Lakes for Halloween this year?

This video of a hazy blur in Michigan’s Lake Superior has the Internet abuzz.

A local videographer was filming a rainbow when he spotted the shimmering “ghost ship” off the rocky shore of Presque Isle Park in Marquette.

Jason Asselin was in the area to shoot a music video for alternative rock artist Kevin B. Klein when the crew called it a day to enjoy the sunset on the shore.

Asselin told CNN he watched what looked like a massive “ghost ship” bob on the choppy waters for nearly half an hour before it vanished. 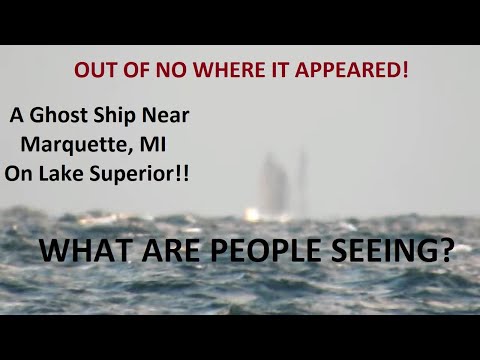 Haunted ship sightings aren’t unheard of in the region.

There are more than 6,000 known shipwrecks in all of the Great Lakes, and more than 200 just in the 80-mile stretch of Lake Superior off Whitefish Point, not far from where Asselin shot the video. That’s according to Great Lakes Shipwreck Museum Executive Director Bruce Lynn.

“If there was a ghost ship sighting, this would be the place for it,” Lynn told CNN.

Ghost ship sightings are a part of the culture and tradition of the Great Lakes, said local maritime historian Frederick Stonehouse.

Some said they spotted spectral sailors off the coast of Whitefish Point after the Edmund Fitzgerald shipwreck in 1975, Stonehouse said.

In this case, science offers a more plausible explanation.

The shimmering image is very likely the Granite Island lighthouse, about eight miles of the coast of Presque Isle.

The same way the moon appears to be massive when it rises on the horizon, the video may have captured a much smaller object that’s playing tricks on the viewers’ eyes, said Mark Becker, an associate professor of psychology at Michigan State University.

Becker explained that without depth cues, our eyes have no way of identifying how far an object is. The human brain “tends to try to make sense out of what our eyes send to our brain,” Becker said.

Regardless, the “ghost ship” will live on to haunt Lake Superior – at least in some minds.

“Whatever you believe in your mind, that’s what it was,” Asselin said. “That’s what life is about—dreaming.”